The C.J. Wilson Gambit Versus the Joba Burial

Share All sharing options for: The C.J. Wilson Gambit Versus the Joba Burial

For the second time in three starts he received the kind of bullpen support that could only be explained by having run over the manager's dog repeatedly, but before all hell broke loose on Thursday night, C.J. Wilson delivered another strong postseason start for the Rangers. At the outset of the ALCS, I discussed the bold gamble the Rangers made in converting Wilson, a 29-year-old lefty with 252 big-league relief appearances and just six starts under his belt, into a starter this spring. The move paid off handsomely, as Wilson went 15-8 with a 3.35 ERA (3.56 FIP, 4.18 SIERA). Though he led the league in walks allowed (93, 4.1 per nine), he missed plenty of bats (170, 7.5 per nine) and was the Rangers' most valuable starter over the course of the season — not an ace, but that's why Texas went out and traded for Cliff Lee in early July. 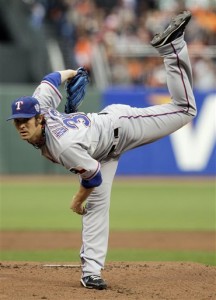 The Yankees' unwillingness to gamble on Joba Chamberlain the way the Rangers have on C.J. Wilson is one reason why they're watching the World Series instead of playing in it (AP).

It's hardly a perfect parallel, but Wilson's fine start — six innings, three hits, two runs, four strikeouts, but a giant goose egg worth of offensive support — kept me thinking about this week's Joba Chamberlain news long past the point that Ron Washington brought a spork to a late-inning knife fight. After more than a decade of rotation futility, not to mention trades that cost them Chris Young, John Danks and Edinson Volquez, the Rangers had some moderate success in 2009 by upgrading their defense behind a flock of pitch-to-contact types. Knowing that those guys aren't great bets for long-term success (Scott Feldman 2009: 17-8, 4.08 ERA; Scott Feldman 2010: 7-11, 5.48 ERA), they made the decision to shift to a more power arm-oriented rotation for this year. They did so via a failed first-round supplemental pick who'd finally found some success in Japan (Colby Lewis) as well as their former closer, and it cost them almost nothing relative to signing a John Lackey or an A.J. Burnett, or even trading for a Javier Vazquez. Wilson made $3.1 million this year, his second year of arbitration eligibility. Lewis made $1.75 million plus incentives in the first year of a two-year, $5 million deal. Burnett made more than those two combined over the final to months of the season while putting up a 6.61 ERA in a dozen Jeckyl and Hyde starts.

Joba Chamberlain is five years younger than C.J. Wilson, and six years younger than Colby Lewis. While he missed a month in 2008 with a shoulder strain, he's never had elbow surgery (Wilson, bone spurs, 2008) or shoulder surgery (Lewis, rotator cuff, 2004; exploratory, 2004). Even once you adjust for the difference between going all out in a one-inning appearance and pacing yourself over five to seven frames, his fastball has more zip than either pitcher had at this stage of their careers, and he's got a deeper arsenal of good breaking stuff. He is, in short, more physically gifted than either pitcher, and not by a little.

And as I went to great lengths to point out in my last post, while he had his lapses Chamberlain did not actually have a particularly bad 2010 except in the luck department. Contrary to one commenter's assertion, he really wasn't hit especially hard. His line drive rate (18.0% according to the MLBAM data we use at Baseball Prospectus) was a hair lower than the AL average (18.6%) and was actually down from 2009 (19.1%). His rate of home runs per fly ball (10%) was below league average (12.2%) and well down from last year’s rate, 15.6%), and that's while pitching half his games in a park which was the second-easiest in which to go yard. His isolated power (slugging percentage minus batting average) with runners in scoring position was exactly the league average. Basically, his stat line suffers from a handful of extra grounders that were turned into outs behind most MLB pitchers, the kind of thing that can fluctuate a fair amount from year to year.

Where Chamberlain may fall short is the mental side of things. This isn't to suggest he's dumber than Nuke LaLoosh, by any means. But his husky physique raises questions about his conditioning, his October 2008 DUI arrest at the very least speaks to occasional lapses of judgment, his body language — which has gone from chest-thumping, fist-pumping confidence to slump-shouldered, forehead-wrinkling confusion — is a mess, and he's not a player who offers particularly enlightening insights into his work (then again, neither does Derek Jeter). It's as striking a contrast to Wilson — who abstains from alcohol, and who's demonstrated a decidedly cerebral take both on pitching and life as he's taken a more prominent position in the spotlight — as the difference in their handedness or their 2010 roles. It sure as hell hasn't helped that the Yankees have shuttled Chamberlain between the bullpen and the rotation so often during his short career, and nobody's about to award departed pitching coach Dave Eiland the Dave Duncan Lifetime Achievement Award, or compare him to the Rangers' Mike Maddux, who's regarded among the top pitching coaches in the game, and who's the brother of the man widely referred to as The Smartest Pitcher Who Ever Lived.

My point is that the potential for Chamberlain to be an above-average starter, perhaps even an ace, on a winning ballclub is certainly there. Before they throw another hundred million dollars at the top free agent starter of the winter, or trade another promising prospect for the next Vazquez, a more resourceful team would make unlocking that potential a top priority. The Yankees are damn fools if they pass up that opportunity.

Think about it this way: wouldn't you kill to know how the Yankees' season could have turned out if Chamberlain, and not Burnett or the unrostered Vazquez had started Game Four in the ALCS? I know I would.

Quick Note
Please join us for the Pinstriped Bible chat at 1 PM Eastern, when Steven Goldman, Cliff Corcoran and I will field your questions with better grace than Vladimir Guerrero plays right field.