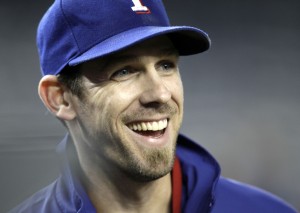 Cliff Lee: Let him do his laughing in Texas. (AP)

Even before last night’s Game 1 disappointment, I have been firmly convinced that the Yankees should not do what everyone expects them to do, and throw the gross domestic product of Luxembourg at the left-hander. In the last few years, Lee has become one of the great control artists of all time. And yet, he is also 31. He is at that same dangerous stage of life that so many other Yankees have reached, where the minor aches and pains of one’s 20s become the surgeries of one’s 30s. As with the A.J. Burnett contract, a Lee who is not in peak form will tie the team’s hands for years to come, soaking up dollars and a roster spot that would be better spent on the young.

And the Yankees do have youth, if they’re willing to investigate the possibilities presented by their own farm. None of the pitchers now maturing is likely to evolve into a Cliff Lee, simply because few pitchers can or will. Indeed, it is entirely possible that of the long list of possibilities such as Ivan Nova, D.J. Mitchell, Hector Noesi, David Phelps, Manny Banuelos, Dellin Betances, Andrew Brackman, and Adam Warren, all of whom pitched at Double- or Triple-A last year, the Yankees could go 0-for-8. Pitchers come quickly these days; of all the teams in the majors, it is only the Yankees who endlessly sit on pitching prospects in favor of veteran retreads like Dustin Moseley and Sergio Mitre—and to no good end. In 12 starts this year, Moseley and Mitre combined to go 4-6 and allow 42 runs in 64.2 innings (5.85 RA). It is unlikely that a qualified prospect would have been worse.

In fact, the prospects could have been a lot better. And while the proper comparison is not to the M&M boys but to Lee, the South’s Marble Man. The problem is in choosing which Lee to compare him to. Lee has a 3.85 ERA career ERA. Over the last three years, his ERA was an excellent 2.98, 40 percent better than league average. We should not necessarily expect him to be that good in the future. Yankee Stadium isn’t conducive to it, the DH league isn’t conducive. Age and injury are not conducive. The universe, which despises anything that isn’t average and normal and low-energy, isn’t conducive. You give a 31-year-old lefty a five- or six-year deal, you are, unless blessed, going to get five years of 2.98 ERAs. You might not get five years of 3.50. You’re also likely to get some extended DL time.

As in any casino game, when you bet on a pitcher, the odds are slanted in favor of the house. For teams with no other options, or a team geared up to win it all now and then sink back into the second division, giving a veteran starter a lot of money for too many years is a reasonable plan. That’s what the Mets did with Pedro Martinez, paying for four years when there was only a reasonable expectation that they might get two. In the event, they got one. Cliff Lee is younger than Martinez, and perhaps he’s a better bet health-wise, but there is no way to know for certain. The Yankees have choices, some of whom will be viable big leaguers three years from now, when whichever team signs Lee is trying to figure out the best way to get rid of him. The Yankees aren’t in that position. They have alternatives, choices they’ve spent good money on. Now is the time to test them and find the next Cliff Lee, or even the next Andy Pettitte. He could be lurking somewhere in the pile, and he won’t cost a fraction of what Lee does. If the Yankees leave Lee to others, they might even get to find out who he is.