What Wood Cashman Do?

Share All sharing options for: What Wood Cashman Do? 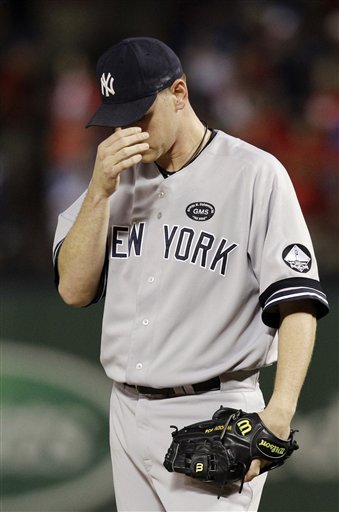 Cliff worries that resigning Kerry Wood would result in a lot more of this than the Yankees saw in 2010. (AP)

Just six days have passed since the Yankees were eliminated from the ALCS by the pennant-winning Rangers, but there has been plenty of news out of the Bronx over that span. Damaso Marte and CC Sabathia are going under the knife. The Yankees declined all three of the player options they held for 2011, and Joe Girardi re-signed with the team for the next three years, that last coming moments before I began writing this.

Jay already dealt with Sabathia's minor knee surgery, which is likely to have been more relevant to his past performance, including his inconsistency down the stretch and in the postseason, than it will be to his future performance and should be a footnote entering spring training.

Marte's surgery, which repaired a torn labrum in his pitching shoulder, was far more severe and is expected to keep him out of action until the final months of the 2011 season, thus solidifying the bust status of the three-year, $12 million contract he signed after the 2008 season (the Yankees hold an option for 2012, but are sure to decline it). For a more in-depth look at Marte's time in pinstripes, see my previous post on the subject here.

As for the three options, here are the terms:

The decision to decline all three was a no-brainer. None of those players are worth the associated salaries for 2012. Johnson isn't worth the price of his uniform. Wood's contract was paying him to close in Cleveland, not set-up in New York, and Berkman simply isn't the player he was when he signed his contract back in 2005.

Berkman's option was actually declined as a condition of his accepting the trade to the Yankees, as he was willing to accept a part-time role in pursuit of a championship, but wants to sign with a team that will make him an everyday player again in 2012. That answers the question of whether or not the Yankees will resign him (no, they won't). Obviously, Johnson won't be back either, not that he was really here very much to begin with. Brian Cashman was candid earlier this week, admitting that Johnson was "Plan C" for designated hitter coming out of last season, with Johnny Damon and Hideki Matsui being A and B, respectively (which is exactly how I interpreted the situation at the time), adding "that did not work out at all." Consider that a lesson learned about rolling the dice on Johnson's brittle bones.

Wood's option would have vested if he had finished 55 games in 2009 or 2010, but he finished just 50 in 2009 and a mere 19 this year due to time on the disabled list and the trade to New York. Of the three players whose options were declined, he's the only one who stands any chance of returning to the Yankees in 2012. He won't be back if there's a team out there willing to pay him to close, which there may well be (one club that jumps to mind is the Rangers, provided they decide to move Neftali Feliz into the rotation, which they should), but assuming there isn't, should the Yankees take him back at a reduced rate?

I'm dubious about Wood and actually think the Yankees dodged a bullet given the discrepancy between his performance and his results. Here's what I wrote about wood in my head-to-head comparisons of the bullpens of the Yankees and their playoff opponents:

Kerry Wood posted a 1.344 WXRL and 0.69 ERA with the Yankees, but he also walked 18 men in 26 innings. He was lucky. Opponents hit .236 on balls in play against Wood after he came over from Cleveland, and just 3.1 percent of his fly balls left the ballpark, down from a career rate of 8.6 percent. Meanwhile, he gave up fly balls and line drives more often than he had previously in his career.

Wood's high strikeout rates allow him to get away with more walks more than a less powerful pitcher could, but walking 5.7 men per nine innings, as Wood did in 2010, is playing with fire, and his home run rate is sure to shoot back up next year, particularly if he spends half of his home games pitching in the new Yankee Stadium. Wood will be 34 in June and has a extensive injury history, which begs an unwelcome comparison to Marte, who turned 34 soon after signing his current contract. There are better, younger free agent options available this winter (we'll get into those names in a future post) some live arms in the minor league system, and Alfredo Aceves is expected back after missing most of the 2010 season due to a bulging disk in his back. Given Joe Girardi's facility with building a bullpen on the fly, I don't see the need for the Yankees to take a gamble, however small, on an aging Kerry Wood.