Love The One You're With

Share All sharing options for: Love The One You're With 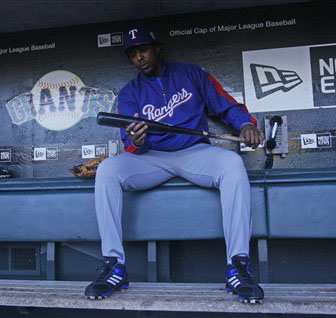 This sums up how Vlad Guerrero should be used in National League parks. (AP)

Starting the hobbled Vladimir Guerrero in right field would seem like an easy mistake to avoid. I wrote about it in my preview of Game 1 of the World Series yesterday. After watching Vlad stumble about out there in Game 1, Craig Calcaterra and Rob Neyer chimed in this morning, and my preview of Game 2 revisits the matter.

Ogando not only could be a key arm for the Rangers in this series, but he might have to be. Washington has primarily used Darren O'Day as a match-up ROOGY (right-handed one-out guy), and the only other righties in his bullpen are closer Neftali Feliz and Mark Lowe. Lowe was inexplicably added to the roster despite throwing just three regular-season innings for the Rangers following mid-season back surgery. He struggled in those three frames, and he was left off of both the ALDS and ALCS rosters.

Lowe and O'Day were both hit hard in Game 1, but Ogando dominated the Giants, working around a single while striking out four in two scoreless innings. The catch is that he did so with his team trailing 8-4, continuing a trend that has seen him make just one appearance in this postseason with the Rangers leading or trailing by less than four runs. If Washington wants to give his team its best chance to win, he needs to keep Guerrero out of his outfield and be willing to use Ogando in high-leverage situations.

For that vocal minority of Yankee fans who disapproved of the Yankees re-signing Joe Girardi earlier today, consider what your reaction to Washington's management of Guerrero and Ogando might be. Familiarity breeds contempt when it comes to managers. Washington is the toast of the town right now, but if a Guerrero misplay costs the Rangers a game (his misplays gave the Giants three extra bases in the ninth inning of Game 1 alone), and the Giants go on to win this series, I think the attitude toward him, both inside and outside of the Metroplex, will take on a very different tone.