Perhaps the most dispiriting piece of news to come out of Monday's postmortem press conference with Joe Girardi pertained to the fate of Joba Chamberlain. Said the Yankee manager, "We consider him a bullpen guy in the back half of the bullpen." Even if he's talking about the half which saves games as opposed to the half which produces fertilizer, that pronouncement would appear to indicate that the Yankees no longer view the 25-year-old righty as a candidate for next year's rotation. If so, it's a colossal waste of resources. 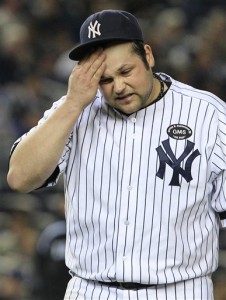 The Yankees have created their share of headaches for Joba Chamberlain (AP).

Superficially speaking, Chamberlain did not have a great 2010, though he stayed healthy and pitched in 73 games, the highest total on the team and the fifth-highest total in the league. It was a rollercoaster ride that began with him competing for the fifth starter job in spring training, but he was pummeled for a double-digit ERA in Grapefruit League action, and lost out to Phil Hughes. Moved to the bullpen, he began the year as the Yankees' eighth-inning guy, and despite a couple of early hiccups, got off to a decent start, putting up a 2.16 ERA through May 14. He soon fell into a funk, however, and from that point until the end of July, he was torched for a 7.62 ERA. Still, Girardi stuck with him in the eighth-inning role, because he could; the Yankees were in first place despite his struggles.

On July 31, the Yankees traded for Kerry Wood, a move that brought some much-needed order to the bullpen. Wood quickly assumed the eighth-inning role, and with David Robertson coming around as well, Chamberlain was bumped lower in the pecking order, sometimes pitching the sixth or seventh to protect a lead or keep a deficit close, other times pitching in lost causes. He actually pitched reasonably well in this stretch, though he was scored upon in four out of six games during the final two weeks of the season — a time of year when it seemed nothing went right for the Yankees. Further evidence of Chamberlain's diminished stature came when he was left watching the Division Series from afar. When he pitched in the League Championship Series, it was strictly mop-and-bucket duty; in the three games he pitched, he entered with the Yankees down three to five runs.

Overall, Chamberlain's 4.40 ERA — two percent worse than the park-adjusted league average — wasn't much to write home about, but even the most cursory look at his peripherals will tell you it's not a true indication that he pitched poorly. He struck out well over a batter per inning (9.7 per nine), walked less than three batters per nine (2.8) and yielded less than one homer per nine (0.8). His 3.5 strikeout-to-walk ratio was second on the team only to Mariano Rivera.

The most basic ERA estimator, Fielding Independent Pitching, suggests Chamberlain's ERA should have been 2.98, almost 50 percent lower than it actually was. Baseball Prospectus' SIERA (Skill Independent ERA), which accounts for the complex interrelationship between batted ball types, pegs him at 3.16, right in the same ballpark. BP's Fair Run Average, which accounts for baserunners inherited and bequeathed, and ignores the differentiation between earned and unearned runs, puts him at 4.01. So what happened to inflate his ERA? While the Yankees converted a higher percentage of balls in play into outs than any AL team except the A's, Chamberlain got a raw deal from his fielders:

BA-GB is batting average on groundballs, BA-FB is batting average on fly balls, BA-LD is batting average on line drives. Nearly all the groundballs are singles, balls that could have been handled with better luck and/or positioning. On the other hand, the flyball contingent includes about 90 percent of the home runs pitchers allow and is therefore less vulnerable to the impact of fielders (homers are not included in the calculation of BABIP). The line drive contingent includes the rest of the homers and the majority of the doubles and triples a pitcher surrenders. Chamberlain had bad luck in two of the three categories, and those fluffed up his ERA.

Looking at it another way, sequencing played a part in inflating Chamberlain's ERA, given that he pitched disproportionately poorly with runners in scoring position. Batters hit .279/.344/.430 in such situations, whereas they hit .259/.342/.400 against the average AL pitcher. He actually walked fewer hitters than expected under such circumstances, and was no more vulnerable to the extra base hit; his isolated power (slugging percentage minus batting average) was exactly average. Again, he was basically done in by a high BABIP, .361 in that split, compared to .292 for the average AL pitcher. Given the small sample size in play, the difference is just a few runs, but those few runs played a big part in the way his performance was perceived.

For all of the bad luck, there's no mistaking the fact that the 2010 edition of Chamberlain was a different pitcher than the young fireballer who dazzled the AL during his late-2007 run. His average fastball was about two and a half miles per hour slower, and he generated only about half as many swings and misses on all of his pitches as he once did (from 16.4 percent of all pitches in 2007 to 9.4 percent this year — and that's up from 7.2 percent in 2009). Not that it was terribly realistic for anyone to expect him to maintain that small-sample stretch of dominance once the AL got a good look at him; nobody puts up 0.38 ERAs while whiffing 12.8 per nine for very long, in case you just arrived here from Mars expecting otherwise.

Joba's late 2008 shoulder strain may have had an impact on his performance, but what really stands out is the way the Yankees' manipulation of him in an effort to limit his innings really made a mess. Consider Chamberlain's career as broken down by these various phases:

The sample sizes aren't equal, but they do coincide with various turning points in Chamberlain's handling. Looking at these breakdowns, he's really only suffered one truly bad stretch in his career, that during the final two months of the 2009 season when the Yankees began pushing his turns back a few days or pulling him early. Chamberlain simply didn't adapt well to that circumstance; his walk rate soared, his strikeout rate dropped, and he became increasingly vulnerable to the home run ball. Unimpressed, the Yankees kept him out of their postseason rotation, and while they managed to win a World Series that way — starting CC Sabathia, Andy Pettitte and A.J. Burnett on three days' rest when necessary — they reinforced the notion that Joba was somehow not cut out for starting duty. They went into this spring pitting him directly against Hughes for a starting spot and throwing unworthy jokes like Sergio Mitre and Chad Gaudin into the fray just to make it appear like an open competition. Hughes won the job and thrived for awhile; he also handled the inevitable workload-related slowdown late in the year a bit better than Chamberlain had. But after a strong start against the Twins in the Division Series, his shaky performance in the ALCS went a long way towards the Yankees' elimination at the hands of the Rangers.

With Sabathia, Burnett and Hughes the only starters from this year's rotation under contract for 2011, the Yankees are left with two vacancies. They hope one will be filled by Pettitte, who even at the age of 38 pitched some outstanding ball, though injuries took a big chunk of his season and, we're now learning, played a major role in the way Girardi lined up his rotation against Texas. They hope the other will be filled by Cliff Lee, who according to the script is supposed cast aside not only the good feelings that come with winning a pennant or a World Series with the Rangers but also his geographical ties (he's from Arkansas) and perhaps the desires of his family to come to the Big Apple, as if he hadn't already proven that he could pitch a team into the Fall Classic.

Neither of those are certainties, nor is the continued good health of any of the five involved. But even if they were, the Yankees appear headed towards a situation where roles are dictated by salaries instead of abilities. Since Burnett, who put up a 5.95 ERA after the All Star break, is making $16.5 million a year while Chamberlain's merely eligible for arbitration for the first time, the latter — a pitcher who less than two years ago was considered to have three above-average pitches — will continue to be pigeonholed. Maybe he's being groomed as the heir apparent to Mariano Rivera, but the ageless one is still pitching as well as ever.

If the Yankees aren't going to start Chamberlain, they would do well to explore the trade market for him this winter rather than stash him in the bullpen, where his value is only going to stagnate, if not decline, as the notion of his relieverhood is further reinforced. There probably aren't five teams out there that wouldn't smack their lips and see a starter with mid-rotation potential, three plus pitches and a cheap price tag, offering in exchange something the Yankees could use more than J.O.B.A. (Just One more Bullpen Arm) — a blue-chip shortstop prospect capable of being groomed to take over for Derek Jeter, perhaps, and who knows what else, maybe a bona fide reliever who actually belongs in the bullpen. Not only would it be nice to see the Yankees do right by Chamberlain, whom they've put through more mind games during his short big league career than the average first-round pick has to endure, they'd be doing right by the future of the organization as well.