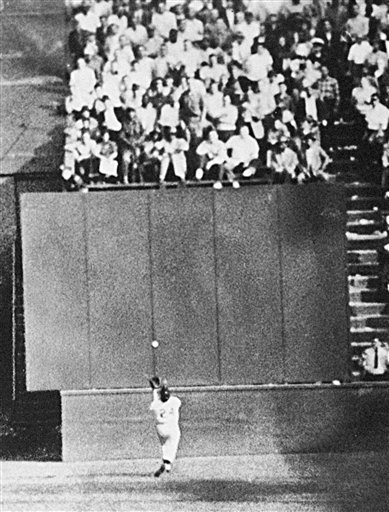 The last time one of this year's pennant winners won a World Series, this happened. (AP)

It's easy for New York-area fans, and Yankee fans in particular, to turn their nose up at this year's World Series pairing of the Giants and Rangers. After all, the Giants can't hit, and the Rangers are an expansion team that has never won anything. Such thinking misses the point. This is actually a matchup with significant historical implications. Consider this list of the teams that have gone the longest without winning a World Series:

If the Rangers lose this World Series, their drought will increase to 49 years, while the Giants will claim their first title since moving west 52 years ago.

Then there's Cliff Lee. You may be tired of hearing about him at this point, other than as a free agent target for the Bombers, but what he's done in his first two posteasons has been unprecedented:

Lee walked one Yankee in Game 3 of the ALCS, but in his previous four 10-strikeout postseason games, including both of his Division Series starts this year against Tampa Bay, he didn't walk a single batter, giving him exactly half of the eight 10-strikeout/no-walk games in postseason history. No other pitcher even has two. Included among those four games was Lee's domination of the Yankees in Yankee Stadium in Game 1 of last year's World Series while with the Phillies. Lee allowed one unearned run on six hits in that game and struck out 10. Setting aside his strikeouts, among pitchers with 60 or more career postseason innings, only closer Mariano Rivera and dead-ball-era Hall of Famer Christy Mathewson have lower ERAs than Lee's 1.26, and no one, not even Rivera, has a lower WHIP than Lee's 0.73.

The above is from my preview of Game One of the World Series over at SI.com. I've been previewing each day's playoff action over there all month and will continue to post previews of each World Series game. As for my pick: Rangers in seven.