Don't Trade Me, Bro': The Case for Nick Swisher

Share All sharing options for: Don't Trade Me, Bro': The Case for Nick Swisher 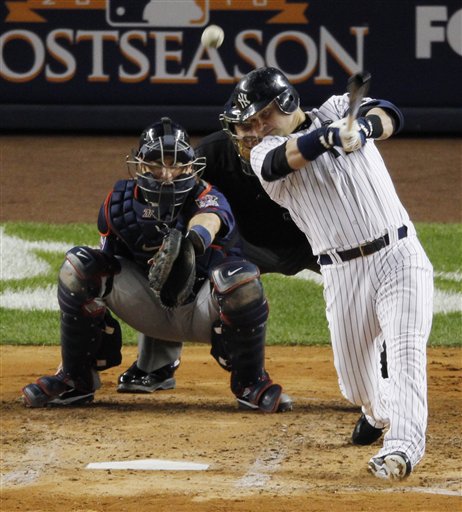 I don’t give much credence to most hot stove rumors and largely tune them out, particularly early in the season, when there’s not much going on and those rumors seemed designed as much to fill column inches and allow agents and general managers to jockey for position as to provide meaningful information to the fans. Still, sometimes a rumor puts forth a suggestion so bothersome that I feel compelled to respond. To wit, since the Yankees were eliminated from the playoffs last Friday, speculation has abounded about the Yankees' willingness to trade Nick Swisher in order to make room for one of the top free agent outfielders on the market this winter, specifically fellow right fielder Jayson Werth.

Most likely this is either pure, unsubstantiated speculation, or Brian Cashman's sly attempt to feel out the trade market on a player he doesn't intend to deal on the off chance one of his fellow GMs offers him a deal as good as the one that brought Swisher to the Bronx in the first place. I mean, seriously, why on earth would the Yankees want to trade Nick Swisher?

Swisher was the Yankees’ second-best hitter in 2010 behind MVP candidate Robinson Cano. He was 20th in the American League in VORP despite playing a position with an extremely high standard of production (VORP adjusts for position). He is a versatile player in that he’s a solid right fielder who can also play left or first base and is a switch-hitter without an obvious weak side (he has more power batting left, gets on base more often batting right). He’s an outgoing personality popular with fans, teammates, and management, a solid citizen who is active in charity, and a marketable minor star. He doesn’t turn 30 until Thanksgiving, and his current contract included an option for 2012 worth "just" $10.25 million, which is a bargain price for a player of his caliber (Baseball Prospectus’s MORP, Marginal value Above Replacement Player, projects that he’d be worth more on the free agent market every year through 2014, while FanGraphs’ Dollars figures he’s been worth considerably more in four of the last five seasons, his poor year with the White Sox being the obvious exception). Besides which, the Yankees got him for next to nothing and in his first two seasons in the Bronx they won the World Series then got all the way back to the ALCS, a combo the Yankees hadn’t pulled off since 2000-2001.

The rumor mill seems to be focusing on Swisher’s poor postseason performance (he has hit .148/.258/.321 in 94 postseason plate appearances as a Yankee), which seems to me to be a clear indication people are making stuff up. To begin with, after hitting .128/.255/.234 in the 2009 postseason, Swisher shed weight and rebuilt his swing with Kevin Long to correct a career-long inability to hit for average. It worked. This year, he surpassed his career high in batting average by 26 points, lifting the rest of his performance including career highs in total bases and slugging percentage. He then went 4-for-12 with two doubles and a homer against the Twins before slumping again the ALCS against the Rangers.

Never mind the excuse that Swisher hurt his knee down the stretch, it’s absurd to cut bait on such a valuable player based on six games, during which he did double and homer and walk thrice, and during which virtually no one else on the team did much of anything either save for Cano and one good game from Curtis Granderson. In fact, Swisher’s effort in response to his poor 2009 postseason is just another item in his favor, and goes in hand with the dedication that prompted him to seek out pitching coach Dave Eiland for help with his throws from the outfield the previous year.

There’s also a false dichotomy here. The assumption seems to be that signing Carl Crawford would require benching or trading Brett Gardner while signing Werth would require trading Swisher. That makes little sense. Much as I like Gardner, he should be the odd man out if either Crawford or Werth is signed as I’d rank him behind both Werth and Swisher in terms of overall impact. Yes, Gardner is younger, cheaper, and under team control longer than Swisher, and, despite those two facts, Swisher is likely to bring more in a trade because of the reliability of his performance and the size of his immediate impact, but if the Yankees would be willing to have both Crawford and Swisher, they clearly aren’t concerned about those factors and should be willing to have both Werth and Swisher.

The only reason to prefer Gardner over Swisher, if age, contract, and trade value aren’t concerns, is defense. Signing Werth and benching or trading Gardner would diminish the quality of the Yankees’ outfield defense, but that’s more a credit to Gardner than a shot at Werth, who is an excellent defensive outfielder (UZR didn’t think much of him this year, but it loved him the last three, and single-season flukes are not uncommon in defensive stats). I can see the allure of having Gardner, Granderson, and Werth combine to form one of the best defensive outfields in the game, if not the best, but choosing Gardner's glove over Swisher's bat seems like putting the cart before the horse given that Swisher's hardly a butcher in the field and Werth and Granderson are at the very least very good out there.

Consider instead a 2011 Yankee squad that has Werth, Granderson, and Swisher in the starting lineup with Gardner, who won’t be arbitration eligible until after the 2011 season, as one of the best fourth-outfielders in the game and a crack defensive replacement/pinch-runner. With that arrangement, if the Jorge Posada/Jesus Montero DH/catching rotation breaks down, Swisher could fill the DH slot and Gardner could slide into left field giving the Yankees the best of both worlds. The big question here is not whether the Yankees should trade Swisher, it's clear to me that they shouldn't, but whether or not the Yankees really need to concern themselves with Werth or Crawford given the other demands that will be placed on Brian Cashman’s time and the team’s budget this offseason. That is a topic we’ll address in the coming weeks, but even if they do reel in one of those big fish, there’s absolutely no reason for them to throw Swisher back.