Share All sharing options for: CC's Knee: No Big Thing 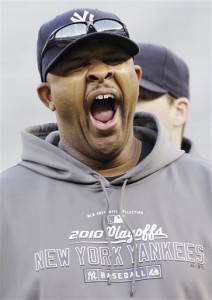 CC Sabathia demonstrates the proper tack to take regarding the news of his upcoming knee surgery (AP).

With each passing day, the reasons behind the Yankees’ postseason rotation problems come a bit more into focus. On Monday, we learned that Andy Pettitte was bumped to Game Three of the ALCS instead of his usual Game Two slot because his back tightened up late in his Division Series start, and he had to cut short a subsequent throwing session as well. Thus Joe Girardi and company felt it best to give him the extra rest, and he was fated to match up against Cliff Lee instead of being in position to bring the Yankees back to New York up 2-0.

Late Tuesday night came the word that CC Sabathia will undergo arthroscopic surgery to repair a torn meniscus in his right knee. Suddenly his postseason woes — a 5.63 ERA and three homers allowed in 16 innings over three starts — make considerably more sense. The big fella was likely pitching through some amount of discomfort which affected his delivery at least to some extent. Whether he injured it while diving to tag Nelson Cruz out at the plate following a wild pitch in the first inning of Game One or hurt it somewhere else along the way is unclear [late note: he says it bothered him most of the year]. His recovery time is being listed as three to six weeks, meaning he’s in no danger of missing the start of spring training, let alone the regular season.

Nonetheless, the news that Sabathia needs surgery has predictably set off panic in the streets among fans who see an expensive rotation disintegrating before their eyes, self-styled nutrition experts suddenly concerned about the number of cheeseburgers Sabathia consumes in a year (as if he were moonlighting on the competitive eating circuit), and mainstream media columnists champing at the bit to illustrate their mastery of the Yankees’ need to throw eleventy-million dollars at Cliff Lee. This is the beginning of the end for that fat, overpaid out-of-shape bum, the thinking goes, and if you think having to pay A.J. Burnett for three more years is bad, wait until Sabathia decides not to opt out of his contract after 2011 and leaves the Yankees on the hook for four years and $92 million. Boy, he’ll sure be able to buy a lot of cheeseburgers with that kind of money…

Somebody shoot that guy, please.

If there’s one thing I learned by reading literally a thousand of Will Carroll’s "Under the Knife" columns at Baseball Prospectus over the years, it’s that there are aren’t very many surgeries in baseball which rate as more minor than that this type. "Scrape and tape" is the term Will used for such instances, and it was hardly uncommon to see a player need such surgery early in spring training and be ready by Opening Day, or find his way back into action in scarcely longer than it takes to complete a 15-day DL stint and a weekend rehab assignment. Torn ACL, patellar tendonitis, arthritic change in the knee? Those, friends, are problems worth lying awake at night worrying over. Assuming that we’re getting the whole story, and that there’s nothing more on Sabathia’s MRI, this does not qualify as a big problem. As I understand it, Sabathia is particularly fortunate as it’s on his landing knee, which bears less force during delivery than his back knee, which is charged with supporting his weight at the outset of his windup.

Yes, Sabathia is a big dude; the Yankees’ roster lists him at 6-foot-7 and 290 pounds. But calling him fat is out of line, because chances are, he’s in better shape than you are (how many innings did you throw last year, sport?). One doesn’t average 240 innings of All-Star caliber work over a four-year period without tremendous physical ability — strength, agility, and the ability to unfailingly repeat your delivery 110 or 120 times a night while keeping the ball out of hitters’ happy zones.

I go back to an email exchange I had with a colleague back when the Yankees signed Sabathia in December 2008. Said colleague didn’t like the deal very much, panning it in his column; more to the point, while he didn’t mind the first three years preceding the opt-out phase of his contract, he wanted no part of the deal’s ample back end. I challenged him on it. Here’s what I wrote, with only minor edits:

You’ve already decided that Sabathia won’t be a good investment due to his size (as you just wrote and as you’ve written before) and look to be reaching for something to support that beyond your gut instinct about his gut. You appear content falling back on a prejudice that’s equating his being a jumbo-sized athlete with his being a grossly out of shape slob, or eating his way there in rapid time.

On the face of it no pitcher is a good investment due to the injury risk, so you’re at least half right, but it’s important to separate skittishness about giving a long-term contract to ANY pitcher from the specifics of Sabathia’s case. All we really know is that Sabathia is very good now, with a strong track record of successful performance — including an impressive uptick over the past three years — and a negligible history of injuries, particularly arm injuries. Despite his immense size, he’s a very good athlete, and he doesn’t have any red flags regarding his delivery. Nor does he have an especially Ruthian appetite for self destruction, and on the contrary gets high marks for makeup.

Based on all of that, can you say that he has more risk factors than any of the other pitchers who have gotten $100+ million contracts (Mike Hampton, Kevin Brown, Barry Zito, Johan Santana)? Can you say he’s got worse odds of making it through the next six years than sloppy fat party animal David Wells did of pitching effectively into his 40s? It’s doubtful, though we’re betting on an unknown against a known that’s already in the books, and the stakes are certainly higher in this case than they ever were for Wells or his potential employers.

None of us truly know the answer to those questions, but I don’t see anything that’s based on evidence in hand which says that he can’t, unless one insists upon invoking the aforementioned prejudice. On the other hand, we’ve got enough freaks that could fill a circus who can testify that the ability to pitch at an elite level comes in all shapes and sizes — Tim Lincecum, Pedro Martinez, Randy Johnson, Wells, Mickey Lolich, Rick Reuschel, Fernando Valenzuela, et al. Those guys are outliers, and so is Sabathia.

I stand by that just as much today as when I wrote it nearly two years ago, because I keep coming back to the fact that there's no evidence to suggest we should be worrying more about Sabathia simply because of his size. You want something to worry about when it come to the Yankees’ 2011 rotation? Worry about A.J. Burnett rediscovering the form that led the Yankees to sign him for five years. Worry about whether Pettitte’s body, mind and family will let him make another lap around the American League with as strong a form as he showed in the first half of 2010. Worry about whether Lee’s Arkansas background and the Rangers’ new ownership and new-found cable windfall give them a leg up in signing him. Fretting about Sabathia at this stage is fretting simply for the sake of fretting. We've all got better things to do this winter.

Update: as @cephster reminds me via Twitter — but as strikingly few reporters (Mark Feinsand being one) pointed out initially — Sabathia underwent a similar surgery on his right knee after the 2006 season. On the one hand, this is a bit more evidence that he's vulnerable to such problems and that if he continues to shed cartilage, it could have a greater impact on his long-term prognosis. On the other hand, he came back strong enough following that surgery to win the 2007 AL Cy Young and to start the four-year, 240-inning per year run I reference above.