Share All sharing options for: The Phony-Baloney Jeter Shuffle

With the exception of Sirius-XM’s baseball channel, I avoid sports talk radio. The lack of rational analysis gets my blood pressure too high. Every now and again, though, friends who haven’t gone through AM detox like I have will call and say, "What do you think of the plan to move Jeter?" I will sputter through my coffee, "W-what plan?" It is only then that I find out that this "plan" did not originate with the Yankees but with some host that was talking out of his best asset. 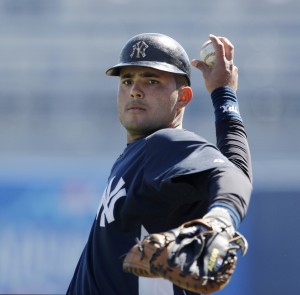 Jesus Montero: Moving Jeter off of shortstop means killing the future for the sake of the past, but that's not the only problem. (AP)

We’ve covered this point here before, but since the zombified masses are apparently being indoctrinated in this way of thinking, it’s worth revisiting: moving Jeter makes no sense. If you advocate a position change for him, what you’re really saying is, "I don’t believe the Yankees should re-sign him."

First, at the most basic level, the positions that he might move to are severely circumscribed. To just deal with the most ludicrous possibilities first, Jeter isn’t going to learn how to catch at this late stage of life, and center field is similarly unlikely. We can also cross off first and second base, because he isn’t going to displace Mark Teixeira and Robinson Cano. We are now left with third base, home of Alex Rodriguez, designated hitter, and the outfield corners. Let’s deal with the A-Rod scenario first, as that is one that was supposedly expressly advocated: Jeter moves to third, Rodriguez becomes the designated hitter, and "someone else" takes over at shortstop.

This idea is… well, I’d like to put this delicately: stupid. By attempting to cope with defensive problems on the left side of the Yankees’ infield, a noble goal, proponents are ignoring all kinds of difficult realities. First, designated hitter is the easiest position to fill, shortstop the hardest. Anyone can DH regardless of position, whereas you would prefer that someone with a real shortstop’s glove play that position. Sadly, Troy Tulowitzki is not a free agent this offseason, and Hanley Ramirez, whose glove-work wouldn’t thrill you any more than Jeter’s does, is unlikely to be traded. Cesar Izturis is a free agent and he’s a nice fielder, but he can’t hit at all. Edgar Renteria will likely be a free agent after the World Series (the Giants are spectacularly unlikely to pick up his $10.5 million option), but his range was never great and he’s hit .264/.316/.360 over the last three season.

Alternatively, the Yankees could replace the dislocated Jeter with in-house option Eduardo Nunez, who just might be able to hit .275 in the majors, albeit without any kind of patience of power. Now that we have some idea of the field, let’s rewind: the average major-league shortstop hit .262/.319/.374 this year, so Jeter, in all his ground-ball glory, was still ahead of the pack. The average third baseman hit .263/.324/.418, so even if Rodriguez’s season was disappointing by his own standards, he was still a tremendous asset. Finally, the average DH hit .250/.330/.422. That number is going to go up, as the field was ragged down by several teams that, incredibly, couldn’t get anything out of their designated hitters. Mariners designated hitters batted .194/.269/.340, which has to be a record for the worst production out of the position. The Yankees will be more interested in the kind of production the Red Sox got from David Ortiz, the Orioles from Luke Scott, the Twins from Jim Thome, and the Rangers from Vladimir Guerrero.

Alex Rodriguez could supply that kind of production, but there is good reason to expect that some combination of Jorge Posada and Jesus Montero could do the same, and at less cost to the rest of the offense. Consider this hypothetical, with appropriately imprecise numbers: Jeter moves to third and is replaced by Oakland’s Cliff Pennington, who at .250/.319/.368 was about the average shortstop on offense this year but was above-average on defense. Assuming that both players are consistent on offense, you’re down 10 runs on the exchange. However, let’s say that Jeter was approximately 10 runs below average on defense and Pennington was 10 runs above. You’re still up ten runs. Hooray, right?

It’s not that simple, though, because you’ve put Jeter’s bat on third, never mind that we have no idea if he can play third even as well as an arthritic A-Rod; this is a guy whose reaction time has always been a problem, and third is a position in which fast-twitch reflexes are everything. Again, if we assume offensive consistency, the Yankees would have dropped 30 runs on that exchange. We can’t know what Jeter will do defensively, but it is not an unreasonable degree of skepticism to suggest that he won’t turn into Graig Nettles in his prime. Let’s say he’s five runs below average. Altogether, the Yankees are down 25 runs, or roughly three wins.

Alex Rodriguez becomes an above-average producer at DH, but not to the same degree he would have been at third, unless we assume (A) his first 40-plus home run season since 2007, or (B) all the other AL teams fire their Luke Scotts and David Ortizes and sign the closest thing they can find to Milton Bradley. Worse, Rodriguez would have blocked Posada and Montero, leaving the former behind the plate for more games than is useful at this stage of his career and the latter at Scranton. Making Jeter the regular DH is a non-starter because of his weak offensive production and the problem of blocking the catchers. The Yankees must get younger, and Montero is a big part of that. Blocking him with Jeter or A-Rod is killing the future for the sake of the past.

Left field causes similar problems. The average major-league left fielder hit .270/.337/.432, and a few of them, like Brett Gardner and Carl Crawford, played Gold Glove defense. Many of them also hit with more authority and consistency than Jeter is likely capable of at this point in his career. Even a rebound to 2008 levels of production (.300/.363/.408) wouldn’t carry the position, especially not with good reason to expect a defensive fall-off.

In 1966, the producers of the "Batman" TV show made a movie to capitalize on the series’ popularity. It’s not a very good film, but it contains a terrific line. Batman is running around trying to dispose of a lit, cartoon-style bomb. Everywhere he goes there are spooning couples, nuns, ducks. Frustrated, he turns to the camera and says, "Some days, you just can’t get rid of a bomb." Well, some days, you just can’t get rid of a Jeter. If he has even a small rebound and his defense is consistent, he would continue to create more runs with his bat than he allows with his glove. If that’s not good enough for you, then you’re suggesting that Jeter isn’t good enough for the Yankees. Further, if you don’t believe he will be able to do even that in 2011 or beyond, you’re saying you don’t believe the Yankees should re-sign him, or should attempt to re-sign him on a year-to-year basis. Changing his position is nothing more than moving the problem he presents, and to pretend otherwise is ignorant or dishonest.