In Steve's eulogy for the Yankees' 2010 season in the wake of the team's Game Six loss to the Rangers in the ALCS on Friday, he included these words:

For me, the main dissatisfaction, the big mystery, is why and how the Yankees lost their stuff in September, when they went 13-17 and had to settle for the wild card, and why with the exception of the Division Series against the Twins they couldn’t get it back.

With Steve's permission, and at his bequest, I thought I'd take a stab at trying to solve that mystery this morning. 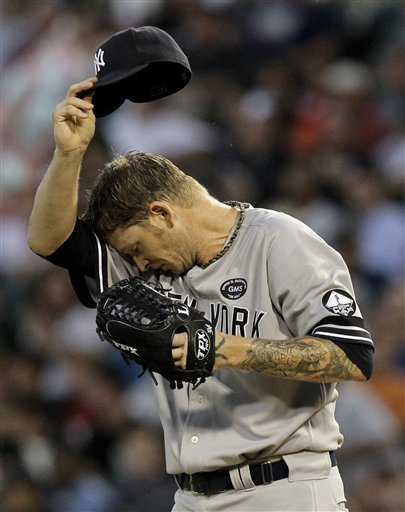 A.J. Burnett thinks he has figured out why the Yankees stunk down the stretch. (AP)

First, the facts. The Yankees opened September in the middle of an eight-game winning streak that pushed their season record to 86-50 (.632) and gave them a 2.5-game lead over the Rays in the American League East after the games of September 4. From the morning of September 5 through the end of the season, the Yankees went 9-17 (.346) blowing their lead in the division and finishing as the AL's Wild Card entry a game behind the Rays.

During those final 26 games, the Yankees scored 119 runs (4.58 per game) and allowed 140 (5.38 per game). That run differential alone translated to a .419 winning percentage, or an 11-15 record over those 26 contests (using the original, blunt-weapon Pythagorean formula).

Looking at that information alone, this looks like a total team collapse. The offense cooled off, plating nearly a run less per game than the 5.44 it had scored through the first 136 games. The pitching was giving up more than a run and a quarter more per game than the 4.07 it had been, and all together the team performed two-games worse than it should have even despite that poor performance on both sides of the ball.

Some criticized Joe Girardi for taking his foot off the gas down the stretch by resting his regulars, but given those performances, it's hard to see how Girardi was at fault. Gardner and Swisher missed time due to injury. Posada clearly needed the rest (not that it helped), and Francisco Cervelli actually hit .407/.575/.444 while making 12 starts over that stretch. Ramiro Peña and Eduardo Nuñez combined to make just eight starts during those final 26 games, and while neither hit, the men they spelled, Derek Jeter and Alex Rodriguez, did see their numbers perk up over that span (Jeter: .294/.381/.343; Rodriguez: .295/.375/.600), so Girardi should be credited for doing the right thing there.

Girardi didn't rest Teixeira, who surely could have used it, but doing so would have just resulted in more at-bats for Kearns, Thames, and maybe even Swisher. Besides, even without the rest, Teixeira seemed to come around in time for the Division Series, hitting .293/.388/.585 over the season's final ten games and .308/.357/.615 against the Twins in the ALDS. That he then went hitless in the ALCS against the Rangers before suffering a season-ending hamstring injury seemed more like a conventional slump against a good team than a continuation of his September struggles.

So, yes, the offense did cool off considerably over those last 26 games, but it had some legitimate reasons for doing so, and the net result was still an above-average attack.

The real problem was the pitching. While the offense managed to keep its head above average despite it's struggles down the stretch, the pitching staff's 5.38 runs per game allowed over the final 26 games would have ranked dead last in the majors over the full season, trumping the Pirates' 5.35 R/G allowed.

The Yankee pen posted a 4.12 ERA over those final 26 games. That would have ranked in the bottom third of the league over the full season, but the collective ERA of the seven men who made the postseason roster* over that span was just 3.29, which would have been the best mark in the AL over the full season (besting the Rays' pen's 3.33), and that's with Mariano Rivera giving up six runs in his final 9 1/3 regular season innings.

I think you can see where I'm going with this. The reason the Yankees went into a tailspin in September was the performance of their starting rotation.

Here are how the starting assignments broke down over those final 26 games:

That chart pretty much speaks for itself. Though Burnett admittedly had two non-disaster starts shortened by rain that could have turned into quality starts, getting a 5.71 ERA from your starting rotation and a quality start in barely more than a third of your games would be enough to make any team look like the Pittsburgh Pirates, whose major league-worst rotation posted an ERA over the entire season that, at 5.28, was nearly a half-run better than the Yankees' over those final 26 games.

Unlike the offense, which got solid contributions down the stretch from Robinson Cano, the rebuilt Curtis Granderson, the rejuvinated Jeter and Rodriguez, and on-base machine Lance Berkman, or the bullpen, which largely pitched well save for the struggles of Rivera, lefty Boone Logan (four runs in 6 2/3 IP), and the garbage-time relievers (6.41 ERA in 26 2/3 innings from the men who didn't make the postseason roster), the rotation was almost pure suck.

Sabathia, the ace, was no better than average, while everyone else was far worse. Vazquez was a disaster, and while his replacement, rookie Ivan Nova, showed some promise, and the Yankees performed well as a team in his starts, the net results of his starting assignments were far worse than the impression he left. Meanwhile, Hughes, in addition to his own struggles, ran up against his innings limit and was skipped twice, necessitating Moseley's two starts, both of which were disasters. Pettitte struggled upon his return from the groin injury that cost him the entire second half to that point, and A.J. Burnett was the bad A.J. as he had been for three of the preceding five months.

This wasn't really a secret at the time, but when Phil Hughes and Andy Pettitte turned in gems against the Twins in the division series, everyone quickly forgot about how much the rotation had struggled down the stretch. Yes, the Rangers held the Yankees to 3.17 runs per game (or 3.8 runs per game not started by Cliff Lee) in the ALCS, but the team also received just two quality starts in six games from its starting pitchers and did manage to out-hit one of the exceptions, rallying to win after Sabathia gave up five runs in four innings in Game One.

It's appropriate, then, that Steve phrased his inquiry the way he did, "why and how the Yankees lost their stuff," stuff being the key word. The Yankees late-season collapse was a team-wide phenomenon, but the reason they went from being the best team in the majors to one of the worst, rather than merely a middling mediocrity, was the brutal performance of their starting rotation.