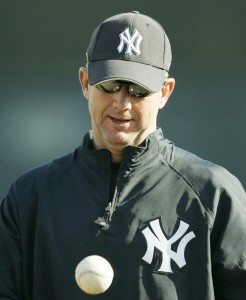 Dave Eiland: If Dave Righetti hadn't blown the save in his first start, maybe he'd still be the pitching coach. (AP)

Before getting to the headline item, the cashiering of Dave Eiland, let’s look at a something that Brian Cashman said in his Monday presser:

"We didn't look old against Minnesota, and that was a week before. Texas made us look old." (Tweeted by Mark Feinsand; I don’t have a transcript yet.)

The American League Division Series against the Twins was a three-game island in a sea of mediocrity. Adding the postseason to the record that Cliff discussed in his post earlier today, from September 5 on, the Yankees went 14-20 due to injuries and the freefalling starting rotation. Joe Girardi, in his own Monday press conference, said, "The way we played against Texas is similar to the way we played in the month of September." We also learned from Girardi that Phil Hughes got the Game 2 start in the ALCS because Andy Pettitte was having back and hamstring problems. Pettitte couldn’t even get through his Saturday bullpen session before the start. Girardi pushed him back because, "we were fearful… the last time Andy walked off a bullpen it became a couple of weeks."

What Girardi said about Pettitte, as much as the results against the Rangers, are what make the Yankees "look old." There’s a Hall of Fame pitcher named Ted Lyons. He spent his whole career with the White Sox, pitching for them until he was 45. As the years went on, the Sox limited him to about 22 starts a year, many of them on the occasion of scheduled Sunday doubleheaders. This resulted in some unusual lines for Lyons, like his 1942: he made 20 starts, completed all 20, pitched 180.1 innings, and led the AL in ERA. He wasn’t used that way so that the White Sox could amuse us with statistical oddities 68 years later, but because he couldn’t do more than that. If the Sox had asked him to make 30 starts, his arm might have torn off and gone pinwheeling into the stands.

Making adjustments like the one the White Sox made with Lyons, or the one that Girardi made with Pettitte is dealing with being old. Derek Jeter continuing his miserable season into the postseason is old. Alex Rodriguez’s arctic postseason and lack of defensive range is old. Never being able to use Mariano Rivera even when the situation seems to demand it, even when you want to, is old. Jorge Posada’s inability to throw? Old (he couldn’t block pitches in the dirt even when he was young). All of these players have their positives, and I’m not suggesting that they all have to be gotten rid of, an impossibility in any case due to contractual commitments, but that no matter the reason for the loss to the Rangers, the biggest issue facing the Yankees is that they are old. Period. By weighted average age of their batters, they had the fourth-oldest crew of hitters in the majors, trailing only the Phillies, Red Sox, and White Sox. By the same standard, the pitchers were the second-oldest at 30.4, younger older than only the Phillies.

The takeaway from this is twofold: (1) the Phillies are in trouble, and (2) whether the Yankees lost the ALCS because they were old or not, it is an inarguable truth that they are old. Denying this on the basis of three games against Minnesota, denying it at all, is to run away from reality.

As for Eiland, it's hard to comment on his departure not knowing the reasons for it. I can only suggest that there were a lot of problems this year that he couldn't solve, from A.J. Burnett's missing mechanics to Joba Chamberlain's inconsistency to Phil Hughes' mid-May and forward nosedive. In fairness to Eiland, we also don't know what he tried to do about these things and if any other pitching coach would have been more effective than he was at solving them.

Since Eiland's firing seems to have come for some non-baseball reason, you do have to feel sorry for the guy that some personal or private failing (a failing, at least, as far as Brian Cashman was concerned) cost him his job. I've always admired Eiland for getting all or parts of 10 seasons in the majors despite less-than-impressive stuff or results. He wasn't the kind of pitcher the Yankees were going to be patient with or support, and even when he did pitch well, such as in his seven-inning, three-hit major-league debut in 1988, he was snake bit: he left the game leading 4-1, but closer Dave Righetti (now the pitching coach for the World Series-bound Giants) gave up five runs in the eighth to blow the lead. Eiland wouldn't get his first Yankees win until June of the following year. Better luck next time around, Dave Eiland. As for the Yankees, let's hope that the first question on the interview exam is, "Do you speak whatever language A.J. Burnett uses?"