Though the Yankees Universe continues to mourn the team’s ALCS downfall, that doesn’t mean that Yankee baseball is over for the year. The Yankees have seven prospects still playing in Arizona, and four of them have the potential to be added to the 40-man roster this winter. The AFL is just heating up, so gather ‘round the stove and see how the youngsters are doing. 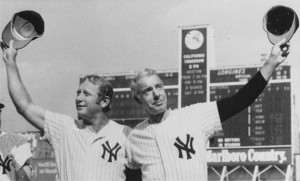 Will the Yankees find the next Mantle or DiMaggio in the Arizona Fall League? (AP)

Manny Banuelos, LHP: Two appearances: 8 IP 11 H 6 R 2 ER 2 BB 4 K—The majority of this unhappy line stems from Banuelos’ start against Scottsdale and the Mighty Bryce Harper (come all without, come all within). Harper had a base knock against the 19-year-old, while the rest of Scottsdale’s lineup had seven hits and scored five runs (two earned). Banuelos hasn’t quite gotten back into his strikeout groove, though yesterday’s three Ks are encouraging. This is a hitter’s league, so it’s not surprising to see pitchers getting battered about, and not all of the players are glove wizards (as evidenced by the four unearned runs); as is always true for the AFL, take a pitcher’s line with a dash of salt.

Craig Heyer, RHP: Two appearances: 5 IP 5 H 2 R 2 ER 1 BB 1 K—Heyer made an appearance as a starter and a reliever this week, giving up a run in each. He must be off his game, though—he gave up a walk this week(!), something he didn’t do in the regular season from Opening Day until July. Heyer’s performance in Arizona thus far exemplifies his game: he gives up about a hit per inning, he gets a couple of Ks, and happiest of all, he is death to worms and other ground-dwellers. That could certainly come in handy at the big-league level in a double-play situation, and it could well be Heyer’s selling point in grabbing a 40-man spot this winter.

George Kontos, RHP: Two appearances: 3 IP 6 H 3 R 1 ER 4 K—It has been a tale of night and day with Kontos—he’s good one day, awful the next. On his good days, he doesn’t give up many hits and strikes out a few batters. Actually, as far as the strikeout department is concerned, Kontos has been cruising at a higher clip than he has over his career rates, with nine Ks in 5 1/3 innings. Sure, it’s a small sample size, but it’s a positive. For a guy slightly more than a year removed from Tommy John surgery, Kontos has been showing surprisingly good control since his return. More concerning is the alternating days of more or less lights-out ball and its opposite (lights on-ball?). An Icy Hot sort of reliever isn’t going to make it far in the majors, but with Kontos being only a step away from the majors, the Yankees will be giving him a long look before deciding his fate.

Brandon Laird, OF: 6-for-22 3 2B 1 HR 6 RBI 3 K—Another week, another handful of extra-base hits for the Southern Californian. Now that he’s being tested at first base and in the outfield, Laird is going to have to mash like crazy if he is to be a regular in the big leagues (though that chance probably won’t come with the Yankees). More likely, Laird is going to be used as a utility player at the corners, none of which he will play with the grace of Mark Teixeira, but with luck he will be a bit more adept thanMarcus Thames. There only major complaint I would have with Laird’s performance in the AFL thus far would be the lack of walks. Since arriving in Scranton, any traces of patience at the dish have been forgotten; he only drew four walks in 122 ABs at Triple-A and has taken one free pass in 34 at-bats in Arizona.

Jose Pirela, SS: 0-for-16 5 K 1 SB—The line speaks for itself. Pirela hasn’t had a hit since his second game, but he has been keeping up with his swing-and-a-miss game. Despite getting in only seven games, he is already up to three errors, another red mark. It’s hard to say anything good about a guy when he is putting up a whole lotta nothin’.

Ryan Pope, RHP: Two appearances: 4 IP 5 H 2 R 2 ER 1 HR 4 K—It wasn’t an awful week for Pope—his second appearance, in which he gave up four hits and two runs marred his solid two innings of work earlier on—and the ground balls that he induced build more of a case for him sticking in the pen. The righty has kept himself par for the course in terms of getting a roster spot. He’s almost a year younger than Kontos, which could work in his favor, and both are former starters who worked in relief this season. However, Kontos has pitched at a higher level than Pope. It will be interesting to see how this shakes out, but I have a feeling that when it comes down to choosing, only one of Kontos and Pope will make the roster.

Austin Romine, C: 2-for-16 1 2B 4 RBI 1 BB 2 K—Romine’s second week in the desert was the opposite of his first week in terms of hit-worthiness. He didn’t get a hit in the last two games he played in, and he has only drawn one walk. The Yankees would doubtlessly love to see a bit more patience from their backstop, but a few more knocks would also suit them. It’s early, so no worries about a down week.