Put It in the Books

Share All sharing options for: Put It in the Books 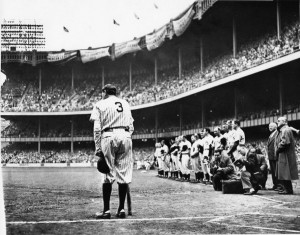 As John Lennon sang in, "God," the dream is over. The Yankees will not be defending their 2009 championship. The very existence of that win from a year ago makes this loss a bit easier to bear, particularly when the Yankees will yield to a young, hungry team that represents a franchise that was long led by such a malodorous bunch of incompetents that in nearly 50 years of existence it has never so much as sniffed a pennant until now. Earlier today, someone on Twitter asked for nominations for the greatest moment in Rangers history. Thanks to Joe Girardi, it’s probably an intentional walk. Or three. For me, three things came immediately to mind: Bob Short trashing Washington as a baseball town and abandoning it for Arlington; the same owner rushing high school kid David Clyde to the major leagues, likely destroying his career before it ever got a chance to begin; and Lenny Randle thrashing manager—that is, his own manager—Frank Lucchesi during spring training, 1977. There has just not been a lot to cheer in Rangers history.

For me, the main dissatisfaction, the big mystery, is why and how the Yankees lost their stuff in September, when they went 13-17 and had to settle for the wild card, and why with the exception of the Division Series against the Twins they couldn’t get it back. If you think about it, a lot went wrong this year in terms of injuries and disappointing seasons, and yet the ballclub was able to overcome them to win 95 games, not all of them against bad teams. Whatever qualities allowed them to do that disappeared with summer; even Robinson Cano went a bit cold in September. Some combination of age, injury, and fatigue did the Yankees in, and untangling just which of these was mainly at issue, and how transient the symptoms, will be the major task of the offseason. If age was at fault, the Yankees are going to have a hard time dealing with it due to self-imposed limitations like (we assume) re-signing Derek Jeter so that he can chase 3,000 hits at the expense of winning.

The season is over for the Yankees, but the Pinstriped Bible goes on. We will be here throughout the offseason, first to figure out what went right and what went wrong, and then to advocate for ways to sustain the former and fix the latter. I have long said that just as the Bible is an argument about how to live a moral life, the Pinstriped Bible is an argument about winning baseball. We will have plenty of opportunity to do so as the 2010 Yankees fade into the past, replaced by the nascent 2011 Yankees. I suspect that this is one of those winters, like the one that followed the 2004 ALCS loss to the Red Sox, when the Yankees’ famed financial advantage could do them more harm than good. You will recall that in the instance I mentioned, they signed Carl Pavano and Jaret Wright.

Every year at this time since I began this feature, regardless of when the Yankees’ season has ended, I have used this moment as an opportunity to thank you for reading. I have the best job in the world, writing for you. I want to thank you for each and every email, comment, and click. It is entirely my privilege to get the chance to inform and entertain you. In addition, I also want to thank my great friends and colleagues Jay Jaffe, Cliff Corcoran, and Stephani Bee for coming aboard in August and doing exemplary work, and I want to thank you for embracing them as well. The ol’ PB has been around for many years now, but I’m pleased to see it can still show off a new trick or two.

That’s a wrap on the Yankees’ postseason, but starting with our next entry, the battle for the next championship resumes. You know the questions: Is Derek Jeter past it? Does A-Rod have another big year in him? Brett Gardner or Carl Crawford? Cliff Lee or one of the kids? Can Mo do it again at 41? Can David Robertson bounce back from a hideous ALCS? Who is the catcher if not Jorge Posada? And who is the DH? Will Jesus Montero make the team? If so, at what position? Can and should Kerry Wood be re-signed? Should Joba Chamberlain be traded? Are the Yankees foolish to take Phil Hughes’ 18 wins at face value? Will Andy Pettitte come back? Should he? How will we get through a whole winter without seeing Sergio Mitre, Dustin Moseley, or Chad Gaudin chucking meatballs? Can Joe Girardi go on some kind of medication that will ease his Compulsive Intentional Walk Syndrome?

These and many more questions loom as the Yankees look to recover from a very one-sided postseason loss. In fact, let’s not call this a loss; let’s call it a cliffhanger.