The road to hell is paved with good intentions, as the old proverb goes. For the Yankees, the road to elimination from the 2010 postseason was paved with bad intentional walks. One can argue — as I did over at Baseball Prospectus — that the just-completed ALCS between the Rangers and Yankees turned on those walks. The Yankees issued eight of them in the six-game series, five to Josh Hamilton, by far the biggest bat in the Rangers' lineup. Two more went to David Murphy, and one went to Nelson Cruz. Four times those walks were immediately followed by run-scoring plays, blowing up in manager Joe Girardi's face like so many gadgets ordered by Wile E. Coyote out of the Acme Catalog of Bad Ideas. In all, the Rangers scored 14 runs — 37 percent of their total for the series, and just four less than the Yankees scored all series — in the seven innings where an intentional pass was issued.

Oh, those bases on balls! as the 1914 Miracle Braves manager George Stallings and my own late grandfather Bernard Jaffe were prone to say. 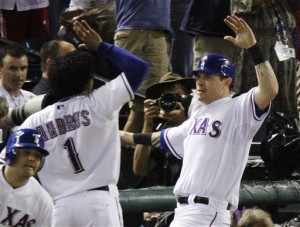 Intentionally walking Josh Hamilton and friends had dire consequences in the ALCS (AP).

Two of those walks were directly followed by the hits which put the Rangers ahead in the Yankees' final two losses of the season. In Game Four, A.J. Burnett's two-out pass to David Murphy was immediately followed by Bengie Molina's three-run homer, a blow which turned a 3-2 deficit into a 5-3 lead en route to the Rangers' third win of the series. In Game Six, Phil Hughes' two-out fifth-inning pass to Josh Hamilton was immediately followed by Vladimir Guerrero's two-run double, which turned a 1-1 tie into a 3-1 lead. That ended Hughes' night; facing David Robertson in the next at-bat, Nelson Cruz homered to extend the lead to 5-1.

The Rangers also scored a run immediately following Robertson's one-out pass of Murphy in the ninth inning of Game Three, via a Molina single which brought home the second run amid a six-run rally which put the game out of reach. They added another on Friday night when Kerry Wood intentionally walked both Hamilton and Cruz in the seventh inning, with the former scoring on a sacrifice fly by Ian Kinsler.

The big innings had plenty to do with the pitch execution by the pitchers who granted those passes, but plenty more to do with the fact that an intentional walk is a much-overrated gambit even under the best of circumstances. Certainly there are times where it's merited, such as to create the opportunity for a force out in a potential game-tying or game-winning situation. But its use can be hazardous to a team's health.

In a lengthy SI.com piece devoted to Game Four, Joe Posnanski cited a Hardball Times study which showed the math of the tradeoff between intentional walks and run scoring. Using 2005-2008 data and a run expectancy matrix, Hardball Times author Peter Jensen showed that such walks raised the expected scoring yield in those innings by about 23 percent. Teams actually wound up scoring far less than that — 11.5 percent more than initially expected, pre-walk — because those walks, many of which no doubt involved bringing the pitcher or another particularly weak hitter to the plate, did have some element of strategy behind them. Still, increasing scoring by 11.5 percent is roughly the equivalent of adding half a run for every game in which you issue one walk. When you issue four in one night, as Girardi ordered his pitchers to do in Game Six, you're just begging for the game to be broken open.

The intentional walks the Yankees issued were mainly to gain the platoon advantage. They tried to avoid having a right-hander pitch to Hamilton, who hit like the second coming of Ted Williams against righties this year (401/.447/.716), instead choosing to face cleanup hitter Vladimir Guerrero, who was very ordinary against righties (.287/.328/.482). Likewise, they chose to avoid having a righty pitch to Murphy (.298/.368/.479 against righties) and instead face Molina (.213/.252/.292 against righties). But even a blind chicken finds a kernel of corn now and again, and even a lesser hitter like Guerrero or Molina — whose splits should really be considered in the context of much larger sample sizes than a single season worth of data — can crush a poorly located pitch, particularly against the lesser versions of Burnett, Hughes and Robertson who donned the pinstripes in the postseason. When they did it with an extra runner on base, it cost the Yankees big time.

Those walks gave the Rangers ample assistance in completing one of the most severe postseason beatdowns the Yankees have ever suffered. They were outscored 38-19 — two to one! — and all four of their losses came by five runs or more. The only time the Yankees wound up outscored by more runs in a postseason series was in the 2001 World Series, where despite allowing 23 more runs than they surrendered, the outcome was in doubt until the final pitch.

In any event, as I've said numerous times in numerous venues over the past 18 hours, the Yankees are who we thought they were, a 95-win team with glaring weaknesses that the right team could exploit. The speedy, righty-heavy Rangers were that right team, running wild on the basepaths against the hapless Jorge Posada, and pounding both the lefties and the righties in a rotation which despite huge dollars and big promises was absolutely dreadful in the second half of the season. The obvious solution — sign Cliff Lee — is hardly an automatic matter given the Rangers' run to the World Series and the fact that unlike when they snatched him out from under the Yankees' noses in mid-July, they now have a new owner and an extremely lucrative TV contract.

In any event, decorum should dictate that such matters be tabled until Lee's done with the business of this World Series; the Hot Stove will be lighting up soon enough, so what's the rush? The Rangers earned their victory over the Yankees, and they and their fans deserve to savor it for every bit that it's worth while there's still baseball to play.