Share All sharing options for: Anatomy of an At-Bat: Vladimir Guerrero's two-run double

Joe Girardi played with fire by having Phil Hughes walk Josh Hamilton to face Texas' cleanup hitter, Vladimir Guerrero. While it worked in the third when Guerrero popped to second, Girardi and Hughes tempted fate again and it blew up in their faces. Unfortunately, it was the last batter Hughes faced in 2010, and it will leave a sour taste in his mouth until the spring.

1. Vlad Gurerrero is known for his impatience. He jumped on Hughes' second pitch and rocketed it toward left-centerfield. You should know just how impatient he is ('just how impatient is he?!'): He finished dead last in pitches-seen-per-plate appearance (3.13) among all qualified players (151).

So the sequence would, of course, be short: cutter (ball), curveball (double) - 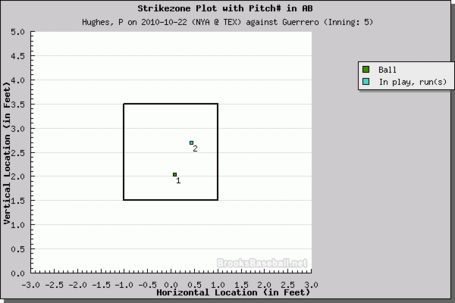 As you can see, pitch 2 was very hittable. Hughes' curveball was inconsistent all night, and he hung one to a great hitter.

3. In his second AB, Vlad swung over the top of a curveball, and that's probably why Hughes went to the hook behind 1-0. He probably should have gone to the fastball: He had retired Vlad on fastballs in each of his first two ABs.

4. The intentional walk to Hamilton was, in fact, justified. Hughes has generally not had any trouble with Vlad. In 10 PA before last night, he'd held him to a .400 OPS with two singles and two strikeouts. Against Hamilton, Hughes had walked him thrice in six PA with a double (and had conceded a single in his first inning AB). So while Hamilton may not have hit him particularly hard, he clearly felt comfortable and saw the bell well out of Hughes' hand.

- Frankly, I'm disappointed in Phil Hughes. The Yankees were counting on him and he racked up an 11.42 ERA in this series. In hindsight, Andy Pettitte should've been the no. 2 starter, but who knew Hughes, who had pitched so well against Texas previously, would fail to give even one quality start in two games? Did he tire as the season wound down? He threw 192 innings this year - his previous high had been 146 (all minor league) innings in 2006, and he hadn't tossed more than 110 since '07. So yeah, it's possible.