The Braves Do the Smart Thing With Melky

Share All sharing options for: The Braves Do the Smart Thing With Melky 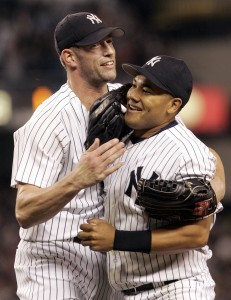 With the ALCS taking up all the available capacity of my frontal lobes, marking the release of Melky Cabrera has repeatedly slipped my mind, along with my car keys, my social security number, and the equation for calculating compound interest. Last week, the Braves relinquished their hold on the outfielder who was one-third of the pie they received in return for sending Javier Vazquez (thanks bunches) and Boone Logan to the Yankees. Even without Melky, the Braves should still make out in the long run, because they also received spot lefty Michael Dunn and teenaged pitching wunderkind Arodys Vizcaino (slowed by arm problems but still extremely viable). Yet, it is notable that they just sacked the sole established major leaguer they received in the deal.

The problem essentially boils down to money. Cabrera made $3.1 million this year and is eligible for arbitration, guaranteeing a further boost in pay. Cabrera just isn’t worth it. He hit .255/.317/.354, which (A) is bad, but not as bad as he can be—that was 2008, and (B) is entirely consistent with what he’s done before. The elevator in this building does not provide access to the top floor. Five years into his major-league career, Cabrera has confirmed that he possesses one positive: he can play all three outfield positions competently and with a strong arm, albeit without terrific range due to routes which connect through Bora Bora. If you followed the Yankees over the last few years, you know the negatives:

Cabrera’s days as a regular should now be over. His ability to play a passable center field qualifies him to be a fourth/fifth outfielder, but if a team actually has to play him for any sustained period of time risks losing a great deal of offensive production unless it is able to catch one of his rare hot streaks. When Cabrera first came up, he hit just well enough that one could think, "Hey, he hit .280/.360/.391 as a 21-year-old, so if you project just a little bit of growth from there, you could have a half-decent center fielder, not a star, but someone useable." It just hasn’t happened. Not only has he failed to develop, he’s gone backwards. In short, congratulations to the Braves: they figured out in one year what the Yankees required four years to confirm for themselves: this Melky has gone sour.

I’ve got some thoughts on speeding up the game over at Baseball Prospectus (sub req’d).