CC in the Bullpen: Big Deal?

Share All sharing options for: CC in the Bullpen: Big Deal?

CC Sabathia wasn't exactly artful in throwing 112 pitches against the Rangers in Game Five. In the immortal words of Rangers manager Ron Washington, "We had Sabathia bended. He didn't break," leading one to wonder if his team's failure to conjugate verbs correctly was more responsible for extending the series than the Yankee bats. In any event, with just one day of rest but his team's back still to the wall, Sabathia is making himself available out of the bullpen; the big man says he can throw 45 to 50 pitches if needed. 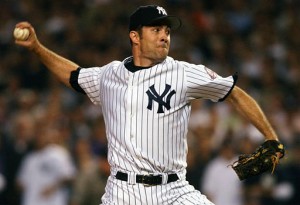 The Moose got loose in Game Seven of the 2003 ALCS, providing the best bullpen cameo of any Yankee starter during their post-strike run (AP).

That may or may not be a big deal. Ranger hitters have tattooed Sabathia at a .386/.438/.568 clip in this series, but they're also 2-for-4 with a double and a homer against Boone Logan, the only other lefty at manager Joe Girardi's disposal, since Andy Pettitte is being saved to start a potential Game Seven. Both of those hits against Logan came off the bat of Josh Hamilton, the most fearsome of the three lefties in the Ranger's lineup. Though he hit far better against righties than lefties in the regular season and over the course of his career, Hamilton also has homers against Sabathia and Pettitte in this series, so bringing in a lefty specifically to face a guy slugging .941 against southpaws in this postseason may rank as a futile bit of by-the-book managing.

Where things may matter a bit more is against lefty-swinging David Murphy, who's likely to bat seventh. The Murph hit .298/.368/.479 against righties this year, and he collected a double and a towering homer off Game Six starter Phil Hughes in Game Two. On the other hand, he hit just .272/.328/.368 with one homer in 125 PA against lefties this year, and that represented a considerable improvement on his 2008-2009 showing. Pressed into Wednesday's game by Nelson Cruz's hamstring tightness, Murphy collected a single off Sabathia, but that's hardly as convincing a deterrent as Hamilton's homers, particularly when one considers that the hit came when CC was up 6-1 but beginning to look for the finish line.

The other thing to consider is the weather. With a 40 percent chance of rain for Game Six and a 60 percent chance of rain for Game Seven, the possibility of a starter's night ending early because of a poorly-timed delay makes having Sabathia available for an inning or two a more important option. Hughes and Pettitte have both been handled particularly conservatively lately, and who knows how long such a delay would have to be before the Yankee brass decided not to risk their health under such circumstances. Not that Sabathia wouldn't be at some risk either, of course. But whether for one batter or one inning, CC — like Ice Cube on the Office Space soundtrack — is down for whatever.

In any event, the recent history of Yankee starters coming out of the bullpen is not a terribly auspicious one. Limiting the list to those who made a relief appearance as well as a postseason start in the same season leaves David Cone's 2000 World Series cameo on the cutting room floor, but it also avoids the Jeff Weaver 2003 nightmare, so in that context we have the following from the modern run of Yankee success. Be forewarned that this shines a light into some of the darker corners of the team's last decade and a half:

1. Jack McDowell, 1995 ALDS vs. Seattle
Though he led the staff with 15 wins, 217.2 innings and a 3.93 ERA that year, Black Jack had gotten knocked around in his Game Three start, yielding five runs in 5.1 innings, but he threw just 85 pitches. With a rookie named Mariano Rivera faltering in the bottom of the ninth inning of a tied Game Five, manager Buck Showalter called upon McDowell to extricate the Yankees from a two-on, one-out jam. McDowell whiffed Edgar Martinez and got Alex Rodriguez to ground into a fielder's choice, and he pitched a scoreless 10th as well. The Yankees scored a run in the top of the 11th against Randy Johnson, but McDowell couldn't hold the lead, surrendering three straight hits to Joey Cora, Ken Griffey Jr. and Martinez, the latter a double which brought home both the tying and the winning run — a blow credited with saving baseball in Seattle, but one marking the end of the Yankees' season.

2. Kenny Rogers, 1996 ALDS vs. Texas
Though he'd gone 12-8 with an ugly 4.68 ERA during the regular season, the Gambler had not yet earned his reputation as a postseason choke artist when he made a one-batter cameo in the top of the 12th inning in Game Two. With two outs and men on second and third, Rogers took the baton from Jeff Nelson, but he was immediately hooked after walking Will Clark on four pitches. Brian Boehringer then came on and retired Dean Palmer on a fly ball. Rogers would come back to start Game Four, but he got another quick hook after yielding five hits in two innings, the first of three ugly abbreviated starts he'd make which nonetheless failed to deter the Yankees from winning their first world championship in 18 years.

3. Orlando Hernandez, 2000 ALDS vs. Oakland
Hernandez emptied the tank by throwing 130 pitches in beating the A's in Game Three, working around five walks to hold them to just two runs over seven innings. His services were nonetheless required in Game Five; while the Yankees scored six runs in the top of the first thanks to some creative outfielding by Terrence Long, starter Andy Pettitte surrendered 10 hits and five runs before Joe Torre mercifully pulled him in the fourth inning. In what rates as a couple of the most important but underappreciated moves he made in any of his pinstriped postseasons, Torre used top setup men Mike Stanton and Jeff Nelson to get him through the seventh inning; the early-to-work duo retired 10 of the 11 hitters they faced. Hernandez came on to start the eighth inning, catching Ben Grieve looking at strike three but then surrendering a double to pinch-hitter Matt Stairs. Rivera took matters from there, getting the last five outs to send the Yankees onto the ALCS against Seattle.

4 and 5. Mike Mussina and David Wells, 2003 ALCS vs. Boston
Mussina had taken the loss in both Games One and Four, surrendering five homers and seven runs in just 12.1 combined innings over the course of the two starts. Wells, whose first start was bumped behind Mussina's second because of rain, was nonetheless in vintage form in Game Five, with a Manny Ramirez solo homer the sole blemish on seven-inning, 103-pitch effort. Both were needed in Game Seven, when Roger Clemens soiled the bedsheets by allowing four runs in three-plus innings. The Moose came on with men on second and third and nobody out in the fourth; he struck out Jason Varitek and induced a double play off the bat of Johnny Damon, then added two more scoreless innings. When he left, the Yankees still trailed 4-1, and while they added a run via Jason Giambi's solo homer off Pedro Martinez in the bottom of the seventh, Wells gave it right back in the eighth by surrendering a first-pitch longball to David Ortiz before getting two quick outs to end the inning. The Yankees would ultimately tie the score against a flagging Martinez in the bottom of the eighth, of course, and win it on Aaron Boone's walkoff homer in the 11th.

6. Javier Vazquez, 2004 ALCS vs. Boston
You can be forgiven for skipping this one... Vazquez didn't exactly sparkle in his lone ALDS start against the Twins, yielding five runs in five innings, so he was sent to the bullpen while El Duque joined the rotation. Hapless Javy was credited with the win in their 19-8 Game Three rout, coming on after Kevin Brown was KO'd after allowing four runs in just two innings, though he yielded four runs and seven hits in 4.1 butt-ugly innings of long relief work. The win left the Yankees one short of returning to the World Series, but they never got there, losing the next three games to force a Game Seven in which Brown, who had turned his non-pitching hand into a maraca late in the year, was given another chance. You know the rest; Brown was chased midway through the second inning with the bases loaded, Vazquez surrendered a first-pitch grand slam to Johnny Damon and was taken deep again by Damon in the fourth as the Red Sox became the first team to overcome a 3-0 series deficit. Blech.

7. Randy Johnson, 2005 ALDS vs. Anaheim
While hardly Cy Young caliber, the Big Unit's first season in pinstripes wasn't awful, as he'd gone 17-8 with a 3.79 ERA and 211 strikeouts in 225.2 innings. His postseason was a different story. He left his Game Three start after surrendering nine hits and five runs in just three innings, the shortest postseason start of his career, but came back in Game Five three days later when Mussina was chased after allowing five runs in just 2.2 innings thanks in large part to the second inning outfield collision between Gary Sheffield and Bubba Crosby which plated two runs. Johnson came on in the third to get the Yankees out of a two-on, two-out jam, and he pitched four more scoreless innings in an attempt to atone for his sins. Alas, it was too little, too late as the Yankee bats went virtually silent; they were eliminated in a 5-3 loss.

Adding it all up, you've got a spotty legacy of such cameos. The above starters yielded a 5.51 ERA in 16.1 innings of work, surrendering four homers and putting up a 14/9 strikeout-to-walk ratio, which isn't much to write home about. Six of the eight appearances came in elimination games; the Yankees were just 2-3 in those games, and aside from Mussina's sterling 2003 effort, those efforts were either bad or of not much consequence. Then again, one can arguably exclude Vazquez's bleak performances on the grounds that he'd already been bumped from the rotation, which pretties up the stat line (2.70 ERA, 1 HR, 8/2 K/BB) considerably, and remember that when your season's on the line, it's probably better to put the ball in the hands of a subpar Sabathia than a daisy-fresh Sergio Mitre.