Can the Big Puma Pick Up the Slack?

Share All sharing options for: Can the Big Puma Pick Up the Slack? 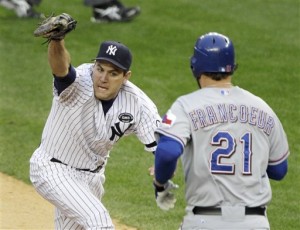 Lance Berkman is suddenly a key to the Yankees extending their season (AP).

With Mark Teixeira out for the rest of the postseason due to the Grade 2 hamstring strain he suffered in Game Four — a bad break even given that he was 0-for-14 in the series — Lance Berkman is suddenly a much more central figure to the Yankees' chances of repeating as world champions, or at least surviving to fight another day. The 34-year-old switch hitter's acquisition from the Astros seemed like a relatively minor bit of roster-gilding back at the July trading deadline, particularly given that he was in the midst of a career-worst season. After two and a half months of part-time play, he finds himself back in the role of lineup staple.

Once upon a time, Berkman ranked among the best hitters in the National League, a possessor of ideal amounts of power and patience that made him a perennial mid-lineup threat. From 2000 through 2009, he bopped 309 home runs for the Astros — the ninth-highest total during that stretch — while hitting .300/.413/.559 and making five All-Star appearances. He scored 100 or more runs five times, drove in 100 or more six times, and ranked in the NL's top 10 in on-base percentage nine times during that 10 year stretch, adding four such leaderboard appearances in both batting average and slugging percentage. He was fairly durable too, averaging 147 games a year during that span, with a knee surgery (left) that cost him the first five weeks of the 2005 season his only major absence.

Alas, that left knee has become something of the bane of Berkman's existence. Back in March, he underwent surgery to remove loose cartilage in the knee, and Baseball Prospectus injury expert Will Carroll reported a pattern of symptoms consistent with arthritic changes in the joint — bad news for a guy in the final guaranteed year of his contract, if nothing else. Berkman began the season on the disabled list, didn't play until April 20, and hit just .175/.288/.333 over the course of his first 30 games. His bat gradually came around, but he still showed considerably less power than before, and his performance against lefties cratered.

With the Astros facing a long-overdue need to rebuild, they finally unloaded Berkman and Roy Oswalt, their two biggest stars, around the trading deadline. Oswalt joined Roy Halladay and Cole Hamels to form one of the game's most formidable rotation fronts; not for nothing are the Phillies still playing ball this postseason. Berkman became a platoon DH in pinstripes, getting just 20 plate appearances against lefties and hitting a fairly slaptacular .284/.388/.386 against righties. His bat showed a bit more life in September after he returned from missing the second half of August due to an ankle sprain, but he collected just one home run during his regular season stint with the Yanks, and started just 29 of their 59 games after being acquired.

Berkman began the postseason as a platoon DH, paired with lefty-mashing Marcus Thames. The tandem paid off in the Division Series against the Twins, with both players homering once; Berkman was the offense's big star in Game Two, adding a go-ahead RBI double to his solo homer. He collected hits in his first two LCS starts — against righties Colby Lewis and Tommy Hunter — including an RBI single in Game Two, though he was immediately thrown out after taking too wide a turn past first base.

When Teixeira went down in Game Four, Berkman was already at DH; he'd hit an apparent homer down the right field line in the second inning, but upon reviewing the call, the umpires ruled his drive foul. Since moving him to the field would have forced Joe Girardi to bat the pitcher in the number three spot, the manager instead moved Nick Swisher from right field to first base and put Thames in right, still a less-than-optimal move given the latter's shaky glove and the open invitation to call upon righty reliever Darren O'Day to face Thames and Alex Rodriguez back-to-back later on in the game. A better answer would have involved the use of Austin Kearns, but frankly, we're not even sure if he's still with the team, given that he hasn't been seen during a game since October 2.

Girardi made another suboptimal choice in starting Berkman against lefty C.J. Wilson in Game Five, though he made a surprisingly strong showing for a guy who officially went 0-for-2. He walked on four pitches in the second inning as Wilson's command began deserting him, coming around to score from second base on Curtis Granderson's single and the ensuing Little League-like mayhem. He also hit a bases-loaded sacrifice fly in the sixth, and battled through a total of 14 pitches in his two other at-bats, both outs. His day in the field was a bit rockier; most notably he slipped on the warning track and fell flat on his back while chasing a foul ball off the bat of Ian Kinsler in the fourth. At first it appeared he might have hit his head on the hard surface and possibly totaled himself for the series as well. Berkman did snap his neck and get the wind knocked out of him; he needed smelling salts in the dugout after the half inning. His fall apparently owed his wearing plastic spikes instead of metal ones, but he remedied that as well once he returned to action.

Though understandably sore, Berkman's apparently good to go against Lewis for Game Six, and the word is he'll start at first base (update: and bat fifth between A-Rod and Swisher). As awkward as he's looked in the field while in pinstripes, Berkman's 2010 numbers suggest he's been a couple runs to either side of average depending upon which system you use, and the same goes for last year's numbers. That still leaves Girardi scrambling to find a DH, with Thames and Kearns the likely options. Thames has been considerably less successful against righties over the course of his career (.236/.296/.480 compared to .264/.333/.505 against lefties), though he did hit . 268/.347/.549 against northpaws in 2010 given a small sample of just 95 PA. The righty-swinging Kearns has been less effective against righties over the course of his career, but not by as much (.255/.341/.426, compared to .261/.383/.416 against lefties); in 2010, his performance against the two sides wound up virtually identical thanks to a BABIP spike against righties; he showed more power and patience against lefties.

If the Yankees live to fight another day, the looming question is what to do about Berkman in Game Seven, as southpaw Cliff Lee is a different beast than C.J. Wilson, with far better command of the strike zone. Swisher (255 career games at first base, including 26 with the Yankees in 2009-2010), Thames (44 games at first with Detroit from 2007-2009) and Jorge Posada (28 games at first during his career, but just six innings there since 2008) are the only players on the current roster with big league experience at first base and all of them are likely to be in the lineup already, effectively narrowing the choice to Kearns (in right field, with Swisher the likely first baseman) and Berkman. Given how buried on the bench the former has become, it's likely the latter will be in the lineup not only for the rest of the series, but for the rest of whatever season remains.

The Yankees should be so lucky to face that choice. They've got to win tonight before considering what's literally a problem for another day.

Elsewhere
I've got a fresh ALCS notebook up at Baseball Prospectus, with a shorter take on Berkman as well as some stuff on CC Sabathia, the Yankees' and Rangers' platoon splits thus far in the series, and an assortment of other facts and figures.

I'd also like to call attention to a particularly plug-worthy bit of analysis by Larry Koestler over at the Yankeeist website. As Larry notes, the Rangers have been particularly tenacious while hitting in two-strike counts during this series, hitting a well-above-average .251/.298/.392 in such situations. In no game did they have more success with two strikes than against Phil Hughes in Game Two, a rather unsettling point given that the Yankees' season effectively rides on a much stronger start from the 24-year-old righty.