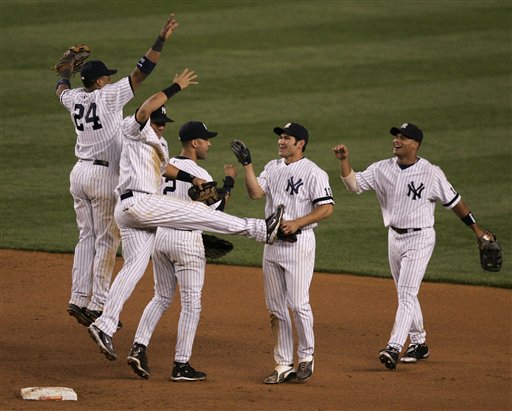 The Yankees felt good after Game Three of the 2007 ALDS, too, but their season ended the next day. (AP)

I must admit, I was unmoved by the Yankees' victory Wednesday evening in Game Five of the ALCS. Perhaps its because, even if they do come back to tie this series, they'll still have to beat Cliff Lee in Game Seven to win it. Perhaps its because, after being dominated by the Rangers for four games, a single win, even a lop-sided one such as the 7-2 Game Five, doesn't carry enough weight to restore balance to the series. Whatever it is, Game Five felt like a repeat of Game Three of the 2007 Division Series against the Indians, a face-saving but empty victory that did little other than postpone the inevitable series loss suffered in the following game.

Not that there weren't encouraging signs. The Yankees did to C.J. Wilson what I had expected them to do in Game One: work deep counts, draw walks, push some runs across, and bounce him mid-game. Curtis Granderson had a big game (3-for-4 with a double and a solo homer, the double and the single coming against left-handed pitching). Jorge Posada had a pair of hits including a double. Everyone in the starting lineup reached base save for, ironically, Brett Gardner, with six different batters getting hits and five different batters drawing walks. That's encouraging, particularly given that the post-Mark Teixeira lineup matches up better against right-handed pitching due to the permanent presence of Lance Berkman, who took an awful spill in foul territory but seemed to avoid meaningful injury.

The bullpen held the Rangers scoreless on a pair of singles over the final three innings. Granted only Kerry Wood (two innings) and Mariano Rivera pitched, but at least we know that Rivera is no longer locked in the bullpen bathroom, which I assume is why he didn't appear in either of the previous two games.

Less encouraging was the fact that CC Sabathia, despite battling through six innings and allowing just two runs, wasn't sharp for the third time in three postseason starts. Yes, Sabathia struck out seven men against no walks in six innings, but he also gave up 11 hits and was done after throwing 112 pitches in those six frames. CC hasn't made it to the seventh inning yet this postseason and has given up a home run in each of his starts, doing so to Matt Treanor of all people on Wednesday. Yes, the Yankees have won all three of his starts, but they've done so more despite him than because of him.

That's particularly discouraging given that, if the Yankees do pull off an unlikely comeback in this series and win the pennant, their World Series opponent will be able to counter Sabathia with a dominant ace pitching at the top of his game, be it Roy Halladay or Tim Lincecum, who rematch tonight in San Francisco with the National League pennant on the line. At this point, the Yankees would be better off sending Andy Pettitte to the mound against Halladay or Lincecum.

Ah, but that's getting way ahead of the matter. First, they have to win in Texas behind Phil Hughes, who gave up seven runs in four innings there in Game Two, simply to have a chance to face Lee in Game Seven. I'm finding it difficult to be optimistic about their chances.