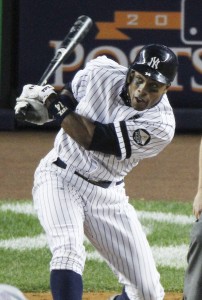 Curtis Granderson homers in Game 5 of the ALCS: Paying back the investment. (AP)

For three-fourths of the season, there was much second-guessing of Brian Cashman about the acquisition of Curtis Granderson, a deal which cost the Yankees Phil Coke, Austin Jackson, and Ian Kennedy. Cashman did indeed pay a high price. Coke is a solid left-handed middle reliever who impressed the Tigers enough this year to get a shot at starting in 2011. Ian Kennedy is a very solid back of rotation starter, a guy whose fastball will never intimidate (he sat around 89 this year), but has a good idea of how to use his off-speed stuff to set up hitters. Should his command evolve just a bit he’s going to be very good. Jackson had a strange year, leading the American League in strikeouts but hitting .300 until a September slump knocked him down to .293 and playing solid defense. The .239/.306/.415 rates that Granderson carried into mid-August, plus his stint on the disabled list, plus his absolutely futile numbers against left-handed pitchers didn’t give the Tigers vet much of a counterargument when compared to the three youngsters the Yankees had paid for him.

Then came the famous Kevin Long tinkering in Texas. Granderson went 2-for-3 in his first start after the lab-work and just kept hitting, batting .261/.356/.564 with 14 home runs in his remaining 192 plate appearances. As importantly, he was no longer helpless against same-side pitching, batting .286/.375/.500 against southpaws.

The Yankees have kept playing, and Granderson has kept hitting in the eight postseason games he’s played, piling up 10 hits between the two rounds. Add in his playoff performance, and Granderson’s post-intervention rates rise to .277/.376/.576. That represents production comparable to anything Granderson did in his 2007-2008 prime.

Given that Granderson had long since established himself as a talented major leaguer, given that this change seems to represent a truly new approach and isn’t the result of a fleeting stretch of good luck, the Yankees would be correct to expect more of the same from Granderson next year. So here’s the question: Coke seems like a decent middle-reliever/swing man, but that kind of pitcher is plentiful enough, especially given the Yankees’ deep pitching resources. Kennedy is a solid pitcher, albeit one without ace potential, but again, the Yankees were dealing from depth there. Jackson lacks power and selectivity, and given that, if his batting average dips below .290, he’s not going to have much offensive value. That said, for purposes of this discussion, let’s take his 2010 performance at face value. Granderson is a power-hitting outfielder who can play a solid center field, one of the rarest creatures on Earth. Knowing all of the foregoing, do you now consider one Granderson to have been worth those three players?

I do, but then, I always did. I felt that Granderson was a platoon player, but I felt that 120 games of Granderson against right-handers would be worthwhile. Now, you can’t ever make that argument against him.

The transcript of yesterday’s BP chat.