Share All sharing options for: Anatomy of an At-Bat: Curtis Granderson's (2) RBI single

The turnaround Curtis Granderson has made against left-handed pitchers since mid-August is remarkable.

It showed again yesterday as he accounted for the pivotal hit of the game. With runners on first and second with one out, Grandy lined a single toward right-centerfield that plated a run and caused right-fielder Jeff Francoeur to overthrow thirdbase. C.J. Wilson fielded the ball and had an easy chance to gun down Jorge Posada at home, only he too overthrow the catcher, allowing a second run to score. The score went from 1-0 to 3-0 and the Yankees never looked back. 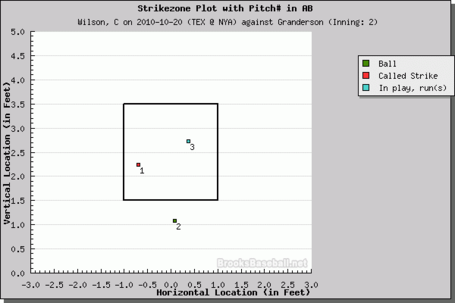 The first two pitches were exactly where Wilson wanted them: on the outside corner and down, out of the zone. The third pitch was really not that bad (maybe a little up), but Wilson was aiming for the inside corner, perhaps trying to induce a jam-shot and GIDP.

3. It's not just that he's hitting the ball better against lefties, but he's also having better 'takes.' He's not flailing at pitcher's pitches - he's making them work, and Pitch 2 of the sequence was a great example of this. Wilson threw a fine curveball trying to entice Grandy to swing over it - he did not and Wilson went back to a fastball, a pitch Granderson handles better.

4. Grandy had only faced Wilson seven times before the ALCS, with zero success to speak of: no hits, no walks and three strikeouts. But in this series, he's gone 2-4 with a walk and no strikeouts. How much credit belongs to Kevin Long is tough to say, but I don't think it's just chance that Granderson's resurgence coincided with his re-tooled swing. (He later doubled off a left-handed reliever.)

5. The AB was preceded by two four-pitch walks (to A-Rod and Berkman) and a run off a single, so Grandy knew Wilson wouldn't want to nibble, especially with the top of the order around the bend.