Notes on a Beatdown

Share All sharing options for: Notes on a Beatdown 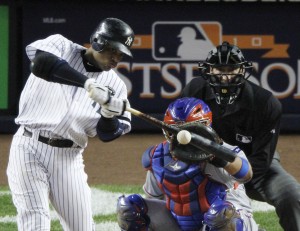 Some disconcerting statistics through the first four games of the American League Championship Series, where the Rangers have thoroughly outplayed the Yankees in taking a 3-1 lead:

• Through the first four games, the Yankees have been outscored 30-11. That imbalance comes out to a Pythagorean winning percentage of .119, meaning that at that rate, they'd be lucky to win one game out of eight, let alone one out of four, or heaven forbid four out of seven.

• The Yankees have held the lead for all of two and a half innings out of 36 played.

• Cano has all three of the Yankees' homers in this series, but just four RBI to show for those and his four other hits.

• That's because their number two through four hitters, Swisher/Curtis Granderson, Mark Teixeira and Alex Rodriguez are a combined 3-for-42 with seven walks. All of those hits are singles.

• At 0-for-14, Teixeira's 2010 ALCS will remain forever hitless, since the hamstring strain which forced him from Game Four was so severe that the Yankees replaced him on the roster, rendering him ineligible for further postseason play.

• Texas is hitting a combined .307/.390/.536. They've gotten an extra-base hit from players at every position except first base.

• The Rangers have seven stolen bases in eight attempts in this series, with Ian Kinsler's pickoff in Game One the only time they've been caught. The Yankees are 1-for-1 via Brett Gardner.

• The Yankee pitching staff has a 7.71 ERA in this series. The starters are at 8.14, accompanied by a pedestrian 15/10 K/BB ratio. Their bullpen has a 7.07 ERA while allowing three out of five inherited runners to score.

• Dustin Moseley, Kerry Wood and Mariano Rivera are the only pitchers not to be scored upon, and they've thrown all of five innings in this series. The rest of the bunch has allowed 30 runs in 30 innings.

• After screwing up by playing the offensively and defensively inferior Francisco Cervelli — who did a bang-up job handling that pitching staff and particularly A.J. Burnett, right? — ahead of Jorge Posada in Game Four and making numerous other tactical errors (putting Marcus Thames in the field, ignoring Austin Kearns, intentionally walking David Murphy, and so forth), manager Joe Girardi is starting Lance Berkman (.171/.261/.256 vs. lefties in 2010) in place of Teixeira at first base to face lefty C.J. Wilson.

• As Lucy Van Pelt once told Charlie Brown, "Tell your statistics to shut up!"

• As I said in writing up my Game Four experience from high up in Section 431A for Baseball Prospectus, it's not the end of the Yankees' season, but you can see it from here.