Coming Back the Casey Way

Share All sharing options for: Coming Back the Casey Way 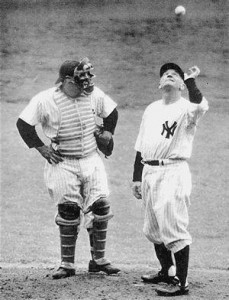 Casey Stengel and Yogi Berra: Casey's quick turn to the pen helped save the Yankees from a 3-1 World Series deficit in 1958.

In the 1958 World Series against the Braves, the Yankees quickly got backed up against a wall. Having dropped the 1957 Series to the Braves in seven games, in large part because they were absolutely helpless in three games against Lew Burdette (he allowed two runs in 27 innings), they entered Game 5 of the rematch down three games to one, having dropped two decisions to future Hall of Famer Warren Spahn and losing yet another contest to crafty ex-Yankee Burdette.

The ’58 Yankees were a bit like the 2010 version in that the starting rotation was a bit short. Bullet Bob Turley won 21 games, earning the first-ever Cy Young award to go to an American League pitcher. Whitey Ford posted a pristine 2.01 ERA. He and Turley were the only pitchers to make even 20 starts or pitch 200 innings. The rest of it was mixing and matching around injuries and shaky performances—the third-most valuable pitcher was closer Ryne Duren.

Backed into a corner, manager Casey Stengel started Turley on three-days’ rest in Game 5. Turley rewarded the assignment by pitching a five-hit, three-walk, shutout, whiffing 10 Braves. The offense finally broke through against Burdette, knocking him out of the game with a six-run sixth. Turley had earlier been blown out of Game 2, lasting just a third of an inning. In that games, he allowed a leadoff home run to Bill Bruton, a double to Red Schoendienst, a walk to Hank Aaron, and an RBI single to Wes Covington. At that point, Casey said, "Enough" and went to the pen. Unfortunately, his first choice, Duke Maas, made things worse, allowing two hits and a walk of his own, including a three-run homer to Burdette. The Yankees were down 7-1 after one, and the game was essentially over.

Yet, Casey’s quick hook with Turley, his big winner that year, would pay off later, because the manager just kept pulling his pitchers quickly. As I wrote in my last post, Joe Girardi erred last night in pushing A.J. Burnett, because the penalties for being wrong are too great. If he pitches out of trouble, you got lucky. If he doesn’t, you go home.

Turley gave the Yankees a second life, but they were still down 3-2 in Game 6. Stengel gambled again, starting Ford on just two days’ rest. That would never happen today we’re more aware of the risk of injury, but it seems likely that Stengel’s plan was to get just enough from Ford to build a lead, then turn the game over to the pen. Hank Bauer homered in the top of the first, but Ford gave the run right back in the bottom of the frame. When Ford allowed three straight hits and a walk with one out in the bottom of the second, Stengel, thinking fast, decided that this whole start Ford on short rest thing was a bad idea and yanked him from the game. This time the bullpen did its job, including Duren, who entered the game in the sixth and pitched 4.2 innings of one-run ball, striking out eight (the days of closers doing this are gone also, died with Goose Gossage). The offense rallied against Whitey Ford, and the Yankees won the game in 10. Stengel asked Turley to get the last out in the bottom of the tenth, and he retired Frank Torre for the save.

The Game 7 start went to Don Larsen, who had pitched seven shutout innings in Game 3 for the Yankees’ only win in the first four games. Stengel, now in Coffee Joe mode but justified, wasn’t going to let the team get into an early hole with the championship on the line. Larsen allowed a run in the bottom of the first, but the Yankees came up with two tallies in the top of the second to go up 2-1. Larsen retired the Braves in order in the second, but in the bottom of the third, Larsen allowed two singles with one out and Stengel couldn’t wait any longer. He summoned Turley for the third straight day. Turley pitched out of trouble, and though he allowed the Braves to tie the game in the bottom of the sixth on Del Crandall’s home run, that’s as far as things went. The Yankees scored four runs in the top of the eighth on an Elston Howard RBI single and a three-run home run by Bill Skowron, and Turley pitched in and out of trouble in the last two frames for the win and the championship, Stengel’s last.

Casey did some things that Joe Girardi can’t do. He can’t/won’t ask CC Sabathia to pitch in every game, he can’t ask Mariano Rivera to throw four innings—hell, it seems like he can’t ask Rivera to throw at all—but Joe also has some things that Casey didn’t have, like a bullpen stocked with pitchers, some of whom aren’t Sergio Mitre or Dustin Moseley. He has far more freedom to make moves with pitchers than Stengel had, and at much less of a risk to anyone’s health. In short, if there is any lesson to be taken away from the 1958 World Series, it is this: HEY, JOE: QUICK HOOK.