Share All sharing options for: ALCS Game 4:Joe Girardi Gets His Four Feathers 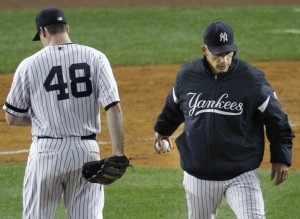 "Well, he was still throwing the ball good," isn't much more of a rationale for not taking the ball from A.J. Burnett than "It seemed like a good idea at the time." (AP)

Coffee Joe has finally reared his ugly head. Up 3-2 in the sixth, Girardi found the spot where he could put his imprint on the game. Instead of merely being satisfied from getting a serviceable five innings from A.J. Burnett after (A) the guy put up a 6.61 ERA in August-September and (B) not using him for more than a fortnight, he was going to simultaneously steer Burnett through danger and rebuild his confidence by getting him through the sixth, maybe the seventh, and mightn’t we dream… the eighth? In this way he would give the Yankees that all-important fourth starter for the World Series round.

First, Coffee Joe looked at his copy of Fun and Interesting Stats (That Impress Chicks at Parties!) and discovered that David Murphy has career rates of .294/.455/.471 with a home run against Burnett. Important discovery, right? Not really. A little knowledge can be a dangerous thing, and Murphy’s "dominance" covers just 22 plate appearances—he’s gone 5-for-17, which (A) means nothing, and (B) even if true, you still have a better than 50 percent chance of getting the guy out.

For those keeping score at home, that’s two (A) and (B) set-ups in two paragraphs. I fear we may have a lot more of them before this series is out.

As to the intentional walk itself, Bill James tracks the results of issuing them in his annual book. He separates them into three different results: "good" outcomes, in which no runs score after the IBB; "No Good," in which one run scores; and "Bomb" in which multiple runs score. In 2009, there were 453 intentional walks issued in the American League. I’m restricting this to the AL because I don’t know how many passes in the NL were issued to get to the pitcher. No doubt some of the AL IBBs were issued in interleague play, but not the majority, and I’d rather concentrate on what happens when a manager elects to pass one real hitter for another. Of the 453, 202, or 45 percent, had "good" results, and 251, or 55 percent, resulted in one or more runs scoring (100 were "bombs"). If we factored out the occasions when the pitcher was coming up next and was not pinch-hit for, undoubtedly the percentages would be even worse.

I’m sure you could point out reasonable exceptions, but the fact is that what the intentional walk does is it takes a hitter who might really have a 33 percent chance or a 40 percent chance, or even a 50 percent chance of reaching base and give him a 100 percent chance of reaching base. That seems like a bad tradeoff, whether to get the platoon advantage or just because you don’t like the guy coming up. The example I gave above overstates the risk of the IBB because sometimes a run or more would score whether the manager issued the IBB or not. In truth, whether the IBB works is more of a 50-50 proposition, a coin flip. You could do it, you could not do it, because sometimes even the best hitters make outs. The problem is, it’s a coin flip with a big penalty attached to it, because if it doesn’t work out, your chances of giving up multiple runs are worse than they were before.

I want to emphasize that I’m not second-guessing this because Bengie Molina hit a three-run home run. I think the intentional walk is always a bad idea. If you don’t trust your pitcher to handle the batter at the plate, get another pitcher. That is also something Girardi failed to do. Having gotten something of a miraculous start from Burnett, then having put him in a more dangerous spot than he would have been otherwise, he left him in to face Bengie Molina. Now, Molina was never a great hitter, and he has little left now, but let’s review the situation: Burnett hadn’t pitched well in forever, was over 80 pitches, and Molina hasn’t been hitting like a man verging on retirement in the postseason. I realize Girardi doesn’t have a lot of reason to trust his relievers right now, but he had even less reason to trust Burnett beyond, "Well, he was still throwing the ball good," which was his postgame explanation. Yes, Joe, but all good things must come to an end—perhaps even your pursuit of a pennant—the question is when. Better to be a little premature on that decision than too late.

After that , it was all, pardon the pun, intentional anticlimax, with Boone Logan, Joba Chamberlain, and Sergio Mitre performing tonight’s version of "Anybody But Mariano." I remarked at the outset of the postseason how odd it was that the Yankees took two pitchers, Dustin Moseley and Sergio Mitre, who would pitch only in blowouts. I was reminded of the German navy at the Battle of Jutland—they escaped the British in large part because they had practiced and perfected elaborate retreat maneuvers. Normally, you might put the emphasis on winning, but they were set to put the best face on losing. Bringing both Mitre and Moseley into the same postseason series is a lot like that. There are no trash-time innings in postseason baseball. If you’re ahead, you use your best relievers to stay ahead. If you’re behind, you are, at least theoretically, going to make every effort to keep the game close. There are very few games where you’re up by so much that you can say, "Heck, we’ll play the ‘prevent’ defense," or where you’re so far behind that you can outright give up, because the opposition is too good and the consequences of losing too extreme: you might have to take your $200 million payroll and go home without a ring. Instead, Girardi is essentially conceding games, saving Rivera for specific situations that might never come, with the result that his worst pitchers are putting the games out of reach. Tonight’s game was so far gone at 7-3 through eight that using Rivera wouldn’t have mattered much (I don’t expect any manager to have the imagination to use his closer before the eighth or ninth inning, and in any case, now isn’t the time for Girardi to start trying to teach his old dog new tricks), but Monday’s two-run deficit was a different matter.

You can apparently put Rivera in a box with the words, "BREAK GLASS IN CASE OF NEVER" on the front. That same legend may soon also apply to the Yankees’ championship hopes.