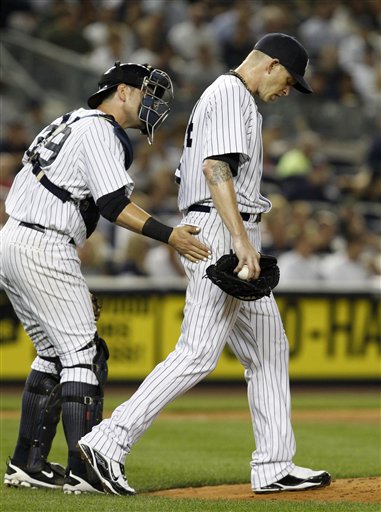 So, A.J. Burnett is starting for the Yankees in Game Four tonight. As if that weren't enough to spoil the already rapidly souring mood of Yankee fans, now we have to face the possibility of Francisco Cervelli also starting the game as Burnett's personal crutch, er, catcher. The lineups will be announced in a few hours, and I'm sure Joe Girardi has already made his decision, but here's a quick look at the implications of a Cervelli start anyway.

First thing's first, here are A.J. Burnett's splits with Cervelli and Posada behind the plate:

Catcher ERA is something of a statistical illusion. In Baseball Between the Numbers, Keith Woolner essentially debunked the idea that one catcher can have a meaningful impact on the effectiveness of a pitcher relative to another catcher. That said, the line on Burnett's resistance to pitching to Jorge Posada is that he doesn't have the necessary confidence in Posada's pitch-blocking abilities to break off his best curveball with runners on base, and as a two-pitch pitcher, he needs to be able to throw his curve with conviction to be effective. Not that he's had his best curveball very often this year, but that's the story. Here, then are the passed ball and wild pitch numbers for Posada and Cervelli this year:

I leave it to you to decide if Cervelli's higher rate of wild pitches is a result of catching Burnett (whose curves in the dirt would likely be ruled wild pitches rather than passed balls), but among the many ways Cervelli disappointed this year was in not living up to his defensive reputation behind the plate. Still, one could argue that what Cervelli can do back there isn't as important as what Burnett thinks he can do, as the key is getting Burnett to break of that curve to the best of his ability.

If Cervelli does start, Girardi has to decide if he's going to start Jorge Posada at designated hitter. I'd say no. Beyond the fact that, without a third catcher on the roster, pinch-hitting for Cervelli in a big spot would cost the Yankees the DH the following inning, I'd just as soon have Lance Berkman take his hacks at Tommy Hunter as Posada, and if Berkman starts at DH, Posada can pinch-hit for Cervelli himself at the proper juncture and slide right behind the plate without costing the Yankees the DH.

Of course, the key item regarding a Cervelli start is that he's going to hit at the bottom of the order and needn't get more than one or two at-bats before Posada replaces him. Remember, Jose Molina served as A.J. Burnett's personal catcher in last year's postseason, and, as silly as that seemed, he had just seven plate appearances in five games and actually singled and walked during those seven PA, causing little harm to the Yankees' attack. If Burnett gets bounced early, Cervelli will get bounced with him, and if Burnett pitches well, then I suppose you could argue that starting Cervelli was a good idea. It's sort of a fool-proof plan. The only thing it harms is Jorge Posada's ego.