Share All sharing options for: Is Dandy Andy Cooperstown Material?

All but lost in the midst of Cliff Lee's dominating performance last night was the nearly brilliant showing by Andy Pettitte, who aside from a bad break against Josh Hamilton in the first inning — the slugger, who doesn't hit lefties nearly as well as righties, was caught off guard and off balance on an 84 mph cutter but managed to slow his swing and poke the ball 346 feet to right field for a two-run homer — yielded just four singles, three of them to Michael Young, and never let another runner get past first base. In the wake of such an effort, the inevitable discussion of Pettitte's Hall of Fame credentials came up via Twitter. 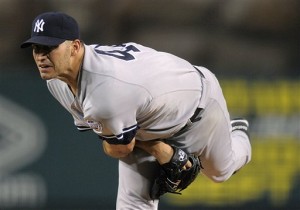 As great as he's been for the Yankees, Andy Pettitte would hardly be a glaring omission from the Hall of Fame (AP).

As much as I've loved watching Petitte pitch in pinstripes, from where I sit, I simply don't see it yet. While Pettitte's regular season won-loss record is a gaudy 240-138, the first point against him is that the Baseball Writers Association of America hasn't voted in a starter with less than 300 wins since Ferguson Jenkins in 1991. Furthermore, Pettitte's record is a product of run support as much as run prevention. He's gotten an average of 5.5 runs per game from his Bronx Bomber teammate over the years, and his 3.88 ERA would be the highest of any Hall of Fame pitcher. Sure, he pitched in a high-offense era; his 117 ERA+ is just one tick behind that of the nearly-enshrined Bert Blyleven (118), but the latter has 63 percent more innings over the course of his career, and 64 percent more strikeouts. Pettitte's ERA+ is also comparable to the likes of the enshrined Gaylord Perry, Dennis Eckerlsey, Phil Niekro, Steve Carlton and Jenkins (all in the 115-117 range), but all except for the converted reliever Eckersley have at least 47 percent more innings than Pettitte, along with much higher win totals — well over 300 for Perry, Niekro and Carlton, 288 for Blyleven, 284 for Jenkins.

Furthermore, Pettitte has just three All-Star appearances and one top-three finish (but four top-five finishes) in the Cy Young voting, low totals for a Cooperstown candidate. His case rests primarily on the willingness of the voters to grant him an enormous amount of credit for his postseason work. Reaching the three-tiered playoffs 13 times in his 16-year career has given him an inordinate number of opportunities that weren't available to the players who preceded him, and he's made enough hay with them to hold a suite of postseason record for pitchers via a 19-10 won-loss record, 42 starts and 263 innings en route to eight trips to the World Series and five rings won. At the same time, his 3.83 October ERA isn't exactly Gibsonesque, and he's taken his share of lumps, totaling seven disaster starts (more runs allowed than innings pitched), none more devastating than his 2001 Game Six World Series debacle, where everybody outside the Yankees dugout figured out he was tipping his pitches, and the Diamondbacks pummeled him for six runs in two-plus innings to force the fateful Game Seven.

Pettitte's Hall of Fame case winds up looking a fair bit like that of Black Jack Morris (254-186, 3.90 ERA, 105 ERA+, 7-4, 3.80 ERA in the postseason, no Cys, a high of 52.3 percent in 11 years on the ballot). My JAWS (Jaffe WARP Score) system, which is built to evaluate Hall of Fame candidates by comparing them to those already enshrined via advanced metrics, doesn't look upon either pitcher very favorably. JAWS gives equal weight to a player's career longevity and his peak performance by averaging his Wins Above Replacement Player total with that of his best seven seasons, effectively double-counting his glory days because they have a demonstrably nonlinear effect of improving his teams' chances of winning championships. When I ran the numbers for last winter's ballot, the average Hall of Fame pitcher totaled 70.3 career WARP, 47.7 peak WARP, and 59.0 JAWS. Morris comes in at 36.2 career WARP, 27.3 peak WARP, and 31.8 JAWS. Pettitte entered the year at 44.7/30.0/37.4. He added 3.1 WARP during his injury-shortened year, and while behind-the-scenes adjustments to the WARP system have now upped his career total to 58.1, his peak score is virtually unchanged, leaving him at 44.5 points. The 38-year-old, who's averaged 2.6 WARP per year over the course of his second act in pinstripes, would need an AARP card before he'd get to the JAWS standard at that rate.

Then too there's the lingering question of Pettitte's admitted use of performance enhancing drugs, namely human growth hormone. At this writing, Mark McGwire, the most qualified PED-tainted candidate to reach the ballot thus far, currently has three out of four voters lined up against him. He needs exactly the opposite ratio to get in, but he's been stigmatized as the symbol of the era. Extrapolating directly from him to Pettitte doesn't tell us much, since Pettitte hasn't been nearly so vilified in the press as Big Mac or, for that matter Roger Clemens, who in trying to clear his name dug himself a massive hole in the courts and is now facing a perjury charge. The bottom line is that we'll know far more about how his PED admission will affect his case by the time Clemens, Barry Bonds, Rafael Palmeiro, Sammy Sosa, Gary Sheffield and a few others face the music in the ensuing years. I suspect at least some of those players to get in, Bonds and Clemens in particular, so I don't think Pettitte's admission would make him an automatic out on that grounds.

And I'm not saying Pettitte definitively won't get into Cooperstown eventually. As I've learned from nine years of evaluating Hall of Fame balloting, voters don't exactly apply uniform standards, and there may be plenty of voters willing put him in if given the opportunity. They're not just mainstream media types either; my former Baseball Prospectus colleague Joe Sheehan has argued on his behalf, for one. My money's on whatever version of the Veterans Committee still survives 30 or 40 years from now making the call in his favor. But right now, I'd be hard pressed to vote for him, at least if I'm going by my head instead of my heart.