ALCS Game 3: If Grant Had Been Drinking at Appomattox

Share All sharing options for: ALCS Game 3: If Grant Had Been Drinking at Appomattox 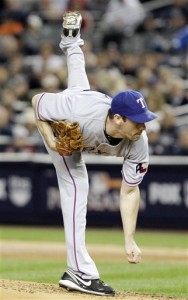 Cliff Lee gave the Rangers a leg up in the ALCS (AP).

The Yankees were helpless against Cliff Lee last night, and that's not a surprise given that Lee is a great pitcher, one of the great control artists of all time, working at the top of his game. Unfortunately, the club's overall offensive struggles in the three games is less surprising given how poorly the team hit in September--.255/.346/.398. Their good hitting against the Twins would seem to be an aberration enabled by a pitch-to-contact staff and Ron Gardenhire's slow hook with Francisco Liriano. Judging by the last six weeks, the Yankees are too old and too cold.

That said, we shouldn't judge by those last six weeks, because we have the whole season to look back on. As old as some Yankees are, they didn't all suddenly hit their expiration date on September 1. Some, of course, might have hit it earlier (Say "Hi," Captain), but to borrow from Monty Python, most of these players aren't dead, they're just resting. Rangers pitcher du jour Tommy Hunter is just the guy to wake them up, a right-handed, low-strikeout, high-home run pitcher. He's about as far from Cliff Lee as you can get without moving to Russia. If Lee is filet mignon, Hunter is hamburger. It falls to the Yankees to actually hit him, and for Joe Girardi to stamp out any signs of demoralization in the clubhouse. A team can run into a great pitcher in a playoff series and still win; recall how Mike Scott dominated the Mets in the 1986 NLCS (one run in two starts, 19 strikeouts, one walk in 18 innings)--the Mets still took the series in six and went on to win the World Series.

Speaking of Girardi, he wasn't at his best last night. Mariano Rivera should have been used in the ninth to hold the game at 2-0. Obviously, Girardi could not have anticipated that his second-line relievers would allow a touchdown in that spot, but his rationale for leaving Rivera in his bullpen rocking chair, that using Rivera for an inning on Monday would have meant not being able to use him for two innings on Wednesday brings to mind Leo Durocher's famous dictum, "Never save a pitcher for tomorrow. Tomorrow it might rain." If you have a grease fire on your stove, you don't spare the fire extinguisher because someday the living room might be burning, you just do what you have to do to save the house NOW.

I alluded to this in an earlier post, but either Rivera has been nursing an injury all season or his age has simply made Girardi spectacularly overcautious. His solicitness about Rivera's health borders on the compulsive and has burned the Yankees time and again in 2010. Rivera retains tremendous value, but not if he's treated as an heirloom and not a pitcher.

The Yankees never scored, so this complaint seems like nothing more than a mere cavil. Chances are the Yankees still would have lost had Girardi gone to Rivera instead of his butterfingered backups. However, had the Yankees gone to the bottom of the ninth down 2-0, the at-bat would have had a totally different cast, with the team within striking distance, and, if Ron Washington is to be believed, facing a had-to-be fatigued Cliff Lee. To the extent the loss was demoralizing to the team (never mind the fans), perhaps 2-0 would have gone down easier than 42-0. But then, these millionaire athletes may not be demoralized at all; playing for pride is so very different than playing for the postseason share that will keep the baby in shoes this winter.

Again, reminding the club of the value of pride and the hittability of Tommy Hunter, and how the latter might lead to the former, is on the manager. We'll see if the spirit is there and the flesh is willing tonight.