The Short Saga of Bam-Bam

Share All sharing options for: The Short Saga of Bam-Bam 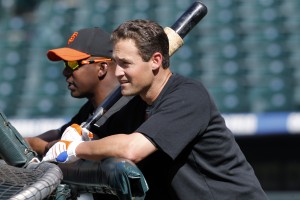 Jay Jaffe and I were talking last night about just how unlikely it is that Hensley Meulens is the Giants’ hitting coach. For those that don’t remember Bam-Bam, Meulens was one of the biggest prospect busts the Yankees had in the late 1980s/early 1990s. Signed out of Curacao, the right-handed-hitting third baseman had tremendous power at a very young age, hitting approximately .300/.377/.558 with 28 home runs in the Carolina League at age 20. There were two problems: Meulens struck out 124 times in 488 at-bats and would only pile on more strikeouts as time went by, and he just couldn’t pick up the ball, fielding .896 that year. That also didn’t get any better.

The Yankees seem to have rethought things by 1989 and started Meulens back at Double-A. I’m intentionally being vague by saying "The Yankees" here, because the team was changing player development directors about once a year at this point and the lack of a coherent plan for Meulens might have been the result of all the changes. Bobby Hofman (one F!) had the job in 1988, George W. Bradley in 1989 and 1990, Brian Sabean in 1991. Meulens hit .257/.384/.391 with 11 home runs in 406 at-bats. He also walked 61 times, so that was something, but he now had not hit since Low-A. He also led the league in errors, fielding .892. Nonetheless, he moved up to Triple-A for a 14-game encore and made his major-league debut on August 23. He started at third base, batting eighth, between Alvaro Espinoza and Roberto Kelly. The Yankees lost 4-1 to the Red Sox that day, but Meulens got his first hit, a ground-ball single off of Mike Boddicker, and was later driven home by Steve Sax.

Meulens played for about a week, didn’t hit, made four errors. When the Yankees acquired Mike Blowers at the trading deadline, he hit the bench and never got off of it. With Blowers slated to be the everyday third baseman in 1990, the Yankees apparently figured better late than never to get the now-23-year-old Meulens a full season at Triple-A. Incredibly, they stuck to it, and it worked out. Meulens played 136 games at Columbus, hitting .285/.376/.510 with 26 home runs. He walked 66 times, struck out 132, which was still problematic, and played most of his games at first base or in the outfield, which was a loss but inevitable given that he had a strong arm and slippery fingers. Meulens was called up in September and spent the month starting in left field. He hit about as well as his Triple-A numbers suggested he might hit, .241/.337/.434, with three home runs in 95 plate appearances. His first longball came off of the Rangers’ great knuckleballer Charlie Hough.

This was enough for the Yankees, who you might recall were in a seriously confused place around this time, to declare Meulens the starting left fielder for 1991. To say it didn’t work out would be an understatement. The erstwhile Bam-Bam hit .222/.276/.319 with just six home runs in 288 at-bats. He struck out 97 times, and couldn’t touch same-side pitchers with an oar. One problem was his stance, which involved setting up so far outside he couldn’t cover the strike zone. Stump Merrill’s lineup initially had Meulens starting with a bit of Mel Hall thrown in, but over time the roles reversed themselves. Bernie Williams came up in July, pushing Roberto Kelly to left field. That eliminated one route into the lineup, and when right fielder Jesse Barfield got hurt later in the season, Merrill merely transplanted the Hall/Meulens platoon to right.

From this point on, the Yankees were pretty much done with Meulens. He spent almost all of 1992 at Columbus, and though on the surface he hit decently (.275/.352/.481, 26 home runs), he struck out 168 times. He got about two months on the big league roster when some injuries hit, but didn’t do anything to distinguish himself and was also disastrously bad at Triple-A. He was released after the season and headed off to Japan for three years. Returning in 1997, he had brief flings with the Braves, White Sox, Expos, and Diamondbacks organizations, getting brief call-ups from the latter two, and finally drifted into independent and Mexican League ball. He hung up his spikes at 35 in 2002, having hit .263/.348/.470 with 150 home runs in 829 games with North American Triple-A teams.

I suppose that Meulens being a hitting coach isn’t any stranger than Charlie Lau or Walt Hriniak, two reserve catchers without particular merit as major league hitters, getting famous for their coaching—or Kevin Long, for that matter, whose main claim to fame as a hitter is what he accomplished at Low-A Eugene—but even given those examples Meulens seems an awfully strange choice given his immense problems making contact, solving the strike zone, and even setting up at the plate. On the other hand, as Yogi Berra might have said, you can observe a lot by watching and Meulens has certainly been around. Moreover, the Yankees’ handling of him probably helped abort any progress he might have made.

The Giants like their former Yankees. In addition to Meulens, they have Dave Righetti as their pitching coach, Roberto Kelly as their first base coach, and Henry Cotto as their baserunning coordinator. Still, you have to wonder about his job security. Meulens can boast a few successes this year, like helping Pat Burrell turn his career around, getting the erratic Aubrey Huff Coin of Fate to land heads up, and continuing the emergence of journeyman Andres Torres, but some important players, like Pablo Sandoval, went backwards as well. It’s pleasant to see a player who failed so badly get to have this second act with a good team. Here’s hoping it lasts.