As we count the ways in which Phil Hughes didn't have it on Saturday, it's worth noting that his most damaging inning may have been the one in which the Ranger hitters didn't even get the ball out of the infield. While the Rangers only collected one hit and scored one run in the first inning, they made Hughes throw a whopping 28 pitches, the most of any of the four innings he completed. The young righty still seemed like an overmatched fighter on the ropes when he came back for the second and surrendered another two runs while needing 23 more pitches, and he never really found a rhythm. 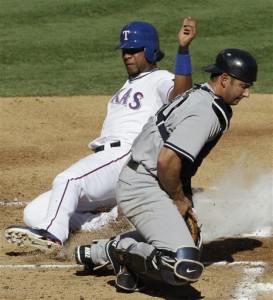 Elvis Andrus and company could run the Yankees right out of the postseason (AP).

The Rangers simply ran the Yankees out of that inning thanks to aggressive, heads-up baserunning. Elvis Andrus began the festivities by chopping a ball past the mound which he beat out for an infield single; amazingly, it was the only ball the Rangers would put in play all inning. Andrus took second on a wild pitch during an at-bat in which Michael Young struck out, stole third during what would ultimately become a Josh Hamilton walk, and broke for home when Hamilton made a half-assed attempt to steal second base; Jorge Posada's throw would have been in time to get the trailing runner had he not pulled up short of the bag, but that wasn't the point; Andrus successfully stealing home on the front end of a delayed double steal was.

The TBS announcers called the move "a college play," but it was the kind of gambit the late-Nineties Yankee juggernaut used to pull off once in awhile. The Yankees' 2010 regular season was bookended by such plays, actually; on opening day against the Red Sox's Josh Beckett, Derek Jeter broke for second and drew the throw from Victor Martinez as Brett Gardner waltzed home, and on the season's final day, Boston's Daniel Nava and Ryan Kalish pulled it off against the Boone Logan-Posada battery.

Such heads-up baserunning is nothing new to the Rangers; they closed out Tampa Bay in the Division Series finale in part thanks to three of the so-called "antler plays" which caught the Rays' defense on its heels. In the first inning of that game, Andrus, who'd singled and stolen second, motored all the way home on a ground ball to first base in which pitcher David Price covered the bag and had his back to the breaking runner. In the third inning, after only gettng to second base while admiring what he thought was a sure home run, Nelson Cruz bolted for third on the first pitch, drawing a rushed throw from catcher Kelly Shoppach that sailed far enough into left field to bring home the run. In the sixth, Vlad Guerrero came all the way home from second base as the Rays failed to complete a 3-6-1 double play. Those were only runs the Rangers got all night, but they were more than enough to stand up behind Cliff Lee's stellar performance.

Those were hardly isolated incidents in the series, either; in all but one game, Ranger baserunning above and beyond the call of duty directly led to runs. In Game One, their lone stolen base came via Hamilton, who had reached on an error and then immediately scored on a double. In Game Two, Andrus was picked off first base by James Shields, but was safe when the pitcher threw wildly, and the runner on third scored; adding insult to injury, Andrus stole second later in that at-bat. In Game Three, Mitch Moreland advanced to third on a passed ball after doubling and then scored on a groundout, the first run of a game the Rangers eventually lost.

The Rangers ranked only eighth in the league in stolen base attempts and fifth in steals and success rate, but they were the league's third-best team on the basepaths overall according to Baseball Prospectus' Equivalent Baserunning Runs metric, which accounts for the value of a player or team's stolen base attempts as well as their advancement on hits, groundouts, fly outs and other means (wild pitches, passed balls, balks). The Rangers were 10.1 runs above average overall despite being slightly below average (-1.7 runs) via the steals. They were 3.0 runs above average on air outs (2nd in the AL), 4.3 runs above average on hit advancement (3rd), and a major league best 5.1 runs above average on other advancement (wild pitches, passed balls and balks). Andrus (8.2 EqBRR), Ian Kinsler (5.0) and Hamilton (3.0) were the top Rangers, with Andrus ranking second in the majors in hit advancement, and first on wild pitches and such. Guerrero (-4.9) was the only Ranger more than 2.0 runs below average; he was bad on stolen bases (-1.4) and hit advancement (-3.4), hardly surprising given his legacy of leg and back woes.

Neither the Rays nor the Yankees were slouches in EqBRR, mind you. The Rays led the majors with 12.8, while the Yankees were fourth in the AL at 2.5, and third in stolen base runs (2.4). Gardner ranked second in the AL at 9.4 EqBRR and 4.6 EqSBR, and Curtis Granderson (2.9 EqBRR) and Jeter (2.3) were both more than a couple runs above average. Nick Swisher (-3.6) and Posada (-5.7, including -3.5 on hit advancement) brought up the rear, the only Yankees more than two runs below average. The Yanks, who put the ball in play less often and are more reliant on the longball to score runs, have only made a couple of key baserunning moves in the postseason thus far, and they weren't nearly as high-leverage as those of the Rangers; Gardner stole third base to lead to a ninth-inning insurance run in Game Two of the Division Series, and Granderson stole second and took third on a throwing error by Joe Mauer prior to a sacrifice fly during the team's three-run fourth inning of Game Three.

Such baserunning derring-do says as much about the team against whom it's perpetrated as it does the perpetrator, and like the Rays, the Yankees seemed to be caught flat-footed on Saturday. Posada is looking particularly more and more unplayable behind the plate with every passing day. After setting a career low with a 15 percent caught stealing rate during the regular season, he dodged a bullet against the sluggish Twins (-7.8 EqBRR — about 18 runs worse than the Rangers), who didn't try a single steal in the first round. The Ranger are already five-for-six in stolen bases during the series, with the lone caught stealing coming via Kerry Wood's unlikely pickoff of Kinsler on Friday night. You can bet that they'll be running more in this series now that they've seen how hapless Posada is behind the plate. Luckily, Andy Pettitte is one of the best in the business at shutting down the running game, yielding just two stolen bases in three attempts this year. Then again, Hughes generally does a good job of holding runners on; only stole 10 in 15 attempts against him in 2010, considerably better than A.J. Burnett (against whom runners went 37-for-42 in steals — yet another cause to worry about Game Four, and no compliment for Francisco Cervelli, his partner for 24 steals and just two kills), CC Sabathia (15 for 18) and Joba Chamberlain (10 for 11). Moving Cervelli behind the plate and DHing Posada's a losing game on two fronts, in that Little Frankie caught just 14 percent of baserunners, and that the DH platoon of Marcus Thames and Lance Berkman has been especially productive thus far, with big hits in four out of the Yankees' five postseason games.

The bottom line is that the Yankee defense will need to be more vigilant than they were on Saturday in order to avoid getting run out of this series. And while frittering away baserunners out of misguided allegiance to smallball tactics isn't a good idea, it certainly wouldn't hurt if they found a heads-up play or two of their own amid their bag of tricks.