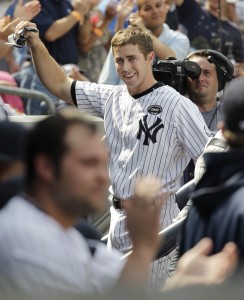 Colin Curtis was last year's breakout Yankee in the AFL, but this year's group is altogether more promising. (AP)

While Don Mattingly tunes up for his managerial debut, he will be in familiar territory as far as team representation is concerned because he’ll be managing seven Yankees prospects. The Bombers have room to send one more player to Arizona, though it’s not a requirement (six is the minimum). Only a few days into the AFL season, here’s a quick look at the goings-on in the desert.

Manny Banuelos, LHP: The southpaw wound up in Arizona after the Mexican League team the Yankees purchased him from relinquished their control of his winter ball rights. Fact is, the kid needs innings after missing nearly three months of the season due to an emergency appendectomy. Pitching in the Mexican League would have been fine, but pitching in Arizona is better because the Yankees can actually control what they lefty does.

After a nearly month-long layoff between the end of Double-A Trenton’s season and the beginning of the Fall League, Banuelos looked rusty in his first (and thus far only) trip to the mound. Pitching two innings on October 13, he gave up four hits and one walk while recording only one strikeout. There’s really no reason to be concerned. The AFL is a huge hitter’s league, and combine that with the length between Banuelos’ appearances and it’s more or less expected he’ll struggle a bit in the early going.

Craig Heyer, RHP: Raise your hand if you would have guessed at the beginning of the year that Heyer would be in consideration for a 40-man roster spot by August and get sent to the AFL to prove his worth? You in the back, put your hand down, liar! Heyer has never been considered much of a prospect, but 2010 made for a spectacular coming-out party. He missed a month of the season following his mother’s death, but even still, he displayed mind-boggling control (six walks in 92 innings) and a great aptitude for killing worms. Now the Yankees have to decide how much they value the 24-year-old who hasn’t pitched above A-ball.

Heyer pitched two innings on October 14, going two innings and throwing goose eggs while recording one strikeout. Five of the batters he faced were lefties, and though it doesn’t mean a whole lot, it’s encouraging to see him shut down opposite-handed batters. He is certainly a dark horse for the 40-man roster, and his pinpoint accuracy and ground-ball abilities will be what shoots him through the farm.

George Kontos, RHP: Another man in the mix for a 40-man roster spot, Kontos spent part of 2010 on the mend from Tommy John surgery, and the other part pitching out of the bullpens in Tampa, Trenton, and Scranton. It’s interesting that the Yankees didn’t bring him back as a starter; he has always been a starter in their system and it’d be the quickest way for him to accumulate innings, though he does project as a reliever.

Out in the desert, Kontos has gotten himself into a pair of games, totaling 2 1/3 innings, four hits, three runs (two earned) one walk, and five strikeouts. His most recent appearance (October 15) accounted for the majority of the carnage. However, there’s no need to fret now. There is plenty of season left.

Kontos’ time in the AFL is very likely what will determine if the Yankees keep him around; the highest level he has reached is Triple-A, and it’s very likely a team will be looking to snatch up a cheap, serviceable arm to shore up their bullpen.

Brandon Laird, OF: After an awesome season at the dish, the Yankees sent Laird west to work on his fielding—from the outfield. With his huge year, Laird is all but assured of a roster spot this winter, and New York is probably thinking they have a potential utility player on their hands, a guy who can play the infield and outfield corners. His power could certainly be an asset off the bench, so this is Laird’s chance to show his versatility and why the Yankees should move him up in the pecking order for a call up should someone go down on the big-league team.

The Southern Californian has played in three games, racking up 12 at-bats and is back to smoking the ball. Laird has six hits, including a double and homer, one walk, and four strikeouts. It’s a small sample size, of course, but the K-rate is slightly higher than Laird posted at Double- and Triple-A. It’s hard to take anything away from that, though; the hits and the contact are more important, so long as the righty doesn’t start forming any bad habits.

Jose Pirela, SS: The Venezuelan was a replacement for Corban Joseph (wrist surgery), and though he’s not a major prospect, it’s worth seeing if he has potential major-league utility. Pirela is a 20-year-old who signed as an international free agent in 2006, giving the Yankees one more year to evaluate. Playing at Tampa this season, he looked okay, posting a .252/.329/.364 triple slash. Speed is the name of Pirela’s game; he swiped 30 bases and was caught seven times, and he smacked 13 triples this year.

Pirela has three starts since arriving in Arizona, totaling 11 ABs and collecting two hits, one walk, and one stolen base. It’s more of the same old, serviceable enough, but he’s going to have to show more of an aptitude for getting on base to look more appetizing for the Yankees’ tastes.

Ryan Pope, RHP: After converting to relief midseason, Pope thrust himself into consideration for a 40-man roster spot and as a potential callup in 2011. He became a go-to guy out of the Trenton bullpen in 2010, and given his success and clean injury history, he may get a roster spot over a guy like Kontos. He’s not a power pitcher—his velocity usually sits in the low 90s—but he is able to get a little more heat as a reliever.

The Floridian has made one appearance in Phoenix, tossing an inning and giving up a hit and collecting strikeout. That’s typical of Pope’s regular performance, and as a former starter, he’s a guy who can give more than one inning when he’s called upon.

Austin Romine, C: Starting in June, it looked like Romine had fallen off a cliff. He wasn’t producing at the plate, and it was hard to attribute it to him tiring out being so early in the season. Finally at the end of August and through the Double-A playoffs, Romine tapped into the elixir of life and looked like he had solved his nearly three-month woes. It was his first season of flying solo behind the plate, and he’s in Arizona to get a final tune-up before he is likely assigned to Triple-A Scranton for the 2011 season.

Through three games, it looks like Romine is picking up where he left off in the playoffs. He has five hits in 13 ABs with a double, four Ks, and a stolen base. As I’ve said, the AFL is a hitter’s league, and a guy with Romine’s abilities is expected to mash, but it’s also a great time to tinker with a swing and boost a player’s confidence if they hit well. Another benefit of the AFL will be Romine working with pitchers with different repertoires and pitch speeds; he may be seen as the true heir apparent to Jorge Posada, but the young backstop still has a lot of refining to do on his defense.