Share All sharing options for: ALCS Game 1: The Henrich Maneuver 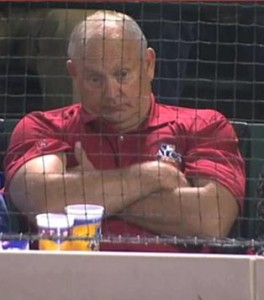 One of the great games in Yankees postseason history took place on October 5, 1941. It was World Series Game 4 against the Dodgers at Ebbets Field in Brooklyn. The Yankees were trailing 4-3 when they came to bat in the top of the ninth. Dodgers manager Leo Durocher, who was one of the few coaches who thought much about relievers back then, had his closer, Hugh Casey, in the game to face the top of the order. Casey induced both Johnny Sturm and Red Rolfe to ground out, bringing up Tommy Henrich as the Yankees’ last hope. Henrich failed, sort of: Casey struck him out on a pitch in the dirt, but when the ball got away from catcher Mickey Owen, he was able to make it to first base.

There were still two outs. Henrich’s dash shouldn’t have mattered. Yet, the Yankees just kept coming. Joe DiMaggio singled. Charlie Keller doubled to put the Yankees up 5-4. Bill Dickey walked. Joe Gordon doubled to drive in two more runs. Phil Rizzuto walked. Finally, mercifully, Yankees manager Joe McCarthy declined to pinch-hit for his own pitcher, and Johnny Murphy grounded to shortstop to end the rally. The Yankees were up 7-4, and Murphy retired the demoralized Dodgers in order in the bottom of the ninth.

The eighth inning of Game 1 of the ALCS was a lot like that, beginning with Brett Gardner’s Henrich-dash to first. Derek Jeter, the DiMaggio of the current era, reached down for the big hit he really hasn’t had all season (shades of DiMaggio’s sole home run in the 1951 World Series) and doubled him home. At that point, Ron Washington went to his bullpen, which has been his friend all season long. Rangers relievers were among the best in baseball, but you wouldn’t have known it on Friday night. It wasn’t necessarily their fault, as one of the Yankees’ subtle weapons, patience, kicked in. Nick Swisher saw 4.02 pitches per plate appearance this year. Mark Teixeira saw 3.96. Both figures are well above average. They may not always hit, but they are rarely easy outs. Both walked to load the bases with no outs. Washington, following his usual script, went to right-hander Darren O’Day.

Let us pause here to trash the departed Omar Minaya one more time. The Mets had acquired O’Day from the Angels in the Rule 5 draft prior to the 2009 season. He made the team, but the geniuses of Queens gave him four games and three innings before putting him on waivers. The Rangers claimed him and the rest is history: 136 games, 1.99 ERA. Good work, boys.

O’Day did what he was supposed to do against Alex Rodriguez, induce a grounder. The problem was that Rodriguez hit it so hard to third that it jumped on Michael Young like an over-eager mastiff and woofed on into left field for a single. Two more runs scored, making it 5-4 in favor of the Rangers. Here is where Ron Washington came apart. I hope Joe Girardi won’t be too offended if I say that Washington went Coffee Ron. Afraid to let O’Day face Robinson Cano, he called for lefty Clay Rapada. There are two problems here: (1) lefties don’t hurt O’Day that badly, and he’s been one of your stalwarts all year; (2) although Rapada has been very hard on lefties in his brief major-league career (.186/.305/.257 in 83 PAs), he’s not someone the Rangers could find a place for prior to the September roster expansion. He pitched all of 13 games and nine innings. You’re going to ask this guy to get one of the biggest outs of the season? He probably doesn’t even know where his car is parked.

Cano hit a line drive up the middle for another RBI, and Washington had now backed himself into a corner. He couldn’t let Rapada face Marcus Thames, because as good as Rapada is against lefties, that’s how bad he is against righties. Normally, an opposing manager might chase Thames from the game here with a scary normal-hander. Washington opted not to do that, bringing in another lefty, Derek Holland. Washington made one or both of two decisions: (A) the Rangers had loaded their pen with so many lefties for this series that he was leery of using one of his actual righties for fear of running out, or (B) he preferred facing Thames to confronting the Death Star-like power of Lance Berkman. Let me change the punctuation there: Lance Berkman?

Holland did turn out to be the right choice, sort of, as he retired the batters he faced in order—that is, the batters he faced after Thames. Thames broke his bat, dropping a single into shallow left, and A-Rod scored the go-ahead run. A master class in bullpen usage it was not. Perhaps the greater irony was that Girardi had chosen not to manage the game at all, bringing in his "I concede and will live to fight another day" relievers Joba Chamberlain and Dustin Moseley. The pair stopped the bleeding and made the big eighth possible. It won’t happen again, but with luck it won’t have to.

The only dangling plotline from this adventure is CC Sabathia’s uncharacteristic performance. It is rare he looks so helpless on the mound. Watching him struggle, I kept thinking, "This is the guy who everyone wanted to pitch the entire month of October on three days’ rest?" Of course, that’s the whole point—this wasn’t that guy. Sabathia’s command wasn’t great against the Twins either, but for now it’s safer to assume that this was an aberration than another trend marker.

Besides… A.J. Burnett is going to pitch a shutout, so it doesn’t matter… Right? Right?