Share All sharing options for: Yankees vs. Rangers ALCS Breakdown: The Starting Rotations

This is part three of my four-part head-to-head breakdown of the Yankees' and Rangers' ALCS rosters. For those who missed them or want an easy reference link, here are the first two parts:

I'll be back later today to wrap things up with the bullpens. As for the rotations . . . 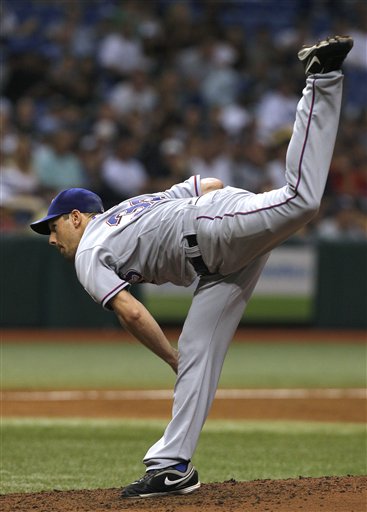 When I opined that the Rangers would be a more favorable ALDS opponent for the Yankees than the Twins (harhar), one reason was that the Yankees have handled C.J. Wilson well in three starts this year. They scored five runs (three earned) off him in a rain-shortened six-inning game in the Bronx back in mid-April, bounced him with one out in the sixth in Arlington in early August, then roughed him up pretty good on September 10, sending Wilson to the showers after three frames with a four-spot on the board. Though the Rangers won the latter two games, Wilson went 0-1 with a 5.65 ERA and 1.88 WHIP while averaging less than five innings per start against them on the season. More recently, even with his strong 6 1/3 shutout innings in his lone ALDS start, Wilson has gone 2-3 with a 4.89 ERA in his last seven starts. If nothing else, the Yankees should be able to make Wilson throw a lot of pitches and get him out of the game early, as both the Yankees and Wilson are among the major league leaders in walks and pitches per plate appearance.

Given that, this would seem like a bit of a mismatch, but Sabathia hasn’t been especially impressive of late, giving up five or more runs in three of his final seven regular season starts and failing to impress in his Game One start in the ALDS, giving up four runs (three earned) in just six innings and walking in the tying run in the bottom of the sixth right after the Yankees had taken the lead with a four-spot on the top of the inning. CC did dominate the Rangers in that rain-shortened April game opposite Wilson (6 IP, 3 H, 1 R, 0 BB, 9 K), but he hasn’t started a game in Arlington since June 2008, when he was still rotation-mates with Cliff Lee with the Indians. Still . . .

Phil Hughes only appearance against the Rangers this year was a perfect relief inning on September 10, but the mound in the Ballpark in Arlington has been a comfortable place for him in his young career. It was there that he took a no-hitter into the seventh inning in just his second major league start back on May 1, 2007, and in his only other start there, in late May of 2009, he held the Rangers scoreless for eight innings on three hits and a walk. Those two outings may have little predictive value, but combine those positive impressions and apparent comfort in the ballpark with Hughes’ favorable road splits (3.47 ERA and just five of 25 home runs allowed away from Yankee Stadium this year) and his encouraging and confident domination of the Twins in the ALDS clincher on Saturday (7 IP, 4 H, 0 R, 1 BB, 6 K), and there are many reasons to expect good things from Hughes in this series given that both of his starts are scheduled to occur in Texas. Also, Hughes’ last three starts have come against the Rays, Red Sox, and Twins and have seen him post a 1.86 ERA and 1.09 WHIP while allowing just one home run in 19 1/3 innings, though all three of those starts came at home and included favorable results on balls in play.

Colby Lewis was drafted by the Rangers way back in 1999 but passed through four other organizations then spent two years with Japan’s Hiroshima Carp before finally returning to Texas and putting up a strong season in the Rangers rotation this year at the age of 30. Looking at their peripherals only, Lewis actually out-pitched Wilson this year, though curiously it was Lewis who walked five Rays in five innings in his ALDS start. Still, Lewis only allowed two hits and held the Rays scoreless over those five frames, and he was sharp coming down the stretch, going 3-1 with a 2.37 ERA and 31 strikeouts in 30 1/3 innings over his final five starts of the regular season. Add in that ALDS start and that ERA drops to 2.04.

Lewis did not face the Yankees this year and, in fact, has only faced three of the hitters on the Yankees' ALCS roster in his career, holding Jorge Posada and Lance Berkman hitless over 13 combined at-bats, but giving up three hits, including two homers, in five at-bats to Derek Jeter. Jeter and Posada last faced him in 2003, while Berkman, while still with the Astros, went 0-for-6 with three strikeouts against Lewis during interleague play earlier this year.

On paper, this is a compelling matchup between the starting pitcher with the greatest posteason career (Pettitte) and one making an argument for having the greatest postseason peak (Lee). On the field, it’s likely to be all Lee. Pettitte settled a lot of nerves with his seven strong innings in Game Two of the ALDS, but here he simply draws a bad lot.

Lee has made seven postseason starts. Three of them have been complete games. All have lasted at least seven innings. Six of the seven saw him hold his competition to one or no earned runs (five of the seven saw him limit them to one or no runs, period), and four of them have seen him strike out ten or more batters without walking any. Altogether, Lee is 6-0 with a 1.44 ERA, just one home run allowed (to Ben Zobrist), and 54 strikeouts against just six walks in the postseason. The only pitcher who got off to a better start in his postseason career was old friend Orlando “El Duque” Hernandez, who went 7-0 with a 1.22 ERA in his first eight postseason starts, but Lee’s dominance in the strikezone blows El Duque’s smoke-and-mirrors act away.

Lee has been so good in his brief postseason career (all seven of his starts have come this year and last) that it’s actually hard to argue that his dominant outing at Yankee Stadium in Game One of last year’s World Series was his best postseason start. Still, that’s the one that sticks in the minds of Yankee fans and is sure to be on everyone’s lips as he takes the hill at the new stadium again on Monday. It’s worth remembering, however, that the Yankees got to Lee in his next start, which remains his only unimpressive postseason start. The Yankees scored five runs off Lee in seven innings while striking out just three times in Game Five of the 2009 World Series. They also score four runs off him in 6 1/3 innings during Lee’s poor August with the Rangers, and scored four runs (three earned) against him in his penultimate start with the Mariners. Of course, two of the four runs in that final Mariners start came in the ninth inning of a lop-sided Mariners win, and Lee struck out 20 Yankees without walking any in those two regular season starts. Lee then held the Bombers to one run over eight innings in their last meeting in mid-September.

The Yankees can get to Lee, but I don’t expect they will. Andy Pettitte held the Rangers to two runs iver eight innings in his only start against them this year back on April 18. He’ll likely have to do better to beat Lee in Game Three, and the less said about the possibility of facing Lee in a potential Game Seven the better.

Hunter missed the first two months of the season with a strained oblique, then went 8-0 with a 2.31 ERA in his first ten starts back. That was with the help of a .227 opponents’ average on balls in play. Since then, however, Hunter has gone 5-5 with a 5.09 ERA in 13 starts, including his four-innings in Game Four of the ALDS. He did, however, impress in his lone outing against the Yankees, uncharacteristically striking out eight while limiting the Yankees to a pair of runs over five frames before his start was cut short by rain.

Burnett opposed Hunter in that game with a similar rain-shortened outing (4 IP, 2 R, 6 K). As awful as Burnett has been this season, he has pitched well in three starts against the Rangers (2.50 ERA, 1.28 WHIP, 17 Ks in 18 IP). That Burnett finished the season by going 1-7 with a 6.61 in 12 starts speaks far louder, though a .337 BABIP played some small role in that performance, and on the season he was far better at Yankee Stadium (4.59 ERA), which is where Game Four will take place, than on the road (5.76).

To be honest, I have a strangely positive feeling about this game. Part of me expects the Yankees to win it either because Burnett pulls a strong outing out of his, uhm, hat, or because they Kenny Rogers it. Maybe it’s the nostalgia created from the matchup with the Rangers, who were three-time patsies for the dynastic Torre Yankees of the late ‘90s, but when I think of Burnett, I think of Rogers, the loathed fourth starter for the 1996 team who posted a 14.14 ERA in his three postseason starts that October, failing to record an out in the fourth inning in any of them, only to watch the Yankees’ offense and bullpen pull out a win in all three games. Of course, that’s just my gut talking.

Based on the above, the Rangers will win this series in six, but think the Hughsie-Lewis matchup, which is likely to be the pivotal one in this series, is more favorable for the Yankees than the numbers show, and I have that oddly good feeling about Game Four. There’s also the matter of how well the Yankees have been hitting of late (.314/.351/.514 as a team in the ALDS) and their superior defense. Still, with Lee scheduled for Game Seven, the Yankees will likely have to take this series in six if they want to take it at all, and that means, once again, winning both of Sabathia’s starts.