Does the Last Ride of the Four Begin Tonight? (A Tabby Named Mariano)

Share All sharing options for: Does the Last Ride of the Four Begin Tonight? (A Tabby Named Mariano)

I had an uncomfortable moment with my five-year-old son the other night. We were out at a store and saw a picture of a black and white cat. The cat was nigh-identical to one I had when I was his age and had greatly loved. Not really thinking about the implications, I said, "See that cat? I used to have one just like it."

My son said, "What happened to him?"

I hesitated, because I didn’t want to have the mortality conversation with him. I don’t really want to have it with anyone, or myself. I decided to chicken out and be vague about it. "He got old," I said eventually, hoping he wouldn’t ask, "And what happened after that?" Instead, he asked, "Everyone gets old?" 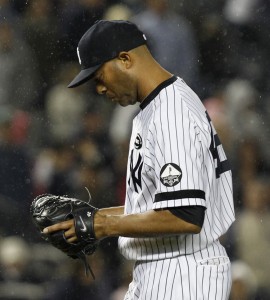 Just like all my cats gone to the great feline beyond, the great Yankees of the current epoch are not immune to the ravages of time. Mariano Rivera will begin his 41st year in late November. Jorge Posada turned 39 in August. Andy Pettitte will hit 39 next June, about 11 days before Derek Jeter turns 37. All four showed signs of aging this year. Posada spent extended time on the disabled list and couldn’t catch for extended periods of time, if you can call his increasing immobility "catching." Pettitte pitched well when healthy, but he spent a long time nursing his groin, which ought to be an anatomical impossibility. Jeter had the worst year of his career, and had it in such a way that it is very hard to believe that it was a mechanical failure or a fluke of bad luck. Rivera was the closest to his classic form, but the Yankees had to make a concessions to his age; Rivera was used less (in terms of games and innings) than any closer who had 30 or more saves except for the problematic David Aardsma and Kevin Gregg.

Posada is under contract for next year, but given his stiff play he’s going to have an increasingly difficult time holding off the bevy of catching prospects the Yankees have on the way, Jesus Montero, Austin Romine, Gary Sanchez, J.R. Murphy—one of them is going to knock Jorge out of the Bronx and into a Cooperstown rocking chair. Pettitte, Jeter, and Rivera are unsigned. Pettitte is flirting with retirement, as he seemingly has been for 10 years. Jeter will be back, but is clear that he will be playing out the string, and the team will have to find a new engine if not a new heart. Rivera will persevere, but as good as he is, his declining workload—his innings have been shrinking for six consecutive seasons—will make it increasingly difficult to justify his roster spot even if he continues to pitch well. Those high-leverage innings he can’t pitch don’t just disappear, they get displaced onto other, less talented pitchers. Like it or not, and personally, I hate it, because I’d like those cats to stay around forever, a change is coming. 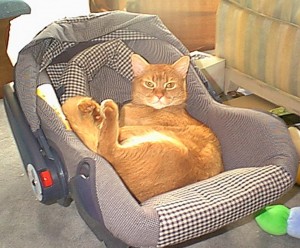 They outgrow the baby carrier eventually. Then you have to start thinking about the future. (Author's Collection)

It’s coming whether the Yankees win or lose the series that begins tonight, though obviously the latter would hasten that change a bit. I suppose my only point is that time rushes on, an endless chain of cats and replacement cats marching on into the grey. Jeter, Rivera, Posada, Pettitte, four Hall of Famers, or two first-ballot Hall of Famers and two that are very close to being Hall of Famers. Great cats. They were great company for years, but the end could come at any time, faster than we might want or expect. I am not talking about baseball, but about life and baseball (and cats, and five-year-olds). In some ways, this series, and if the Yankees go on, the one after, are life and death matters. The season will end, and a brittle page will turn. Life will go on. There will be new cats. We will love them as well, but differently. Enjoy the game, watch the clock tick.

"As for me, except for an occasional heart attack, I feel as young as I ever did."—Robert Benchley