A Two-Step Tale of Texas Turnaround

Share All sharing options for: A Two-Step Tale of Texas Turnaround 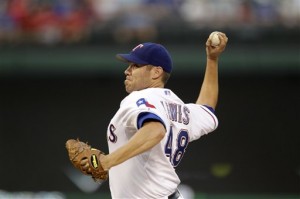 Between their last postseason meeting with the Yankees in 1999 and their impending one, the Rangers spent a decade wandering in the AL West desert due primarily to one problem: a lack of starting pitching. Playing in a hitter's ballpark during a high-offense era, the team simply didn't have enough quality arms to remain competitive, and they famously watched free agent Chan Ho Park turn from a frontline pitcher to a palooka as he moved from Dodger Stadium (the NL's most pitcher-friendly park) to what was then known as The Ballpark at Arlington. Year after year they sent punching bag after punching bag to the mound; in seven of the nine seasons from 2000 through 2008, they had at least three pitchers who made more than 10 starts with ERAs at least 10 percent worse than the park-adjusted league average (ERA+) — pitchers near the replacement level. They had at least two of them in every year of that timespan, and 30 in all:

Baseball Prospectus has an unwieldily-named stat called Support Neutral Lineup Adjusted Value Above Replacement (SNLVAR), a Win Expectancy-based measure of how far above replacement level a starter or team rotation is. As I noted early last season at BP, the Rangers hadn't been out of the league's bottom three in that category since 1996:

FRA_S is the Fair Run Average of the rotation as a whole, their measure of runs allowed per nine innings after adjusting for the bullpen's performance in handling inherited runners. Early on, the Rangers did have enough offense to overcome their rotation woes; Juan Gonzalez and Pudge Rodriguez were at the top of their games, accompanied by the likes of Will Clark and Rafael Palmeiro at various points. But once Gonzalez left as a free agent after the 1999 season, the club could no longer outslug its competitors, and they posted just one winning season over the next nine years due largely to their rotations' craptacularity, which in turn taxed the bullpens because their pitchers couldn't pitch deep into games. It was a vicious cycle via which the Rangers pedaled down the road to nowhere.

The turnaround began last year, when the influence of team president and Hall of Fame hurler Nolan Ryan began to take hold. The Rangers took a page from the 2008 Rays' blueprint and made a significant commitment to upgrading their defense by promoting 20-year-old shortstop Elvis Andrus directly from Double-A. The team's Defensive Efficiency, their rate of converting balls in play into outs, rose from .670 (last in the league) to .699 (second), a 29-point jump that took a backseat only to similar plans by the Mariners (who improved by 30 points) and Reds (32 points) and ranked among the top 10 year-to-year turnarounds ever.

This was particularly important because the 2008 and 2009 Ranger pitching staffs put tons of balls in play, as they ranked 13th and 12th in the league in strikeout rate, respectively. Even with just a total of 31 starts from two pitchers (swingman Dustin Nippert and rookie Derek Holland) with K rates above the league average (6.9), the Rangers jumped from 79 wins to 87, and they remained in contention until mid-September. The improved defense helped Kevin Millwood (5.6 K/9) post his first ERA under 5.00 in three years, turned Scott Feldman (5.4 K/9) into a 17-game winner, and gave Tommy Hunter (5.1 K/9) a foothold in the rotation for the first time. Of course, it didn't hurt that they poached one of the most respected pitching coaches in the game, Mike Maddux, from the Brewers to oversee their staff.

Pitchers who don't miss many bats aren't great bets for long-term success, while those who do more often are; one need look no further than all-time strikeout king Ryan, who pitched until he was 46 and was still striking out a hitter per inning until his injury-abbreviated final season. For that reason, the Rangers still sought to upgrade their rotation. They traded Millwood to the Orioles and decided to convert C.J. Wilson, their top lefty reliever and sometime closer (2.81 ERA, 10.3 K/9 and 14 saves in 2009), into a starter. They took a free-agent flier on oft-injured by occasionally electrifying Rich Harden, and signed one Colby Lewis to a two-year, $5 million deal.

Chosen in the supplemental phase of the first round of the 1999 draft — compensation for the loss of free agent Todd Stotttlemyre to the Diamondbacks — Lewis had been a total bust in his first go-round with the Rangers, posting an ungodly 6.83 ERA in 176.2 innings from 2002-2004 while beset by . control problems and rotator cuff woes. The Rangers sent Lewis to the hill as a starter 26 times in 2003, and for their trouble he rewarded them a 7.30 ERA — the fourth-highest mark of any pitcher with at least 20 starts in the Wild Card era (interestingly enough, Darren Oliver, now the Rangers' top lefty reliever after a long and winding road of his own, ranks third). By the end of the 2004 season, he was waiver bait, and he found little success while bouncing to Detroit and then Oakland before heading to Japan to pitch for the Hiroshima Carp of the Japanese Central League.

While in Japan, Lewis finally got his stuff together, evolving into a control freak with an everything-but-the-kitchen-sink repertoire. He went a combined 26-17 with a 2.82 ERA 9.4 K/9 and 1.2 BB/9 in 2008 and 2009, impressing both scouts and statheads; our own preseason PECOTA projection at BP suggested he could maintain a better than three-to-one strikeout-to-walk ratio and an ERA below 4.00 at the major league level.

The duo were a big reason why the Rangers captured first place in the AL West in early May and gradually built up enough of a cushion that general manager Jon Daniels could hunt bigger game, snatching Cliff Lee out from under the Yankees' noses just before the All-Star break. The Rangers were 14 games above .500 on July 9, the day the deal went down, holding a 4 1/2 game lead in the AL West. They ended the year 18 games above .500, with a nine-game lead. While Lee certainly deserves plenty of credit for the masterful performance which helped the Rangers take their first postseason series in franchise history, Lewis and Wilson played bigger parts in getting them to that stage, and despite being overshadowed, they combined to yield just two unearned runs in 11.1 innings during their own Division Series starts. They're bold gambles who paid off for the Rangers, and pitchers to reckon with in their own rights. In order to avoid facing Lee in a Game Seven for the right to advance to the World Series, the Yankees will have to beat them more than once — a tall order indeed.