Share All sharing options for: These Keys Three: ALCS Edition

I've got another 5,000-word megapreview up at Baseball Prospectus, breaking down the upcoming ALCS between the Yankees and Rangers along the lines of lineups, benches, rotations, bullpens, defenses and managers. As I said last time around, more than any articles I do during the regular season, I love doing the Playoff Prospectus. Some folks may only care about the predictions at the ends of those monster pieces, but while any boob can tell you "Yankees in four," it takes far more to be entertaining and informative over the course of a few thousand words. In any event, while I’ve broken into minutiae there, I wanted to zoom out to highlight a few key points here. 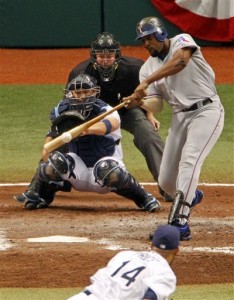 Like most of the Rangers' hitters, Vladimir Guerrero is a bigger threat to lefties than he is righties (AP).

1. The Rangers' lineup is well-constructed to battle the Yankees.
In CC Sabathia and Andy Pettitte, the Yankees could throw as many as four high-quality left-handed starters at the Rangers. Luckily for Texas manager Ron Washington, he's got no shortage of quality right-handed bats to counter that. In fact thanks to a multi-position platoon involving the outfield corners, the Rangers can field a lineup with just two lefties, Josh Hamilton, who hits third, and first baseman Mitch Moreland, who will hit eighth or ninth. Lefty outfielder David Murphy is most likely to start in left field versus righties, with Nelson Cruz in right field, but against southpaws, the much-maligned ex-Met Jeff Francoeur starts in right, with Cruz sliding over to left. Frenchy (who incidentally got off a nice dig at the Mets today: "I always wanted to know what it was like to play meaningful baseball in New York and I'm going to have the opportunity.") is absolutely clueless against righties (.256/.296/.403 career), but he's quite playable against lefties (.299/.343/.481 career), something neither Braves manager Bobby Cox nor Mets manager Jerry Manuel ever bothered to figure out. As for first base, Washington started righty Jorge Cantu in the Division Series opener against southpaw David Price, but after his 0-for-4, three-strikeout performance — his timing was so off, you could have napped between his swings — the Rangers' skipper switched things up in the rematch and went with the rookie Moreland, who only saw 23 plate appearances versus lefties in his two months in the majors. Though he went 0-for-2 against Price, Moreland did double against Rays closer Rafael Soriano in the ninth inning.

Meanwhile, Hamilton hit a fairly ordinary .271/.331/.458 against lefties but an unreal .401/.447/.716 against righties, a performance that sticks out like a sore thumb in that Cruz (who tore up the Rays in the Divison series, going 8-for-20 with extra base hits in each game) and Murphy are the only other righties besides the number-nine hitting Moreland who had OBPs above .328 and slugging percentages above .425 against righties this year. As the Rangers' lineup is constructed, Yankee righties Phil Hughes and A.J. Burnett can afford to pitch around Hamilton if necessary. Washington could theoretically counter this by swapping Cruz and Vladimir Guerrero in the fourth and fifth spots, but that's a move he has yet to try all season.

2. Cliff Lee's lack of availability is a big problem for Texas.
As Joe Girardi's three-man rotation and liberal eighth-inning use of Mariano Rivera showed last fall, the team that puts the most innings in the hands of their best pitchers in the postseason has a significant leg up in winning a championship. But to do so requires a favorable schedule as well as pitchers willing and able to work on short rest, something Texas doesn't have here.

Because the Rangers needed him in the decisive fifth game on Tuesday, Lee — who was masterful in his 120-pitch route job — will be unavailable until the third game of the series. Theoretically, he could return for Saturday's Game Two on three days' rest, but at the major league level, he's never worked on short rest before. Even with old-school Hall of Fame hurler Nolan Ryan — who's been quite vocal about the need to toughen up today's pitchers by throwing more often — as team president, the Rangers' brass is reluctant to ask Lee to step into uncharted territory. And Lee, a free agent-to-be who's likely in line for a nine-figure deal, is looking out for Cliff Lee's interests first and foremost, so he isn't volunteering, either.

Lee would do well to look to the example of former teammate Sabathia, the last pitcher to sign such a big-money deal. Facing a similar payday following the 2008 season, Sabathia simply put the Brewers on his back down the stretch, voluntarily working on three days' rest four times in a row to carry them to their first playoff berth since 1982. His ERA in those first three games was a sterling 0.83, though admittedly, he faltered in his Division Series start. On the other hand, while Sabathia did also work two starts on short rest in the 2009 postseason, they weren't back-to-back, which is what it would take to get Lee to the mound for Games Two (October 16) and Five (October 20) — not to mention what it would take to get Sabathia to the hill on a One-Four-Seven schedule. Another alternative would be to have Lee could work Game Two on short rest and come back for Game Six (October 22) on five days' rest.

As it stands, in a six-game series, the Rangers would only get him to the mound once, and it's tough to see them winning under such a scenario. Because from a historical standpoint, it's far more likely for a series to end before seven games than it is to reach the seventh. Wild Card era ALCS have averaged 5.8 games in length, with six ending before six games, and only four going the distance. Throw in the NLCS along that timeline and the average is 5.73, with 12 ending before six games and only eight going the distance. Include the World Series to cover all seven-game series of the Wild Card era and the average drops to 5.6 games in length, with 20 of the 45 (44 percent) ending before six games and only 11 (24 percent) going the distance. So without knowing anything about the two teams involved, we know that there may be only about a one-in-four shot that Lee gets that second shot. Furthermore, the only way the Rangers can win a seven-game series is to win Lee's second start, whereas if his team were to lose his second start in a Game Five or Six, there are other scenarios via which they could still win the series.

3. The Yankee rotation's order is less of an issue this time around than it was in the Division Series.
As you're no doubt aware by now, the Yanks will work with a four-man rotation against the Rangers, with the unloved A.J. Burnett taking that Game Four start because to go with a three-man rotation would require Sabathia to start on three days' rest twice in a row as noted above. Burnett did have some success against Texas this year, holding Ranger hitters to a .232/.303/.319 line in his three starts while putting up a 2.50 ERA. Furthermore, he'll be squaring off against Tommy Hunter, the most hittable of the Rangers' quartet of starters; Hunter lasted just four innings in his Division Series start against Tampa Bay. In other words, that's a winnable game for the Yankees provided Burnett doesn't implode.

Beyond that, the Yankees have decided to flip-flop Pettitte and Hughes, with Phantastic Phil pitching Games Two and Six in Texas and Dandy Andy going in Games Three (da Bronx) and Seven (Texas). Rangers Ballpark in Arlington — that's it's official name — favors hitters, though it's not as home run-conducive as Yankee Stadium is; teams hit 1.07 homers per game there in 2010, compared to 1.38 in the Bronx. Hughes has a favorable history pitching there, having pitched 15.1 scoreless innings at RBIA in his career, via his injury-aborted no-hit bid in 2007 (sigh), eight innings of shutout ball last year before he was sent to the bullpen, and a scoreless inning of relief back in September. And we already know that in two years of NuYankee Stadium, he's got a higher ERA at home (4.07) than on the road (3.48).

By comparison, Pettitte has an 8.22 ERA in 38.1 career innings at RBIA, though most of that is ancient history; he hasn't started there since 2008, and has just two starts there in the past 10 years, one good (2007, six innings, two runs) and one bad (2008, five innings, five runs). Less reassuring is the fact that he's got a wider ERA split between NuYankee Stadium (4.31) and the road (3.27) over the past two years, but then the guy did pitch the ALCS and World Series clinchers at home last year, and things worked out all right.

The bottom line is that while the Yankees' rotation arrangement still isn't optimal, there's nothing glaringly wrong with it under the circumstances. And with both Hughes and Pettitte having gotten strong postseason starts under their belts already, Yankee fans can rest just a bit easier knowing that there are fewer question marks hanging in the balance this time around.