Share All sharing options for: Yankees vs. Rangers ALCS Breakdown: The Lineups 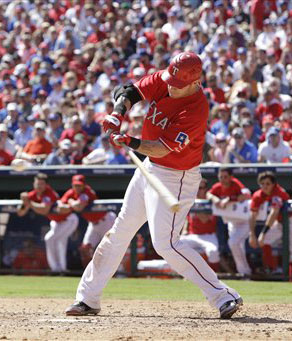 Josh Hamilton is in the Rangers' lineup, but is he healthy? (AP)

So, the Rangers finally won a postseason series, and they run right into the team that defeated them the other three times they made it to the playoffs. The Rangers won their first ever postseason game, beating David Cone and the Yankees 6-2 behind John Burkett back on October 1, 1996. The Yankees then won the Rangers next nine posteason contests, bouncing them from the ’96 ALDS and sweeping them in the ’98 and ’99 Division Series, allowing just two runs in those last six games. Those were different teams, of course, only the "core four" remain from the 1999 Yankees and the Rangers have turned over completely. In fact, I’m fairly certain that the only members of the Rangers’ 1999 ALDS roster that are still active with any major league team are catchers Ivan Rodriguez and Gregg Zaun. Still, that’s the history that the Rangers carry into this, their first ever American League Championship Series.

The Yankees and Rangers split eight games during the regular season this year, but those eight games aren’t terribly informative. Three of the Yankees’ wins came back in April in the Bronx, two of them in games started by Scott Feldman and Rich Harden, pitchers who didn’t even make the Rangers’ ALDS roster. The fourth Yankee win saw them score the go-ahead runs in their final at-bat, three of the Rangers’ wins were walk-offs, and the fourth Texas victory came in a game started by Dustin Moseley. In total, the Yankees led on runs 39-33, but you can pretty much throw out all eight of those games and just say that these teams are pretty well matched.

Here, then is the first part of my four-part head-to-head breakdown of the two teams in anticipation of Friday’s Game One. I’ve largely avoided repeating analysis of the Yankee hitters that I included in my breakdown of the ALDS lineups, but you can follow that link to revisit that material. Again, I’m using batting order rather than defensive positions to determine the head-to-head matchups and considering only offensive contributions from each player. I’ll compare the teams’ fielding in a subsequent post.

Andrus slugged .373 as a 20-year-old rookie in 2009 and .361 in four minor league seasons as a teenager, so while he’ll never be mistaken for Juan Gonzalez, he doesn’t completely lack power as his 2010 slugging percentage would suggest, and that lack of power is the only difference between his overall 2010 batting line and Jeter’s. Still, you can’t just write of 70 points of slugging. It’s also worth noting that Jeter looked like his old self against lefties this year, hitting.321/.393/.481, while Andrus’ lacked a meaningful platoon split. Given that both teams will start lefties in four games if the series goes a full seven, that’s not insignificant, and it doesn’t matter that one of those lefties is Cliff Lee. Jeter has hit .458/.519/.625 in 27 plate appearances against Lee over the past two seasons, 2009 World Series included.

This seems close until you look at what Granderson has done since Kevin Long rebuilt his swing, coincidentally during a trip to Arlington in early August. Including his MVP-worthy performance in the Division Series, Granderson has hit .271/.364/.571 with 14 home runs in 206 plate appearances since the fix and has proved to be just as dangerous against lefties and righties. Young, meanwhile, has hit just .244/.270/.360 since the end of July, including a 3-for-20 performance in the just-completed ALDS. Young also vanishes on the road, controversial Game Two homer in the ALDS aside, hitting just .260/.299/.380 outside of the Metroplex during the regular season. This isn’t close at all.

Given that Hamilton missed almost all of September, those counting stats aren’t as close as they appear. This is Hamilton in a slaughter. Or it is if you believe that Hamilton is completely healthy and the ALDS gave him enough plate appearances to shake off the rust from that lost month. Hamilton has hit just .172/.219/.276 in 32 plate appearances since returning to action and is hitless in his last 11 at-bats entering this series. Teixeira had injury issues of his own in September (a broken toe and strained thumb), but over his last 59 plate appearances (ALDS included) he has hit .300/.390/.600 with four home runs. Small sample issues obviously apply, but given the health concerns still surrounding Hamilton and the similarity of his and Teixeira’s career batting lines, I’m comfortable weighing those recent performances heavily relative to their season lines.

To watch them play, they seem like radically different players. Rodriguez is sleek and controlled, an athletic infielder. Guerrero is wild and unruly, now a hobbled designated hitter. However, similarities between the two abound, starting with the 2010 hitting stats. Both are 6-foot-3 and roughly 230 pounds. Both were born in 1975 to Dominican parents (Vlad is a little more than five months older). Both emerged in the late ‘90s as power and speed threats, rivals for the title of the best player in baseball not named Barry Bonds. Alex Rodriguez is one of four players to hit 40 home runs and steal 40 bases in a season, doing so in 1998. Guerrero fell one homer shy in 2002, when he hit 39 home runs and stole 40 bases, the closest anyone has come without eventually achieving the feat. Each stole just four bases in 2010. Both seemed like automatic Hall of Famers in their primes, though now some wonder if Rodriguez’s performance-enhancing drug use and what seemed like Guerrero’s early decline might keep both out.

Here’s another similarity: both did most of their hitting at home this year:

Given that the Ballpark in Arlington used to be Rodriguez’s home park and that he raked there this year, you might give him a slight edge on that front, but this is really about as even as things get. Both posted an OPS around .600 in the ALDS. Both are likely to do far more damage in this series.

With Hamilton scuffling, Cruz is the hitter that scares me most in the Rangers’ lineup. A variety of injuries limited Cruz to 108 games this year, which is why his counting stats don’t measure up, but he hit righties almost as well as lefties this year, and just hit .400 with three home runs and a .950 slugging percentage in the ALDS against the Rays. Cruz’s one weakness is that he hit just .267/.324/.480 on the road, but the Rangers have home-field advantage in this series, the Yankees play in a hitting-friendly ballpark, and Cruz got on just fine at Tropicana Field in the ALDS, going 6-for12 with a double and a home run. Also, Cruz’s weak road line leaves a .371/.423/.675 performance at home, and he homered in both of the Rangers ALDS games in Arlington. Be afraid.

Another Ranger who missed significant time due to injury this season, Kinsler had an odd season during which his power seemed to disappear. Kinsler hit 31 home runs in 2009 and slugged .517 in 2008, but this year he hit just nine home runs in 460 plate appearances and slugged .412, posting an isolated power (slugging minus batting average) of .125, way down from his previous career mark of .197. Then, in the ALDS, he cracked three home runs and slugged .944. What gives? It’s not as though Kinsler finished the year strong. He was most recently activated from the disabled list on September 3 and hit .253/.368/.394 with just three home runs over his final 27 games, his worst performance in any single month during the regular season. Kinsler hit far better against lefties and at home during the regular season, but his power numbers were roughly equivalent at home and on the road, and he actually hit all but one of his home runs off righties. Right now, Kinsler is a mystery, but one the Yankees would be foolish to underestimate. Swisher also had a solid ALDS, matching his 2009 postseason totals with a homer and a pair of doubles, hitting .333/.385/.750 with just one strikeout.

Molina hit .240/.279/.320 after being traded by the Giants to the Rangers for Chris Ray on July 1, looking more like his brother Jose at the plate. Like Kinsler, Molina has more power than that, and showed it with a home run off David Price in Game One of the ALDS (he hit .357 overall in the series). From 2003 to 2009, the eldest Molina slugged .441 and averaged 16 home runs a season. His isolated power over that span was .160. This year it was .077. Of course, he is a 35-year-old catcher, and it’s not uncommon for catchers to suddenly stop hitting around that age. Far less common is a 39-year-old backstop who can rake like Posada. Of course, Posada’s viability as a catcher is increasingly coming into question, in part due to a simple inability to hold up under the daily grind of the position, but with no more than three games in a row without an off-day, Jorge’s squattin’ pretty in the postseason.

I’ll confess to swapping Molina and the Rangers' outfield-platoon in the Rangers’ typical batting order to get an apples-to-apples comparison of the two platoons here. Those lines above are each players' overall season stats. If we limit them to the relevant platoon splits, we get this:

Combine those lines and you get this:

That’s pretty close, though Thamesman’s edge in on-base percentage is more important than the Francoeurphy’s edge in slugging. It’s also worth noting, with a massive sample-size caveat, that Mance went 4-for-11 with a pair of homers in the ALDS while Jeffid was just 2-for-15 with a double. I’ll take Thamesman’s superior secondary skills (.177 to .169 edge in isolated slugging, .105 to .068 edge in isolated discipline*)

One of the reasons the Rangers were willing to send 23-year-old first base prospect Justin Smoak to the Mariners for Cliff Lee was that they had the 24-year-old Moreland raking in Triple-A. Moreland is a career .313/.383/.509 hitter in the minors, so that batting line, compiled since making his major league debut on July 29, is for real, and perhaps a hint of bigger and better things to come. Indeed, Moreland hit .257/.379/.500 in September. Gardner is a very valuable player, but strip away his defense and consider his performance since being hit in the wrist by a Clayton Kershaw pitch (.232/.363/.340 plus 2-for-10 in the ALDS), and I’d much rather face him in a big spot than Moreland, even though the latter can be neutralized by lefty pitching at this early point in his major league career.

The Rangers have dangerous hitters throughout their lineup and showed in Game Five against the Rays that they are willing to force the action on the bases. That last is one of two important X-factors here. The Yankees were dead last in the majors at throwing out would-be base stealers this season, doing so at a pathetic 15 percent rate. A lot of that is on the pitchers, but it’s on the aging and often aching Posada as well. The Rangers, meanwhile, were sixth in the majors in stolen bases and stole three runs against David Price and the Rays last night with aggressive baserunning. That’s a bad combination for the Yankees. The other X-factor is Hamilton, who could very well find his stroke and dominate this series. The Rangers scored 5.31 runs per game at home this year despite their various injuries and power-outages. With their lineup back at full strength (or at least full attendance), they’re a very dangerous team to face, especially in Arlington, where this series will open. Still, the Yankee offense was clicking along very nicely in the ALDS and was the best in the majors during the regular season. With Granderson continuing to rake and Teixeira back in the groove, you still have to favor the Yankees in this department.

More tomorrow on the benches, defenses, and pitching.