Share All sharing options for: The Yankees Get the Rangers Now and the Rays Again Next Year 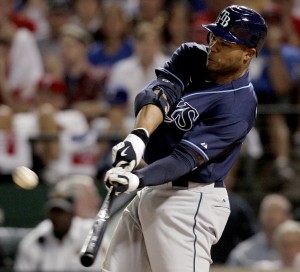 Carl Crawford in the ALDS: For want of this left fielder, the kingdom will not be lost. (AP)

The Rays didn't bow out of the postseason until Tuesday night, but the eulogies had long since begun. Many have interpreted Rays’ owner Stuart Sternberg’s vow that payroll will shrink in 2011 as a guarantee that the Rays’ run is over and a Marlins-style crash is in the works. The exact degree of the culling will determine whether just how badly the on-field results are affected, but if the Rays stay in the range of $50 million, they have the depth to compete. Given the identity of the departing players, the Rays might not be badly hurt at all.

Let’s start with the player that everyone will be focused on this winter, Carl Crawford. The 29-year-old is coming off a great year, probably the best of his career. I’ve written extensively about why I don’t think he’s a great risk going forward, so I’m not going to recapitulate those arguments here except to say that the Crawford the Rays had in 2010 is not the one they had in 2009 and probably wouldn’t have been the one they had in 2011. They’re not replacing this guy, but one who is a little bit worse. Top outfield prospect Desmond Jennings had a difficult year at Triple-A Durham, missing time with injuries and never quite getting his bat to where it was in 2009 (.318/.401/.487 split between Double- and Triple-A), but he remains a solid prospect. Jennings is a very similar player to Crawford, and if he plays up to expectations, he won’t replace his predecessor on a one-for-one basis, but it could be close.

Other free agents include first baseman Carlos Pena and bullpen members Joaquin Benoit, Randy Choate, Grant Balfour, Chad Qualls, and Rafael Soriano. Pena, 32, has power and will walk, but his declining batting averages have reduced his value to the point that he’s not a great bat for the position. He made just over $10 million this year, and it’s hard to see him commanding that kind of dough again this time around. The Rays might have a chance to sign him at a reduction, but if they don’t, a competitive replacement shouldn’t be impossible to find.

The relievers, particularly closer Soriano, are a tougher loss to swallow given the problems Tampa has had with bullpen construction over the years. The 2010 unit was the best in the American League, but it expired on Tuesday night. In addition to the four free agents, Dan Wheeler’s contract option is up (he’ll get either a $1 million buyout or a $4 million payday for next year), and both J.P. Howell (injured this year) and Lance Cormier are arbitration eligible, and the latter, at the very least, doesn’t pitch well enough to be worth the freight. The Rays pen that convenes in February won’t bear much resemblance to the one that walked off the field tonight.

Rebuilding the bullpen will be a tough nut for Andrew Friedman, but I don’t mean to be overly blasé about that when I say that bullpens come and bullpens go and the Rays have just as much of a chance of having a good one next year with a new cast as they do having it fall apart altogether—there is very little science in the collection of relievers.The Rays have pitchers in their system, including hard-throwing Tommy John recovery case Jake McGee (who can start but made it up to the pen this year) and can probably cobble something together out of minor leaguers and inexpensive free agents.

That leaves the arbitration-eligible players, whom the team might chose to non-tender rather than risk going to the mats. Jason Bartlett, B.J. Upton, and Matt Garza are due for insta-raises this winter. Reid Brignac, a better offensive and defensive player, can replace Bartlett without the team suffering at all. Losing Garza would hurt, but if the team can deal James Shields, that would leave some room to absorb his increased salary and slip the promising Jeremy Hellickson into the rotation. Failing that, Hellickson replaces Garza and the team prays for a Shields recovery.

Upton is the hardest player to figure. Now twenty-six, he had gone backwards since hitting .300/.386/.508 with 24 home runs as a 22-year-old. His concentration fluctuates and he doesn’t always hustle. Yet, by the standards of his position he’s not a bad player at all. The average center fielder hit .261/.326/.405 this year. Upton hit .237/.322/.424, spiking his numbers with 42 steals at a good percentage and good defense. Altogether, he was worth between four and five wins this year. Upton may be flawed, but you don’t dispense with that kind of player easily, or shouldn’t. Jennings can only replace one player, not two. Losing both Crawford and Upton could be a fatal blow to an offense that was already hard-pressed to play up to the team’s ambitions.

The Rays have a difficult winter ahead, but as long as they are smart, and perhaps a bit lucky, they can survive this. As long as Sternberg doesn’t order a pell-mell stripping of the roster, and there is no indication that he will, they have the resources to survive. They may very well compete again, but even if they don’t they will remain strong enough to be a major obstacle to the Yankees for the fourth year in a row.