The Rangers May Not Win, But They Deserve a Hug

Share All sharing options for: The Rangers May Not Win, But They Deserve a Hug 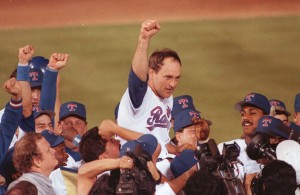 The Rangers got to celebrate Nolan Ryan's no-hitters, but not any kind of postseason success... Until now. (AP)

The Rangers have finally won a playoff series. The franchise, which began life in Washington in 1961, required 35 years to reach its first postseason and 49 years to win one. The Rangers were not quite as desperate for this moment as the Cubs are or the Red Sox and White Sox were, but they rank high on the futility list, an original expansion team that has never been able to put together all the elements of a great team. They have won 90 or more games just four times in their history, and never more than 95. They have lost 90 or more games 17 times, including six seasons of 100 or more losses. Going back to Washington, they have been run by feckless or insincere owners who viewed them more as a real estate investment than a baseball team. The club is overdue for its moment, but nevertheless it falls to the Yankees to kick them back to history’s curb.

For most of their history, the problem has been pitching. They have led the American League in runs allowed per game just once, in 1983. They had a strong rotation that year fronted by Charlie Hough and eventual AL ERA leader Rick Honeycutt, who, in a typical move, they traded to the Dodgers in August for future ace Dave Stewart, who they could do nothing with, and $200,000. That team didn’t go anywhere because it couldn’t hit, which has often been the case whenever the club put together any pitching. In 1978, the Rangers had a front four of Ferguson Jenkins, Jon Matlack, Doyle Alexander, and Doc Medich. They didn’t hit. The year before that, they had Bert Blyleven and Gaylord Perry as well as Alexander and Elllis. They didn’t hit.

More often, though, Rangers pitching has simply been weak. Their staff has ranked in the top five in runs allowed per game just 10 times. It has ranked 10th or lower 20 times, including six trips to dead last. The only pitchers to win 100 games in a Rangers uniform are Hough, Kenny Rogers, and Bobby Witt, and Witt wasn’t particularly good. Hall of Famers such as Jenkins, Perry, Blyleven (well, he should be one), and Nolan Ryan did well but spent their best years elsewhere. Even All-Star types like Matlack, Kevin Brown, Frank Tanana, and Joe Coleman left too soon or arrived too late to contribute to a great Rangers team. The greatest career closer in the history of the Rangers is no one. A number of excellent relievers passed through after their glory days were mostly through: Sparky Lyle, Goose Gossage, John Wetteland, Tom Henke, Eric Gagne, Mike Henneman, There are some decent years in that list, and some bad ones too. None stayed around long enough to serve as a building block for a championship-quality team.

It ranks as a near-miracle that this season wasn’t more of the same. Consider their opening rotation: Scott Feldman, last year’s fluke; Rich Harden, a periodically great pitcher with a fatal attraction to the disabled list; C.J. Wilson, a defrocked closer; Colby Lewis, a major league washout who had spent the previous two years pitching for the Hiroshima Carp; and 24-year-old lefty Matt Harrison, who had compiled a 5.76 ERA in 147 innings of major-league work. Feldman, Harden, and Harrison flopped, and even with the surprising performances of Wilson and Lewis, some solid September starts from sophomore Derek Holland, and the acquisition of Cliff Lee from Seattle, the rotation was never a great strength. What it was, somehow, was good enough when combined with an excellent bullpen which ranked as the second-best in the AL.

Anything could happen in the seven games between the Yankees and Rangers. Beginning today, we will start to run through the various head-to-head matchups and possible scenarios. Whatever the result of the coming series, the Rangers deserve recognition for their accomplishment. I haven’t scratched the surface of their mostly sordid history here, but almost as much as the Red Sox, the Rangers have had to overcome some of the worst, most clueless (intentionally or otherwise) ownership in the game’s history. Given that, that they have come as far as the second round of the playoffs is quite an accomplishment.