Share All sharing options for: Tilting Towards Tampa Bay?

With the Rangers and the Rays set to face off in St. Petersburg for Game Five tonight, we still don't know the identity of the Yankees' opponent in the American League Championship Series. Both teams present challenges for the Yanks; after all, the Rays finished with a 10-8 series advantage in the regular season, enough to give them one more win and thus home field advantage in a seven-game series, while the Rangers split eight games with the Yankees, taking a late-season sweep down in Texas which set the tone for the Bronx Bombers' September slog, inducing no small amount of anxiety. 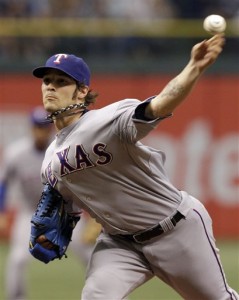 While David Price and Cliff Lee are no pushovers, C.J. Wilson presents as another tough southpaw the Yankees would have to face should Texas advance to the ALCS (AP).

Since so much of the Yankees' advantage in the Twins' series came down to favorable platoon matchups — given three switch-hitters, the Yankees were effectively able to stack their lineup with seven righties against the Twins' two southpaws, while the Twins could get no more than five righties into a lineup versus the Yanks' two southpaws and had their two best hitters neutralized under such circumstances — I decided to dig into the two potential opponents' various platoon splits, slicing and dicing the resulting number. The process was a bit more involved than a back-of-the-envelope calculation, but the results should probably be treated as such.

Rather than call upon the full team platoon splits, which can be misleading in a short series because they reflect players who may be buried on the bench or even no longer with the team, I considered both potential opponents' lineups against starters of either hand, basing them on lineups we've already seen under such circumstances in the postseason. Now, relying simply on one year of platoon splits for a given player is admittedly half-assed, since the varying results of a couple hundred plate appearances over the course of the year can deviate significantly from a larger sample. However, on a team level, those things are more likely to even out, and so long as we don't declare this the analysis to end all analysis, I think we're on solid enough ground.

First off, there's not a whole lot of difference between the two potential lineups once you take into account park effects:

OPS+ is a stat published at Baseball-Reference.com which expresses the combination of each team's on-base and slugging percentages relative to park-adjusted league averages in an index form, with 100 being average; the numbers above show the Rays as 20 percent better than league average against lefties, 15 percent better against righties.

The Rays offer significantly different looks depending upon pitcher handedness; against lefties, Jason Bartlett (.273/.355/.370 vs. lefties in 2010; all numbers here similarly are single-season splits) leads off, with number two hitter B.J. Upton (.278/.381/.538) and cleanup man Evan Longoria (.324/.411/.545) protecting the relatively overmatched Carl Crawford (.256/.312/.384). Curiously, manager Joe Maddon has Ben Zobrist (playing first here instead of Carlos Peña, who's absolutely pathetic against lefties) and DH Willy Aybar hitting ahead of Kelly Shoppach and Sean Rodriguez, both of whom were significantly more effective against southpaws in 2010 than the men ahead of them. Rookie Desmond Jennings, with all of 24 regular season major league plate appearances to his name, bats ninth.

For comparison's sake, here are the Yankees' and Twins' platoon-based numbers:

As you can see, while the Yankee lineup was equally suited to tackle lefties and righties, the Twins were at a slight disadvantage when facing southpaws, and it was one reason they fell to the Yanks. The Rays have a slight tilt of similar magnitude in the opposite direction against a Yankees club which would send CC Sabathia and Andy Pettitte to the hill twice — not a huge one, but not quite worth waving off. So on that front, the Rangers may be the preferable matchup, if only by a little.

Turning to the four-man rotations and weighting the respective pitchers' performances by the number of starts they would make in a seven-game series, the difference between the two clubs become a bit more clear:

The Rangers' starters were particularly tough against hitters of both hands, particularly after adjusting for the fact that they did so while playing in a hitter-friendly environment. Game One/Five starter C.J. Wilson is absolutely lethal against lefties (.144/.224/.176 without a single homer allowed in 171 PA) and while the Yankees can line up seven righties (including switch-hitters) against him and Game Three/Seven starter Cliff Lee, both are tough cookies from that side as well (.236/.333/.346, albeit with a high walk rate for Wilson, .227/.243/.348 for Lee). Game Two/Six starter Colby Lewis, a righty is unsurprisingly stronger versus righties (.216/.264/.363, compared to .239/.319/.374 with roughly one walk for every 10 PA). Righty Game Four starter Tommy Hunter is the weak link, as he's particularly vulnerable against lefties (.272/.326/.437), but he'll only start once.

The Rays came into the postseason with significant rotation concerns — not quite Yankee-level concerns, but not far off. The artist formerly known as "Big Game James" Shields may have been better off going by Palooka Jimmy, as his 5.18 ERA accompanied the league leads in hits, homers and earned runs allowed. Matt Garza had an ugly September (5.88 ERA) marked by three consecutive disaster starts against the Red Sox and Yankees. Jeff Niemann was pounded even more severely once returning from an August shoulder strain, more or less ruling him out for a start. The only starters firing on all cylinders at the moment are David Price, the sole southpaw among Maddon's options, and rookie Wade Davis.

Tampa Bay's starters are more vulnerable to hitters on both sides of the plate than Texas'. Price didn't allow a homer to lefties while holding them to a .211/.277/.291 line, but the other three starters yielded slugging percentages well above .400, with Shields (.458) and Davis (.444) both gaudy enough for concern. Those latter two and Garza all yielded OBPs well above .300 as well, with Garza and Davis walking hitters just under 10 percent of the time and Shields more unlucky on the hit front (.341 BABIP). As constituted for the ALCS, this unit sets up as three percent worse than league average against lefties.

They're only slightly better against righties. Price (.224/.302/.355) still rates as the strongest of the bunch despite the platoon disadvantage, and while the three righties aren't nearly as vulnerable to the walk as they are against the other hand — thus keeping the OBPs around .300 — their gopher tendencies are problematic enough to push the slugging percentages into the higher side (.426 for Garza, .421 for Davis, .529 for Shields — he actually showed a reverse platoon split).

As Steve pointed out yesterday, it's possible the Rays could bypass Shields in favor of Niemann, particularly given the latter's early hook in Game Two of the Division Series. Niemann was about 50 points of OPS better than Shields versus lefties, and a whopping 168 better against righties via a .239/.301/.397 line. Rerunning the numbers with him in place of Shields comes out to a 100 OPS+ versus lefties and a 92 OPS+ against righties.

Again, putting in some context for comparison, here are the Yankees and Twins based upon their initial plans, which included the latter offering up the eminently hittable Nick Blackburn in the Game Four that never arrived:

The Yankee rotation didn't show much of a tilt either way, but the Twins' unit was stronger against lefties — lefties whose footprint was minimized by the switch-hitting issue two times out of three.

So on paper, and without considering the impact of the bullpens (the top two in the league according to Baseball Prospectus' numbers) or lying awake at night worrying about the badass that is Cliff Lee, the matchups suggest the Rangers would make for the tougher opponent than the Rays, with the two teams' lineups essentially a push but Texas' rotation in much better shape than Tampa Bay's. There's one more consideration to throw into the mix which closes the gap between those two teams somewhat, but I'll save that until my next post. For right now, it's a daunting enough thought that the Rays might make for the more favorable matchup given how draining those late-season matches with Tampa Bay were for the Yankees even without a playoff spot on the line. Buckle up, it's going to be a wild ride.