Jesse Barfield on Bobby Cox (and Lou Piniella, Too)

Share All sharing options for: Jesse Barfield on Bobby Cox (and Lou Piniella, Too) 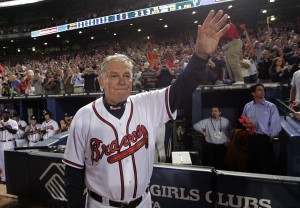 Back in July, we were already aware that this season would see several fixtures of the game depart the major-league scene. I used the occasion of running into former Yankee and Bobby Cox-era Blue Jay Jesse Barfield to discuss his experiences playing for Cox. Since Barfield also had a relationship with Lou Piniella (something I confess I wasn't thinking about until he brought it up), he was good enough to say a few words about him as well. With Cox, a former Yankee himself, having managed his final game last night, this seemed an appropriate opportunity to share some of that conversation. Just click on the link below to play, and don't mind the passing airplanes ("What the hell?" I thought. "This isn't Shea Stadium!").