Share All sharing options for: ALDS Game 3: George Should Have Seen Hughes Arrive 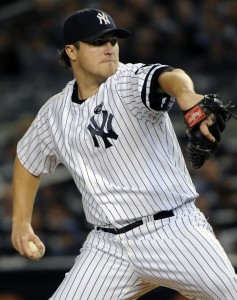 Phil Hughes vanquishing the Twins on Saturday night: All the effort paid off. (AP)

For the Yankees, Saturday night was the culmination of seven years’ investment of time and money in Phil Hughes. After four years of hints and injuries, of dominating and being dominated, Hughes gave the Yankees the kind of start that they always knew he was capable of. There were no sudden bouts of wildness, no home runs launched by Maicer Izturis or Kevin Cash (yes, both happened this year). Hughes’ home field disadvantage was invisible. There wasn’t even any fooling around with his changeup. It was just a straight-ahead strong start by a poised pitcher.

In the fifth inning, Delmon Young singled and Hughes, being careful, passed Jim Thome. It was his only walk of the game. He dispensed with Michael Cuddyer with some tough fastballs for the second out, then received a helpful popup from Danny Valencia. Hughes got in another spot of trouble in the sixth. He retired J.J. Hardy and Dernard Span, albeit on solidly hit balls. Orlando Hudson then got a ball just over Robinson Cano’s head into right field. Joe Mauer then chased him to second with another single that just evaded Cano’s glove.

With Jason Kubel coming to the plate, it would have been easy for Joe Girardi to go with his Coffee Joe instincts and reach into the bullpen for Boone Logan. Logan held left-handed hitters to .190/.286/.215 this year, while Kubel lugs around career percentages of .236/.313/.352 against southpaws. It’s a matchup that many managers would have gone for given the importance of the game, and no one would have second-guessed it. To his credit, Girardi never twitched, and Hughes made fast work of Kubel, picking up his sixth and final strikeout of the game. With Hughes’ pitch count still well under 100, Girardi even brought him back for another inning of work before turning the game over to the bullpen in the eighth.

Hughes earned the confidence, and the Yankees earned his having that confidence, by sticking with him from 2004 in the minors and 2007 in the majors until now. Hughes is still quite young. He won’t turn 25 until the end of next June. There are many pitchers his age still in the minors. There is a long line of Yankees decision-makers, starting with Brian Cashman, who deserve credit for not doing the easy thing, not doing what the Yankees did over and over and over again during George Steinbrenner’s ownership and deal him off for one veteran or another. Between Andy Pettitte and Phil Hughes just one home-grown pitcher became a rotation regular, Chien-Ming Wang. Youngsters were tried, albeit briefly. Some were tried and failed. Some broke down, which is a risk with all pitchers. Several more were traded.

With all due respect to pitchers such as Ian Kennedy, Tyler Clippard, and Jake Westbrook, who proved to be fine pitchers elsewhere, none had the raw stuff of Hughes, and perhaps that made the difference in Hughes’ staying or being packed off for some other organization’s Tom, Dick, or Johan. The passing of the torch in the owner’s suite also undoubtedly played a part, as George Steinbrenner never had the patience to watch a young pitcher take his lumps. Thus, after Yankees’ pitchers won the Cy Young award in 1977 and 1978, did two former Yankees properties win the award with other teams before the Yankees won another—23 years later. With Hughes, they finally accepted the pain and patience that comes with teaching, and Saturday night they collected the reward.