Share All sharing options for: Anatomy of an At-Bat: Marcus Thames' two-run homer

Lefty-killer Marcus Thames put the nail into the Twins' coffin with a fourth-inning opposite field blast that all but sealed the Yankees' ALDS sweep. It upped their chances of winning from 80% to 90%.

How did he do it?

1. It sure helped that Brian Duensing didn't execute his pitch. After Cano singled on a sinker with no outs, Duensing tryied to nip the outside corner with another sinker. Instead, it caught too much of the plate and Thames deposited it over the rightfield wall. 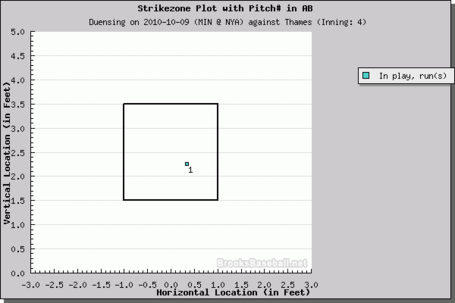 Thames swings at the first pitch 35% of the time, slightly higher than the league average of 28%. Duensing throws a first pitch strike 58% of the time, right in line with the ML average. This was basically Thames guessing a first-pitch fastball and getting one.

2. You can't blame Duensing for the decision to throw the pitch (only the execution), especially considering pitching Thames away is the smart move. He had exactly 0 opposite field home runs this year. All 12 of his long-balls were hit to leftfield.

3. It should be of note that Duensing retired Thames on an inside fastball in his first AB (Thames popped to SS) after throwing his best pitch, a slider, for a called strike. It's interesting that Duensing didn't go with either his best pitch or the pitch that had retired Thames previously. He was just trying to get ahead, and Thames didn't let him.

5. Several factors seemed to be in Duensing's favor tonight, and still he struggled. For one, Thames is actually hitting worst against LHP (.806 OPS) than RHP (.896) this season. Second, Thames has been a significantly better road hitter: .929 road OPS vs. .751 at home. Third, southpaw pitchers generally fare well at Yankee Stadium (at least compared to righties): .730 OPS Against LHP vs. .807 OPS Against RHP. Fourth, Duensing is adept at inducing groundballs (53% this year), something that would seem ideal for The Stadium, yet he allowed as many fly-outs as groundouts (four each). Why did he struggle when these factors looked be in his favor? No. 6 might be the answer.

6. Despite a pretty 2.62 ERA, Duensing got knocked around at the wrong time. His last three starts saw him compile a 6.11 ERA and walk as many as he K'ed (12). It seems the league either caught up to him and/or he tired down the stretch.

Either way, Marcus Thames ended any real chance Minnesota had at coming back. He might be a pivotal force in the ALCS considering the fine left-handed pitchers both the Rays and Rangers employ.