Replay, Replay, Hand Me Down A Solution

Share All sharing options for: Replay, Replay, Hand Me Down A Solution 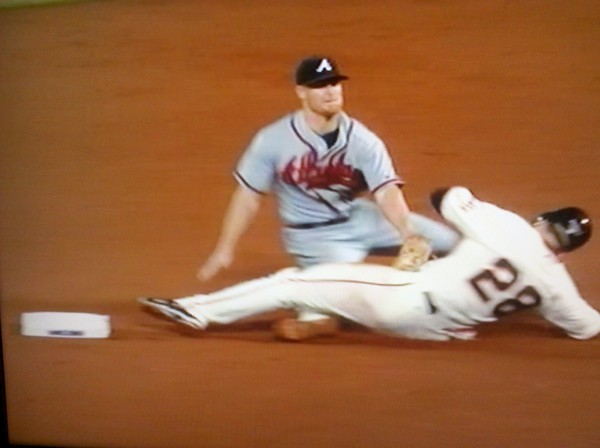 This runner was ruled safe.

There have been six postseason games played thus far this October and five of them have contained a controversial or flat-out incorrect umpiring decisions. The exception was Roy Halladay's no-hitter in Game One of the Phillies-Reds series, though there are those who have criticized home plate umpire John Hirschbeck's strike zone in that game, claiming, cynically, that Hirschbeck's generous zone was key to Halladay's accomplishment.

Such sour grapes aside, here's a look at the other five controversial calls with an eye toward how things might have played out differently if the umpires had been able to employ instant replay in an attempt to get the calls correct.

Game: ALDS Game One, Rangers @ Rays
Situation: 0-0, bottom 1st, bases loaded, one out, 2-1 count on Carlos Peña.
The Play: Peña checks his swing on a pitch high and inside.
The Call: Foul-tip, count 2-2.
The Umpire: Tim Welke, home plate

The Controversy: Peña said the ball hit him in the hand. The umpire said it hit the knob of his bat.

The Impact: Peña struck out three pitches later and Rocco Baldelli followed with a three-pitch strikeout stranding all three runners. If the call had been that Peña was indeed hit by the pitch, it would have forced in the first run of the game and left the bases loaded with just one out. Even if Baldelli still struck out, it would have brought Ben Zobrist, who doubled to lead off the bottom of the second, to the plate with the bases loaded and two outs.

The Replay: Inconclusive. Peña and Welke each thought the ball hit something, and the audio on the replay has a clear double-click sound, but without the audio I wouldn't be convinced the ball hit anything, never mind distinguishing between the knob of the bat and Peña's hand. I suppose you could argue that that the first click in that double-click sound sounded dull, like it had indeed hit Peña's hand, not the hard bat, but that's far from conclusive evidence of anything. I don't see how this play could have been overturned via replay.

Conclusion: One could argue that this was relatively harmless. Unless you're convinced that the ball really did hit Peña, and I'm not sure how you could be, this outcome was likely preferable to a hit-by-pitch call that would have forced in a run. The foul-tip call didn't end the at-bat, and it didn't result in an out or a run. It left the ultimate outcome in the hands of the players. Indeed, it took three more pitches before Peña's at bat produced an outcome. Replay would not have improved this situation.

The Controversy: If ruled a catch, the play would have ended the game.

The Impact: One extra pitch for Rivera.

The Replay: Conclusive. Goslon caught the ball before it hit the ground.

Conclusion: This was a clear case for replay. It would have taken the umpires, or an "eye-in-the-sky" ump, mere seconds to see that Golson caught the ball, and that would have ended the game. Instead, the blown call brought Jim Thome to the plate representing the tying run when the game should have been over. That could have been disastrous. Less disastrous, but still problematic, would have been if Rivera's pitch count was significantly extended due to the blown call, potentially effecting either his availability or effectiveness in Game Two. As it turned out, the impact of the blown call was minimal. Jim Thome popped out on the very next pitch to end the game, much to the relief of both the Yankees and the umpiring crew.

Also worth noting, the umpires all got together to discuss this play after the Yankees argued the call. Viewing a replay wouldn't have taken any more time than the umpires already took, and it would have produced an accurate result.

Game: ALDS Game Two, Rangers @ Rays
Situation: 2-0 Rangers, top 5th, men on first and second, one out, 2-2 count on Michael Young.
The Play: Young checks his swing on a pitch outside the strike zone.
The Call: No swing. Ball three. Full count.
The Umpire: Jerry Meals, first base

The Controversy: The Rays thought Young's swing went too far and that he should have struck out on the pitch.

The Impact: Young hit a three-run homer on the very next pitch, after which Joe Maddon went out to protest and was ejected from the game. However, the Rangers shut out the Rays and didn't need the three runs that scored on Young's homer to win the game.

The Replay: Young did appear to go around, his bat coming even with the right-field foul line at the most advanced portion of his swing. The problem is that a "swing" is not defined in the major league rule book. All the rule book says (in Rule 2.0) is that one of the definitions of a strike is a pitch which "is struck at by the batter and missed." It's entirely up to the umpires to determine whether or not a batter "struck at" a pitch. Lacking a more explicit definition, the only measure is a subjective one, so replay would not apply here.

Conclusion: Clearly a check-swing rule needs to be written with a clear definition of what is and what isn't a swing. Still, even if one is created, replaying check swings seems to fall under the heading of replaying balls and strikes, which simply isn't logistically feasible. There are too many of each in a game, the majority of the which could be considered borderline calls.

As with the Peña foul-tip in the previous game, the ruling on the field did not result in a run or an out or decide the outcome of the at-bat. It thus left it to the players to determine the outcome of the at-bat. I find that far less problematic than the opposite call, a third strike call on a properly checked swing that would have ended an at-bat that should have continued.

The Controversy: The pitch clearly caught the inside corner of the plate and should have been called strike three.

The Impact: Berkman doubled on the next pitch, scoring Posada with the go-ahead run, then came around to score two batters later. The Yankees scored three runs in the inning in total, all coming with none out (or what would have been one out had Berkman struck out). The Yankees ultimately won the game 5-2, making the two runs Berkman was involved in in the inning irrelevant to the result of the game, though his double was clearly the key hit in the inning and it's easy to argue that the game could have played out differently if the Yankees had scored just one in that inning.

The Replay: It was a strike.

Conclusion: Again, replaying balls and strikes isn't going to happen. There are too many close calls. Also, for what it's worth, the call was consistent with how Wendelstedt had been calling the strikezone all evening, shifting it toward the right-handed batters box with lefties such as Berkman at-bat, not that I approve of such things. Berkman said as much after the game:

The only solution here would be to have something like Pitchf/x automatically call every ball and strike. Given the battle ahead for expanded replay of any kind, I simply don't see that day coming any time soon. 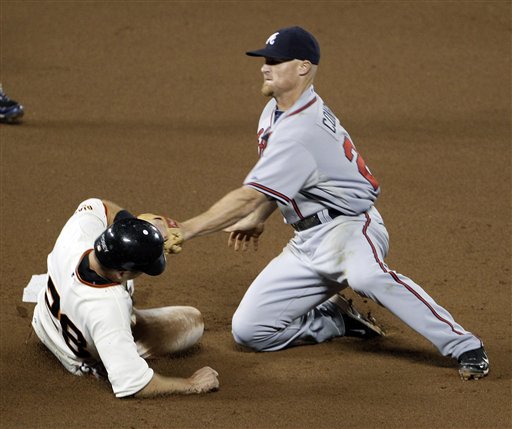 This is a closer approximation of how second-base umpire Paul Emmel saw the play from his position the infield grass toward the first base side of second. (AP)

The Controversy: Late-arriving. No one protested and the TBS announcers didn't mention anything, but Posey was clearly out.

The Impact: Pat Burrell struck out as Posey took second. Those should have been the first two outs of the inning and Jose Uribe's subsequent strikeout should have ended the inning with no men on base. Instead, Posey remained on second and the inning continued. Ultimately, Cody Ross singled Posey home with two outs with what proved to be the only run of the Giants' 1-0 win.

The Replay: Definitive: out.

Conclusion: There's no gray area on this one. This was a blown call that decided the game. Replay could have fixed it instantly. The only thing you can say is that the Braves didn't protest, so perhaps replay wouldn't have been used, but one hopes that an eye-in-the-sky umpire would have interjected before the game continued given the time available to watch the replay following Burrell's strikeout. The irony here being that it would have been a shame for the Giants to lose this game in extra innings after Tim Lincecum dominated the Braves for nine, but at least it would have been fair.