Minor League Ramble: Some Surprises of the Season

Share All sharing options for: Minor League Ramble: Some Surprises of the Season 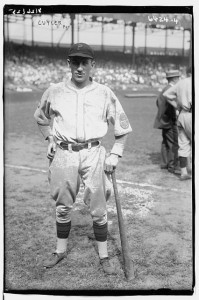 Will any of these prospects be as good as randomly-selected Hall of Famer Kiki Cuyler? (Library of Congress)

Brad Suttle, 3B, High-A Tampa: One of the most polished hitters the Yankees drafted in 2007, Suttle showed glimpses of promise while playing in Charleston in 2008, but has never stayed on the field long enough to realize his potential. A Type One diabetic, Suttle battled through hip injuries in ’08, while two right shoulder surgeries knocked him out for the season in ‘09.

Finally healthy, Suttle had a pedestrian April and May, but as the weather heated up in June, so too did his bat. In June and July, the switch-hitter hit a combined .273/.328/.405, but his best month was August; he bopped to the tune of a .336/.430/.589 slash. What’s most noticeable about his August line is the slugging percentage; always among the best pure hitters in the system with power potential, Suttle finally translated potential into a punchy performance. His overall line sat at .272/.340/.411.

It’s wonderful to see Suttle survive a season without injury; that’s the first key to his getting back on the prospect lists. This season makes for a foundation, but there are some holes in his game. The Texan struck out at a 26.5 percent clip—not a morbidly high rate, but certainly enough to show he could use some seasoning and patience. He does have good discipline, though, and is willing to take a walk. It was also his age-24 season, making him old for a prospect in High-A ball. Sure, that’s out of his control, but it also shows he could have been feasting on the younger, inexperienced players (despite being somewhat inexperienced at the pro level himself).

Chance of a Repeat: It all depends on his ability to stay healthy.

Melky Mesa, OF, High-A Tampa: Signed by the Yankees as an international free agent in 2003, Mesa was always a toolsy guy who couldn’t put it together. He spent two years in the Gulf Coast League and looked dreadful, and he didn’t look a whole lot better after a year in Staten Island. Perhaps Charleston held a magic lumber shed for power, because Mesa finally displayed some major power potential, mashing 20 homers in 497 at-bats. That was about all the contact he could make, though; his .225 batting average and .309 on-base percentage didn’t exactly scream awesomeness, and his 33.8 K% was far too high.

The Dominican cut back his whiff rate to 28.9 percent in 2010, which still isn’t great, but is a sign of progress. What’s more exciting is that Mesa emerged from a season in Florida as a more complete player. This year, after putting up numbers similar to his career rates in the season’s first two months, Mesa finally started getting some balls to drop in for hits, putting up a .260/.338/.475 triple slash and swiping 31 bases. He showed the ability to bomb the ball, with 14 jacks after the All-Star break and 19 on the year. Tampa is not the easiest place for a power hitter, but Mesa actually put up better numbers at home than on the road.

New York now has another name to consider for the 40-man roster when Rule 5 season comes around. Though Mesa probably won’t get protected—he still needs a lot of seasoning—teams may take a flier because of his enticing power potential. Southpaws easily exploit Mesa, though he can still get around on the ball against them. Mesa is 23, so in 2011, he’ll have to prove that he isn’t a one-year wonder playing against younger prospects and that he has actually turned a corner.

Chance of a Repeat: Unlike Suttle, Mesa does not have the injury excuse to fall back on. This is truly his first year of looking like a ballplayer. The power is legit, and though Baseball Prospectus’ minor league translations peg Mesa for a .298 True Average, I’m skeptical.

Colin Curtis, OF, Triple-A Scranton: Always a bit of a tweener—not hitting for average or much power, not getting on base often enough—Curtis was sent to the Arizona Fall League in 2009 so the Yankees could decide if they wanted to add him to the 40-man roster for the Rule 5 draft. Despite his fireworks display in the hitter’s league, the Bombers decided to leave him unprotected. He went undrafted.

The adjustments Curtis made in the AFL carried over into the regular season, and he carried a .339/.435/.441 in April. His season hit a speed bump at the end of the month when he suffered a high ankle sprain during a botched steal attempt. On the shelf for a month, Curtis looked rusty upon his return, but the Yankees needed some extra bats for interleague play, so he got his first big-league call. After he rode the pine for much of July, the Yankees sent him down to Scranton to get some regular playing time.

Back in the thick of a pennant race for Triple-A, Curtis started smoking the ball, bopping four homers in August—impressive, considering he is not much of a home-run threat. When Scranton was bounced from the playoffs, he returned to New York for the remainder of the season but failed to collect a base knock in 16 trips to the dish. He’s not going to be a starting outfielder on a big-league team, but Curtis is now a useful fourth outfielder who won’t be particularly sluggy, but should be able to grind out some ABs and fill in on defense as needed.

Chance of a Repeat: Very good. Curtis doesn’t have a whole lot of room to grow and doesn’t have a huge well of potential to tap like Suttle and Mesa, but he should be able to maintain the numbers he put up this year.

Marcos Vechionacci, 1B, Double-A Trenton: Perhaps the most tantalizing and frustrating of the surprise performers, Vechionacci had a breakthrough year at Double-A with a .283/.350/.421 slash. That’s a happy line, no? If only it had come two or three years earlier.

Vechionacci first arrived in New Jersey in 2007 after a rollercoaster journey through the lower levels. It was a two-game cameo, but he was assigned to Trenton for the 2008 campaign as a fresh-faced 21-year-old. An injured quad muscle popped him on the disabled list in April, and he didn’t heal up until August, abbreviating his first stint in Double-A. Fully recovered in 2009, the Venezuelan was… well, there’s no skirting it: dreadful. With a .213/.278/.332 slash, it looked as though the guy the Yankees had signed in 2002 as an international free agent had washed out; he had already slipped out of the prospect lists that he used to headline.

With a mediocre start of the season, it seemed like it was the same old, but a monster .397/.494/.559 June helped his rates soar (and padded them for the end of the season). Vechionacci has some oomph in his bat and is capable of driving the ball, though his overall rates are not as impressive when you look at him being a 24-year-old in Double-A. If he doesn’t decide to sign elsewhere over the winter, the Yankees will probably send him up to Scranton. This year was progress, but I’m not buying in. To even become a blip on the prospect radar again, Vechionacci is going to have to prove 2010 wasn’t a one-year fluke.

Chance of a Repeat: One good season out of many, a renewed prospect does not make. You can’t ignore Vechionacci’s past performances, and his age and level are two strikes against him.