There Used to Be a Ballpark

Share All sharing options for: There Used to Be a Ballpark

With the end-of-season and beginning-of-postseason scramble, I've been remiss in calling attention to something that while slightly off-topic should interest fellow Yankee fans, particularly ones in the local area. 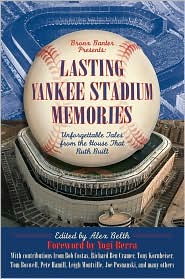 Over two years ago, as the end of Yankee Stadium — The House that Ruth Built, not the House That Ruthlessness Built Across the Street — drew nigh, Bronx Banter blogger Alex Belth asked various baseball writers to participate in a series of reminiscences regarding the grand old cathedral. Steve, Cliff (who was then Alex's partner in crime at Bronx Banter) and I all participated in the series, as did a host of other Banter contributors, bloggers and Baseball Prospectus colleagues. The well-connected Belth wrangled many writers of national stature — Allen Barra, Bob Costas, Joe Posnanski, Ken Rosenthal, Bob Klapisch, Jane Leavy, Pat Jordan, Rob Neyer and more — to submit pieces as well. The fruits of those writers' labors were published at the website over the fall and early winter of 2008.

The series had barely ended when readers learned of the tragic death of Banter contributor Todd Drew, taken at age 41 after a battle with cancer. Alex resolved to pay tribute to his fallen colleague when Skyhorse Publishing approached him about compiling those pieces into a book. Whittling some names away to make room for even more heavy hitters — Tom Boswell, Richard Ben Cramer, Tony Kornheiser, Leigh Montville, Charles Pierce, Steve Rushin, John Schulian and others — and remixing some of the previous pieces to cut to the damn chase already, the result, Lasting Yankee Stadium Memories: Unforgettable Tales from the House That Ruth Built, is now on bookshelves and available through Amazon, Barnes and Noble, and other retailers. Sixty contributors in all are in its pages (including myself and my aforementioned fellow Bible Study Groupers), with Alex and five others offering early takes on the new Yankee Stadium III to draw contrast with the old ballpark. Not all the writers love the Yankees; Kornheiser, Red Sox fan Pierce, Tribe fan Scott Raab, Expos fan Jonah Keri, and Mets fan Ted Berg provide necessary tonics to the love-fest, as do others. Even among the Yankee fans, not all of the memories are happy ones; Banterer Emma Span's hilariously blue account of the "Bloody Sock" game shows that laughter is indeed the best medicine for healing some of the scars of 2004. As if the project needed a stamp of authenticity, none other than Yogi Berra provides the Foreward. "I've got so many that I've forgotten some," wrote the sage backstop after taking the fork in the road.

With the Yankees' second playoff game cruelly scheduled for a 6:07 PM start on Thursday night, Alex will be reading from the book at Gelf Magazine's monthly "Varsity Letters" series in Brooklyn; he goes on at 7:40 or so. If you can set your DVRs to capture the start of the game, here are the details:

Sez Alex, "I know there’s a game tonight but if you can make it, love to see ya. If not, don’t stress it, and be sure to put all sorts of mojos on Carl Pavano for me." If you can't make it, do at least read the great Q&As at Gelf and New York Magazine and the New York Journal of Books review by Dorothy Seymour Mills, one of baseball's most foremost historians, and check back here sometime later this month for more about this book.