Get Your Rage On: Yanks vs. Ex-Yanks in the Postseason

Share All sharing options for: Get Your Rage On: Yanks vs. Ex-Yanks in the Postseason

With Carl Pavano heading to the hill for the Twins on Thursday night, many a Yankee fan's blood is already boiling at the memory of the lanky 34-year-old righty's unhappy time in the Bronx. The $39.95 million man, who earned the nickname of "American Idle" for making just 26 starts over the course of his 2005-2008 deal while showing a preternatural ability to get hurt, did face the Yankees in last year's Division Series finale but went down in defeat. 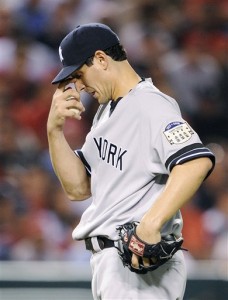 Can Carl Pavano make Yankee fans dislike him more than they already do given his ugly four-year stint in the Bronx? (AP)

How have other notable ex-Yankee hurlers fared against their former teams in recent postseasons, and how much anger did those battles stoke? Let's have a stroll down memory lane...

Drafted by the Yankees in the second round in 1984 but traded to Toronto when he was just 23, Leiter had already pitched in two World Series (for the Blue Jays in 1993 after years of arm injuries and minor league service, then for the Marlins in 1997) by the time he resurfaced as the ace of the Mets in the Subway Series. Whatever anger Yankee fans may have had for him had more to do with his being a member of the crosstown rivals than it did his getting shipped out in exchange for Jesse Barfield. Leiter started Games One and Five in the Series, pitching well but receiving a dearth of support from his teammates. He yielded two runs in seven innings in Game One, departing with a 3-2 lead only to watch Paul O'Neill's 10-pitch walk kick off a game-tying ninth-inning rally and Jose Vizcaino's two-out RBI single end the affair in the 12th. In Game Five, with the Mets facing elimination, he took to the mound and carried a 2-2 tie into the ninth. After whiffing both Tino Martinez and O'Neill, he walked Jorge Posada on nine pitches as his pitch count passed 130. Manager Bobby Valentine failed to take the hint, and watched Scott Brosius and Luis Sojo both single to score a pair of runs before giving Leiter the hook. Too late; Mariano Rivera shut the door in the bottom of the inning, and the Yanks were World Champions. Leiter would ultimately return to the Yankee fold in late 2005, and joined the YES booth as a color commentator upon retiring the following year.

The mainstay righty setup man earned four World Series rings after coming over from the Mariners along with Tino Martinez and Jim Mecir for Russ Davis and Sterling Hitchcock in December 1995 — one of the cornerstone deals to build the Joe Torre dynasty. Yet when he became a free agent, Nelson alit for the Pacific Northwest again amid rumors that he didn't get along with Torre, signing a three-year, $10.6 million deal which didn't go too badly for him; after being part of the Yankees' 114-win team in 1998, he joined the ride for the Mariners' 116-win team that first year. He didn't see much action in the ALCS, throwing two-thirds of an inning at the end of Game Two in a losing cause, then stranding two runners and getting five outs in Game Four, another loss. By 2003, he was back in pinstripes, welcomed back with open arms if only because it meant the departure of Armando Benitez.

The Yankees were merely the second of a record-setting 12 teams for whom the well-traveled Morgan pitched, and it was 19 years later when he faced them again in the World Series. Morgan pitched scoreless relief in Games One, Three and Five, with the latter the most notable; he came on in the ninth inning to replace Byung-Hyun Kim, who had just allowed Scott Brosius' game-tying homer less than 24 hours after serving up a game-winning shot to Mr. November, Derek Jeter. Morgan retired Alfonso Soriano to end the ninth, then pitched the 10th and 11th before yielding to Albie Lopez, against whom the Yankees rallied to send the series back to Arizona. Morgan didn't pitch again in the series, but we all know what happened.

A valuable swingman for the Yankees during the Torre dynasty, Mendoza was welcomed with open arms by young Red Sox GM Theo Epstein when he signed a two-year, $6.5 million deal with Boston on December 30, 2002: "'I think he is the last piece of the puzzle for the bullpen," said Epstein. Mendoza rewarded that misguided faith with a 6.75 ERA in 2003 as part of a notorious closer-by-committee scheme (see the Steve Goldman-edited Mind Game for more on that topic), but rebounded to pitch effectively enough to make the postseason roster in 2004. He tossed single innings in Games One and Three, both Yankee wins in which the Sox starters were bombed early; the Red Sox would mount their memorable comeback behind more effective pitchers.

The Gambler didn't take to New York, and he became infamous during the team's 1996 title run when he lasted just a combined seven innings over three postseason starts in three rounds; the Yankees won all three games despite his surrendering 11 runs in that limited duty. Traded to the A's after the 1997 season in a deal that brought back 1998 World Series MVP Scott Brosius, he bounced around, first to the Mets, then to the Rangers (his second stint with them) and then over to the Twins, for whom he went 13-8 with a swollen 4.57 ERA in 2003. Manager Ron Gardenhire chose to start Johan Santana, Brad Radke and Kyle Lohse ahead of him; Rogers merely provided just 1.1 innings of scoreless relief in the Twins' Game Three loss. One more Texas stint and a punched cameraman later, he re-emerged as the elder statesman and black arts practitioner of the 2006 Tigers, throwing 7.2 innings of shutout ball in Game Three before yielding to Joel Zumaya and Todd Jones. The Yanks were eliminated the next night, while Rogers went on to toss two more scoreless starts (a total of 23 scoreless innings) despite getting caught brown-handed; for Yankee fans, it had to come with a bit of satisfaction that Detroit ultimately came up short in the World Series against the Cardinals.

A first-round pick by the Rockies who passed through Montreal before joining the Yankee system in a deal which sent Hideki Irabu on the outbound, Westbrook made just a brief audition in the Bronx before being included in a trade which brought back slugger David Justice. Seven years later and still with the Indians, he started Game Three of the Division Series and was hit hard in a loss that kept the Yankees from being eliminated. They would ultimately be engulfed by a swarm of midges the next night.

As noted above, with the Twins down 2-0 and facing elimination, Pavano — who had begun the year with the Indians before being sent to Minnesota in an August waiver deal, winning 14 games between the two teams but compiling a gaudy 5.10 ERA — pitched Game Three. And pitched well, striking out eight and holding the Yankees scoreless through six innings before Alex Rodriguez and Jorge Posada connected for homers in the seventh to erase the Twins' 1-0 lead. The Yanks scored two more times in the ninth to send the Twins to their long winter's nap.

While the Yankees can't eliminate the Twins on Thursday night, they can hope for more of the same against the newly mustachioed Pavano, who enjoyed a much stronger year by going 17-11 with a 3.75 ERA.

Dedicated to Alex Belth and Emma Span, two Yankee fans who can't complete a sentence without a four-letter word when Pavano's name comes up.