Game 1: Letting the Piper Call the Tune in Minnesota

Share All sharing options for: Game 1: Letting the Piper Call the Tune in Minnesota 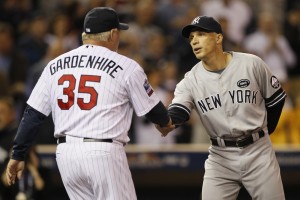 Ron Gardenhire and Joe Giardi before Game 1: He who hesitates is lost. (AP)

My Baseball Prospectus colleagues and I spent about 11 hours chatting through three baseball games. As the top of the sixth inning began to turn for the Yankees, we noted Francisco Liriano’s sudden loss of command after he had baffled the Yankees for five innings. The question soon became, "When will Ron Gardenhire pull him?"

As we now know, Gardenhire waited at least one batter too long, hanging fire until Curtis Granderson hit a long blast to right field that probably would have been about 10 rows deep at Yankee Stadium. It was only then that he yanked Liriano’s chord out of the socket and dragged Jose Mijares in from the bullpen. I asked Kevin Goldstein if he faulted Gardenhire for not being quicker to make a move.

Goldstein replied, "Personally, I think it was one batter too long, but leaving him in against Granderson at least had matchup logic." My response, informed by years of having Casey Stengel living in my brain, was to deny that Gardenhire had thought the matter through properly. Sure, he had left Liriano in the game to get the lefty-on-lefty advantage against Granderson, normally a good idea, but Liriano was done. "You'd rather have a live righty face Granderson," I said, "than a dying lefty, whatever the platoon stats."

Goldstein agreed, but said that that isn’t how managers think: "Managers have an ideal bullpen flow in mind before each game (see Padres), and they can get caught up in not straying from it. No flow for the Twins has fat lefty [Mijares] being first [out of the pen] when non-fat lefty [Liriano] is starting."

Goldstein was probably correct. The problem is, for the manager, that’s not being a thinking, flexible, creative coach, it’s being an automaton, a slave to a battle plan. As Helmuth Von Moltke famously said, no battle plan survives contact with the enemy. It’s great to have plans, but the battle, the game itself, presents problems you could not have anticipated. At that point, you have to improvise. In this case, it meant fetching a lefty who wasn’t gassed out of the bullpen even though another lefty was already in the game. 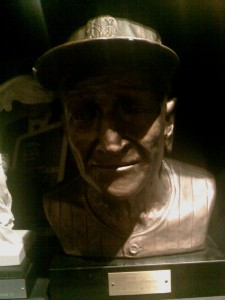 Casey Stengel: As George Harrison sang, "You said it all, though not many had ears." (Author's Collection)

Casey Stengel talked about this. He loved to platoon, but he also knew, as he said, that "People alter percentages." Sometimes a manager has to stop worrying about matchups and just do what he has to do to get out of an inning. "If [the opposition has] a right-handed hitter who can’t hit an overhanded curve ball [at bat], and you’ve got a right-handed pitcher in there who hasn’t got an overhand curve," he said, "Don’t you think you might be better off with a left-hander who has?"

This is what Gardenhire didn’t think of in the sixth inning. The Yankees showed they couldn’t hit Liriano at his best, but now he was laboring and they were hitting him just fine. Paraphrasing Casey, wouldn’t the Twins have been better off with a lefty who wasn’t tired? Gardenhire wasn’t thinking in that direction. Here’s what he said: "I think Liriano deserved the chance to get Granderson out. He hits like .180 off him. You take your starter out in a situation like that, it’s not the right thing to do."

First, if the pitcher is done, he’s done. Liriano was pretty obviously done. Second, Gardenhire’s scouting reports should have told him that Granderson’s .180 (it was actually .182) was compiled using his old-school batting stance, not his new, lefty-hurting stance. He might have also considered that after 105 pitches, Liriano might not have been the same pitcher that had so dominated Granderson.

Christina Kahrl made a very good observation about the reasoning through which Gardenhire had failed his team: "There are times when it seems as if data overload is getting in the way of watching what's going wrong in individual batter/pitch sequences. The batters let you know when a pitcher's done, in essence." In other words, you don’t pull a pitcher when the pitcher is done, and you don’t leave him in when he’s still good to go. Instead, you look at who is coming up and you desperately, desperately try to shave 10 points off of his batting average by controlling for the platoon matchup. It is an idiotic way of doing things, it doesn’t work, as it didn’t work tonight, it brings a succession of ever-weaker pitchers into the game, clogs rosters, extends game times, and, thankfully for the Yankees, is the undoing of teams like the Twins.

A few other observations: