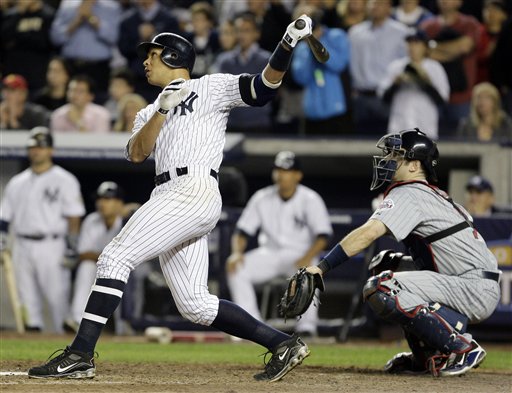 Alex Rodriguez dominates the top moments in Yankees-Twins ALDS history, including this one from Game Two of the 2009 series. (AP)

Tonight the Yankees and Twins open the fourth Division Series between the two teams in the last eight years, so I thought it might be fun to take a quick look back at some of the top moments from the first three. The Yankees have won each of the prior three Division Series against the Twins. In both 2003 and 2004, the Yankees took the series three games to one, their lone loss each time coming at home in Game One in a game started by Johan Santana and Mike Mussina (incidentally, those were the only two games of the 11 in this matchup which I attended). Last year, they swept the Twins on their way to their 27th World Championship. Here, then, are the top five moments from those three series, or rather the last two. You'll note there's nothing here from the 2003 series. That series was a snooze. After the Yankees dropped Game One 3-1, their lone run coming in the bottom of the ninth, they won the next three by a combined score of 15-3. Zzzzzzz. These five moments were much more compelling:

5) Game Three, 2009: the final major league baseball game at the Hubert H. Humphrey Metrodome. The game itself was nothing special. A pitchers duel between Carl Pavano and Andy Pettitte, who will rematch in Game Two of this year's series, yielded to a 4-1 Yankee win in the late innings. The penultimate game at the Homer Dome, the 12-inning one-game playoff against the Tigers to decide the Central, was infinitely more compelling. Still, this game was memorable for Twins fans, I'm sure. Meanwhile, tonight's game will be the first playoff game ever played at the dome's replacement, Target Field.

4) Game Four, 2004: Ruben Sierra's game-tying home run. The 2004 series was the most closely contested of the three in the books, as these middle three moments will show. In Game Four, Javier Vazquez put the Yankees in an early 5-1 hole, but Twins' starter Johan Santana had to leave the game early because of an injury, and the Yankees came back against reliever Juan Rincon in the eighth, the big hit being Sierra's three-run home-run to right-center which knotted the game at 5-5.

3) Game Two, 2004: Alex Rodriguez's game-tying ground-rule double. The Yankees had a 5-3 lead in the eighth inning of Game Two, but after Tom Gordon got two outs and allowed a single, Mariano Rivera came on and gave up an RBI single to Justin Morneau and a game-tying ground-rule double to Corey Koskie. The game remained tied at 5-5 until the 12th inning, when Torii Hunter hit a solo homer off Tanyon Sturtze. That brought Twins' closer Joe Nathan into the game in the bottom of the 12th, but after striking out John Olerud, he walked Miguel Cairo and Derek Jeter to put the winning runs on base, and Alex Rodriguez followed by crushing a ground-rule double into the left-center-field gap that tied the game at 6-6 and pushed Jeter to third, setting up a walk-off sac fly by Hideki Matsui off lefty J.C. Romero.

2) Game Four, 2004: Alex Rodriguez creates the series winning-run out of nothing. After Sierra's game-tying home run, Game Four remained tied into the 11th inning when, with one out and deposed starter Kyle Lohse on the mound, Alex Rodriguez shot a double down the left field line, stole third, then scored what proved to be the series-winning run on a wild pitch with Gary Sheffield at the plate. Mariano Rivera worked a 1-2-3 bottom of the 11th and, well, best I can recall the Yankee postseason ended at that point.

There's that name again. I wonder if any Twins fans ever bought into the "A-Rod is a choker" nonsense. I doubt it. This game was tied 1-1 heading into the eighth, but Phil Hughes and Mariano Rivera combined to allow two Twins runs in that frame (both charged to Hughes), handing a 3-1 lead to Joe Nathan. Mark Teixeira greeted the Twins' closer with a single, then Alex Rodriguez tied the game with an opposite field homer, the first of many big hits in his redemptive championship run. The Yankees got pinch-runner Brett Gardner to third with one out in the bottom of the tenth, but he was doubled off on a line-drive double-play that ended the threat. The Twins then loaded the bases against Damaso Marte and David Robertson in the top of the 11th only to watch Robertson wiggle out of the jam thanks to some handy glovework by Teixeira. Teixeira then led off the bottom of the 11th, batting right-handed against lefty Jose Mijares. He worked the count to 2-1, then hit a frozen rope home run just over the left field wall to win the game and put the Yankees up 2-0 in the series. It was later reported that Teixeira's game-winning laser left the field of play faster than any other home run hit in 2009.