While Steve and Cliff have been keeping you entertained here with their takes on the Yankees-Twins matchup, I delivered my own epic tome to Baseball Prospectus yesterday, breaking down the series along the lines of lineups, benches, rotations, bullpens, defenses and managers. More than any articles I do during the regular season, I love doing the Playoff Prospectus. Some folks may only care about the predictions at the ends of those monster pieces, but while any boob can tell you "Yankees in four," it takes far more to be entertaining and informative over the course of three or four thousand words BP dishes out the Playoff Prospecti as plum assignments, and I've always taken the honor seriously; last year, I even got to do the World Series Prospectus, and it was as cool as having a ticket to a game (which luckily I also did). In any event, while I've broken into minutiae there, I wanted to step back to highlight a few key points here.

1. The Aces: Just after my preview went up, the Yankees leaked the news that they would go with a three-man rotation for the division series, skipping the erratic (but gracious) A.J. Burnett to bring CC Sabathia on three days' rest. That's something the big man has done very well in the past, going 4-1 with a 1.52 ERA in six starts. He carried the 2008 Brewers to their first postseason berth in 26 years doing so, then helped the Yankees win their ring by making short-rest starts in both the ALCS and the World Series. 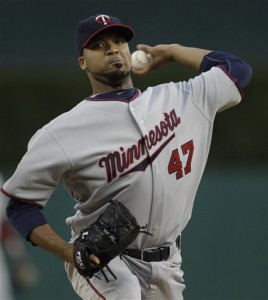 As tough a proposition as facing Francisco Liriano may be, the Yankees are less likely to face him a second time than the Twins are to face CC Sabathia (AP).

So long as the series isn't a sweep in either direction, what the move does is ensure that the Yankees get their best pitcher to the mound a second time before they potentially face elimination, and that's a luxury that the Twins don't have. As brilliant a pitcher as Francisco Liriano can be when his health is in order, he's also a fragile one. He has just one major league start on three days' rest, and it came back in September 2005; in fact, it was his first major league start, and it merely followed a one-inning relief stint. One Tommy John surgery and a couple of lost years later, he's yet to work on short rest again, and the Twins won't start doing so here. That means they won't get their ace back on the hill until a Game Five that may never come. As Leo Durocher famously said, "You don't save a pitcher for tomorrow. Tomorrow it may rain," but here the Twins no choice.

2. The Yankee Rotation's Order: Decidedly more second-guessable than the three-man rotation is the decision to have Andy Pettitte start Game Two and a potential Game Five, both at Target Field, leaving Phil Hughes to start Game Three in Yankee Stadium. As I pointed out on Monday, Hughes' flyball tendency plays much better in spacious Target Field than Yankee Stadium, where he allowed 20 of 25 homers this year.

Having first pointed out that imbalance days ago, it's only fair to walk it back just a bit. Despite the imbalance of that split, Hughes' ERA split between home and road was just 4.66/3.47. Once you normalize for the home runs per fly ball rate via the xFIP estimator (which also uses strikeout and walk rates to gauge what a pitcher's ERA should have been), you find the spread between the two is even less: 4.76 at home, 3.99 on the road. Mind you, that's not exactly good news, but the difference isn't as great as it's been made out to be; one way or another, Hughes needs to summon his early-season form to succeed.

As for Pettitte, the best you can say is this: he's the most experienced postseason pitcher ever, and for all the squeamishness those of us in the cheap seats may have about the fact that he averaged just 4.4 innings per start in his return from the disabled list while topping out at 88 pitches, we're not the ones watching his side sessions (and Hughes') and taking his temperature, nor are our seasons or even our jobs on the line. Joe Girardi is placing a lot of eggs in Pettitte's basket, but under the circumstances, it's a question of choosing between two dicey options, not an obviously good one and an obviously bad one.

3. Lineup Lefties: Both the Yankees and the Twins have several left-handed bats in their lineups: Robinson Cano, Curtis Granderson and Brett Gardner for the Yankees, Denard Span, Joe Mauer, Jim Thome and Jason Kubel for the Twins. None of those players hits southpaws as well as they do righties, and they'll see plenty of southpaws this series. What the Yankees' rotation potentially does is throw two of them at the Twins in a three-game series, three in a four-game series, or four in a five game series. The Yankees could face two in a three-game series in Lirano and Brian Duensing, but at most they'll face three in a five-gamer.

Considering handedness, the performance gaps between the two teams' lefties aren't all that far apart, but their footprints are unequal; the Yankees' trio could face lefties three times, while the Twins' quartet could face lefties four times. Furthermore, there's the issue of surrounding casts. The Yankees' lineup also includes switch hitters Mark Teixeira, Jorge Posada and Nick Swisher, who always have the platoon advantage and who can provide some serious sock, and righties Derek Jeter and Alex Rodriguez, of whom you may have heard. They've also got a solid DH platoon in Marcus Thames and Lance Berkman, each shielded from their respective kryptonites. There are whispers Girardi may choose to swap out Gardner with righty Austin Kearns against southpaws at least against Liriano tonight to further minimize the lefty footprint, but nothing's been announced at this juncture. For the Twins, the the only switch hitter around is the relatively light-hitting Orlando Hudson. Righties Delmon Young and Michael Cuddyer have some pop, but Danny Valencia and J.J. Hardy considerably less so, and in fact the latter has shown a gruesome reverse platoon split over the past two years, likely owing to a series of wrist injuries.

The Twins do have two lefty relievers on their roster in Brian Fuentes and Jose Mijares, but the Yanks chose to take just one in Boone Logan, skipping the eminently skippable Royce Ring. That can close the gap a bit, particularly in high-leverage late-inning situations, but remember that the Yankees' lefties are also more capable of pitching a bit deeper into games than the Twins' lefties. Sabathia and Pettitte averaged 6.7 innings per start even with the latter's injury, Liriano and Duensing 6.3; the difference between the aces is wider (7.0 vs. 6.1).

The bottom line is that Minnesota's lineup appears to be the one much more vulnerable to southpaws in the balance. I think that's the real difference in this series.