Share All sharing options for: James "The Maccabee" Shields

Now we know why the Rays chose James Shields to start in Game 2 of their series with the Rangers: the international Jewish conspiracy:

A woman called into a sports radio show down in Tampa and opined that the Rays chose to go with James Shields in Game 2 of the ALDS "because he is a Jewish person." The caller -- Linda, who claimed to be a Quaker "and has many Jewish friends" -- thinks that "he's not a very good pitcher" and that Joe Maddon felt pressure from the team's "Jewish ownership" to start Shields over Matt Garza. 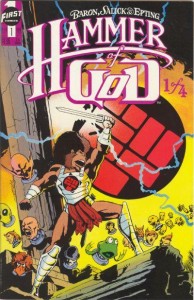 Part of the classic series "Nexus," not a conspiracy. But believe what you want.

(1) I wonder if this is the same woman who (in)famously confronted John McCain about then-candidate Obama, that nervous shaggy creature in the red shirt.

(2) Funny thing about Jewish conspiracies: I've never been invited, and I've certainly never been paid. I keep looking in the mail for my check, but it never comes. Growing up, I had little family beyond my parents' generation because everyone before that was wiped out in the Holocaust, so I have that inheritance, but beyond that, I'm still waiting to be cut in. I shouldn't joke about this, because too many people apparently believe it and it has had many tragic consequences, like the one I alluded to just a sentence ago. It's just so incredibly asinine that it's hard to do anything else. For every Rothschild or Sam Goldwyn in Hollywood there are 500,000 Jews trying to make ends meet, just like everybody else, and often screwing over each other, just like everybody else. Jews are, you know, people. They have to earn their breaks just like everybody else, even James Shields.

As I said in this morning's post, there are good reasons to think that Shields' mediocre showing might not be as bad as it first appears. He had a career-high strikeout rate, his walk rate was very credible. His stuff was there. I suspect that at worst he has been suffering a mechanical problem where certain pitches get elevated and then tagged. I would have gone with Matt Garza if I was making the call, but this isn't the worst postseason pitching selection ever made--you could name 10 worse, like Billy Martin skipping Ed Figueroa to pitch an injured Catfish Hunter in Game 2 of the 1977 World Series. Even the players were publicly second-guessing that call. What they didn't know was that it wasn't Martin's call--it was dictated by the International Confederate Conspiracy, in which undeserving pitchers from formerly rebellious states try to win the Civil War by pitching baseball games.